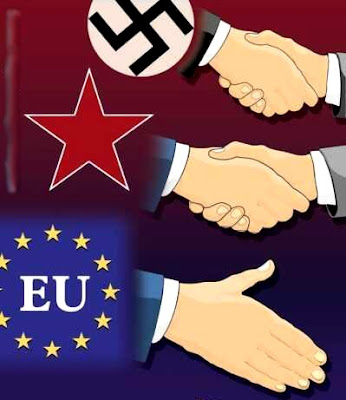 Q. Why does big money love totalitarian dictatorship so much?
A. Power. The bankers want power over humanity. Dictators need money. It’s become a bit of game.

Here are a few paragraphs from the second chapter of The World Order – A Study in Hegemony (1985) by Eustace Mullins.

The Communist Revolution of 1917 was planned, supervised and financed by the global financial elite.

The concept of political ‘Left wing’ and ‘Right wing’ is just a charade, created for us by the global elite – to give us an opposition, an enemy to blame; to keep us fighting amongst ourselves. Read on…

as one of the victors, solely because she was needed as the next “evil empire”

against which the civilised West could launch a new Crusade. Because Russia was

bankrupt, had lost 40 million of her population in the war, plus another 66 million

murdered by the Bolsheviks since 1917, and was unable to feed herself, once again

material from the U.S., in order to maintain an “enemy power”.

The Belgian Relief Commission of 1916 became the Marshall Plan of 1948. Once again, the loads of

supplies were shipped into Europe, ostensibly for our Allies, but destined to

toured Russia during the latter part of the nineteenth century, bringing in money

called for to support an entire regime. Kennan also aided Schiff in financing the

Japanese in the Russo-Japanese War of 1905; the Japanese decorated Kennan with

the Gold War Medal and the Order of the Sacred Treasure. In 1915, the American

International Corporation was formed in New York. Its principal goal was the

coordination of aid, particularly financial assistance, to the Bolsheviks which had

previously been provided by Schiff and other bankers on an informal basis. The

new firm was funded by J.P. Morgan, the Rockefellers, and the National City

Bank. Chairman of the Board was Frank Vanderlip, former president of National

City, and member of the Jekyll Island group which wrote the Federal Reserve Act

of the National City Bank; A.H. Wiggin, and Beekman Winthrop. The 1928 list of

Loeb Co., and Frank Altschul of Lazard Freres. In their program of aiding the

founder of the First National Bank; August Belmont, representative of the

president of the U.S., Levi Morton, who was a director of U.S. Steel and the Union

director of Union Pacific; H. McK. Twombly, who married the daughter of

William Vanderbilt, and was now the director of fifty banks and industries;

No one would seriously believe that bankers of this magnitude would

finance an “anti-capitalist” revolution for the Communists, yet this is exactly what

Peace Conference, when he said, “There is moreover a voice calling for these

definitions of principles and purposes which is, it seems to me, more thrilling and

world is filled. It is the voice of the Russian people. There are men in the United

bring about.” (The Great Conspiracy Against Russia, Seghers and Kahn.) The

men of “the finest temper”, to whom Wilson referred, the Morgans and the

Rockefellers, did not really desire opportunity for the individual; what they desired

was the lifelong imposition of slavery under the World Order, and this is the goal

which they continue to strive to achieve, on a world wide basis.

The Illuminati & Dictators
There Plans, however, sometime don’t work out the way they want them to. Vladimir Putin was supposed to be the Puppet, But it has turned out that the Puppet is now the Puppet Master.
A Nationalist, not an Illuminati Puppet like Stalin.

This is why ‘Honest as the Daay is Long & Electioneer Fraudster’ & Ace Trouble Maker Hillary Rodham Clinton, is now causing so much Trouble.
Putin is nobody’s fool. For those who think he is, it will be to their detriment.
Putin kicked out Nieslev and Bereshovsky and arrested Khordokovsky. He basically kicked the Rockefellers and Rothschilds out of Russia. India kicked them out in Ghandi’s day and they have never been allowed back. Having liberated themselves after 300 years of Illuminati (East India Company) rule.

Many attempts have been made by the Illuminati to infiltrate and dominate China. They financed Chairman Mao but he then kicked them out in the 1960’s (that is why China and the USSR nearly went to war then. I gave a rference 2710/11 Chinese Secret Society Challenges Illuminati
By Henry Makow PhD Link:- http://www.rense.com/general77/chinsec.htm

A Chinese secret society with 6 million members, including 1.8 million Asian gangsters and 100,000 professional assassins, have targeted Illuminati members if they proceed with world depopulation plans, according to Tokyo-based journalist Benjamin Fulford, 46.

“The Illuminati, with the exception of Japan, is very much a white man’s game,” Fulford says

“The Illuminati, with the exception of Japan, is very much a white man’s game,” Fulford says. Fulford yet again appears to be better informed than most Politicians, & as can ber seen thing dont always pan out the way the Illuminati would wish. The article is well woth reading.

2 Responses to “Soviet Russia – Land Of Opportunity For The Rich”