Eustace Mullins begins by talking about himself as being the last protégé of Ezra Pound.

The main subject matters of this interview are – of course – the instigation of war for profit, corporate banking power, the Federal Reserve System, which Mullins calls ‘the greatest swindle in history’; fiat currencies, economic crashes, fluoride, etc.

As to the question of why the global corporate banking cabal funded Communism, Mullins states that ‘bankers consider Communism and dictatorships a good investment’ – and in episode four he does, although very briefly, mention the Jesuits (with regard to Gorden Logan’s comment last week).

The first few episodes (of 10) can be hard to find, see links below.

Some sections of the interview are repeated.

Merry Christmas To Everyone,

The message in the video is hardly Happy Christmas. It’s the harsh reality people prefer not to know. Thanks for your contributions, Scotty. I found this video fascinating, telling me more in ten minutes than you learn all year watching broadcast TV networks. The Tap Blog has some really good researcher/writers. I have learned more from what people like you send in to The Blog than I have ever written/found myself! Then again I am only one person, and it is natural enough for the work of many to exceed that of most individuals!

I love what Mullins says about the mighty James Joyce being considered ‘a terrible writer’ until Ezra Pound whipped him in to shape. Really made me laugh…myth-busting, giant killing at it’s best!
Just the same as Hemingway, W B Yeats & T S Eliot – all four of these men were tutored by Ezra Pound and were awarded Nobel Prizes as a result. 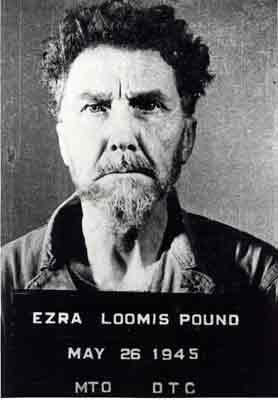 Ezra Pound, photographed by US Armed Forces Italy, branded a traitor. How come? He just brought the war in Italy to an end. Should have been a hero.

And Ezra Pound ended WW2 in Italy, labelled a traitor by the US and held for 25 days in steel cage, outside – resulting in a nervous breakdown. After this, Pound was declared insane and locked in a mental hospital.

He’s not the first man to be completely broken by the authorities for being too honest & telling it how it is…maybe that’s a more fitting Christmas message.
IXOYE

WIKIPEDIA On EZRA POUND in WW2

Pound came to believe during the 1920s that the cause of the First World War was finance capitalism, which he called “usury,” and that the solution was C.H. Douglas’s idea of social credit, with fascism as the vehicle for reform; he had met Douglas in The New Age offices and had been impressed by his ideas.[64] He presented a series of lectures on economics, and made contact with politicians in the United States about education, interstate commerce and international affairs.

When Dorothy’s mother died in October 1938 in London, Dorothy asked Pound to organize the funeral, where he met their 12-year-old son Omar for the first time in eight years. He visited T. S. Eliot and Wyndham Lewis, who produced a now-famous portrait of Pound reclining. In April 1939 he sailed for New York, believing he could stop America from involvement in the Second World War, happy to answer reporters’ questions about Mussolini while he lounged on the deck of the ship in a tweed jacket. He traveled to Washington, D.C. where he met senators and congressmen. Mary said he did it out of a sense of responsibility, rather than megalomania; he was offered no encouragement, and left depressed and frustrated. He received an honorary doctorate from Hamilton College on 12 June, and a week later returned to Italy.[67] He began writing antisemitic material for Italian newspapers, including one entitled “The Jews, Disease Incarnate.”

He wrote to James Laughlin that Roosevelt represented Jewry, and signed the letter “Heil Hitler.” He started writing for Action, a newspaper owned by the British fascist, Sir Oswald Mosley, arguing that the Third Reich was the “natural civilizer of Russia.” After war broke out in September 1939, he began a furious letter-writing campaign to the politicians he had petitioned six months earlier, arguing that the war was the result of an international banking conspiracy, and that the United States should keep out of it.[68]

Scotty said…
Thanks for your comments regarding my contributions Tap. I’m only repeating what I’ve learnt elsewhere. But that’s what’s amazing about the internet, it’s a worldwide open forum – we can all pop in and out whenever we like, see what’s been said, add a comment. Once you have a subject you’re interested in, it’s fairly straightforward to follow a trail of information left by others on the same quest for understanding.

Constance Cumbey said that she researched for 10 years before writing The Hidden Dangers of the Rainbow (1982) as she had to read every book herself. Many of those weird Theosophical and Occult books are huge – I wouldn’t want to have to plough through them, it would take forever. Nowadays, with the internet, it might be possible to do the same level of research in under a year, as there are many individuals who will have read books you’re interested in and are happy to tell you all about them, give you quotes etc.

The internet is the most important development in knowledge & learning since the printing press – no wonder TPTB are desperately trying to label people as crackpots and ‘conspiricy thoerists’. They have been very successful at this, as well. Start talking to some people about what’s really going on and they actually become defensive. The cows, contentedly grazing in the field, don’t want to hear any nasty stories about a place called an abattoir and what goes on there – you’re just trying to scare them, you nutcase. And that’s because having your worldview interfered with is scary.

If what we find out is true and we are prepared to acknowledge these new truths, then what happens is a personal, inner paradigm-shift, an inner-earthquake. Not a pleasant experience. Something akin to what I imagine a teenager would feel upon finding out that they’re adopted. Nothing is what you think it is and everything is different from here on in. Painful – but, I believe, necessary.

Then again, there a lot of people around who quite literally don’t care, unless things directly effect them. That’s what an old school friend told me recently, quite openly. The man’s not stupid, he’s a published writer – these attitudes are deemed to be acceptable nowadays.

The only question is, for how much longer will the internet exist in it’s present form, where people can find out about politics, global power, war etc? They will have to take it away from us slowly. If they take the internet away tomorrow, there will be big trouble. You’ve gotta boil that frog slowly. It won’t mind then. It won’t even notice, until it’s too late.