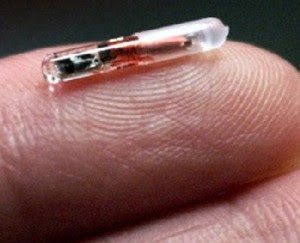 This story sent in by Julia suggests that microchipping humans is nothing new, and there have been experiments going on for twenty or more years.

Mr Honore, 54, added the metal piece was implanted in him during an operation at AH more than two decades ago – the last time he had undergone surgery in his chest and lung.

Represented by lawyer Oliver Quek, the former seaman said that he was stabbed in the lung in May 1988. After his discharge, he kept hearing voices in his head and could not lead a normal life. He would also feel generally unwell and would even cough out blood.

“(Mr Honore) also discovered and experienced that strange people on the streets would approach and speak to (him) about strange subject matters or pass strange irrelevant comments,” according to the papers filed.

Mr Honore said that his subsequent discovery of being constantly tracked left him in a “perpetual state of apprehension and fear for the safety of his life”. It also prevented him from holding on to a job.

When he returned to Singapore in December last year to investigate his condition, he claimed that he was turned away by AH which said it had no records of his stay.

He claimed that two X-ray scans later on May 9 this year at AH and Mount Elizabeth Hospital found the metal fragment (microchip) in his left chest wall instead of his left lung.

He also claimed that, earlier this month, he underwent an operation at Mount Elizabeth Hospital to remove the fragment.

In his lawsuit, Mr Honore is now alleging that employees of AH who had then operated on him implanted the microchip in him intentionally, causing “exceptional harm and lifelong suffering”. He also said that the alleged act constitutes a trespass on his body.

Mr Honore claims that he suffers from various conditions following the alleged act, such as impairment of relationship, loss of enjoyment of life and suicidal thoughts.