The film was made by Warner Brothers. The Wikipedia page on them is interesting including this: “As the studio prospered, it gained backing from Wall Street, and in 1924 Goldman Sachs arranged a major loan. Oh not them again! It also says they were starting to make films by the time of WW1. That sounds like handy timing to me.

How sick is this? 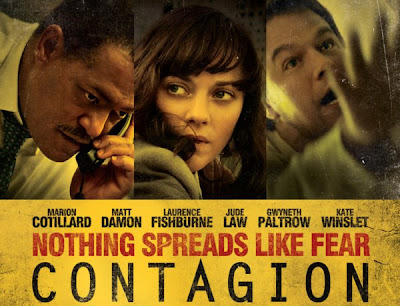 Julia’s original post – I have just sat through the movie Contagion. It is a disaster movie about a worldwide flu epidemic! Knowing what I know, it is very obviously a government propaganda show that cost $60 million to make, thinly disguised as fiction with famous actors.

It is preparing the way for a real flu epidemic. There are some very clear messages in the film: … The blogger who exposes the truth (this could be modelled on you Tap) turns out to be a liar and a crook who makes $4million, whilst he was accusing those nice pharmaceutical people of doing the same! The 12 million gullible idiots who follow him and trust him donate for his bail money (starting to sound like Julian Assange). The message is Don’t Trust The Blogger. Trust the Government and the Pharmaceutical companies. … The virus originally came from a bat, then to a pig, then a human. Lots of government officials and WHO experts work really hard to work out the single source, risking their lives. The message is Flu Epidemics Come From Animals. … The vaccine is released untested and people are saved. The message is Its OK not to test the vaccine and break all the normal safety rules because we are saving lives.

Vaccines are good. … The blogger was recommending a natural plant cure. This turned out to be false and a hook for making a profit. The message is Natural Remedies are a waste of time and you are being ripped off. Unfortunately lots of people will watch this and get all these messages implanted subliminally in their brains. You and other bloggers are being framed.

TAP. At last the recognition we’ve craved all along!!! When I worked in politics, I always said you judge your impact by how severely your opponents react. By that measure, we’re doing an excellent job warning people of the dangers of vaccines. They’re spending tens of millions trying to reverse the tide of people who realise vaccines are being used to reduce population, just as Bill Gates tells us they are!

It’s like advertising. The more they spend on advertising, the more sure you can be that you should never buy the product. If it was any good, people would be telling each other.

Switch off your TV, Julia. No, seriously. That’s a good post. Thanks – your second isn’t it? Keep ’em coming! It’s interesting how they’ve gone from depicting bloggers as irrelevant social inadequates, to portraying us as the baddie in the pantomime, equipped with evil schemes designed to harm humanity.

You know something? I think we’re getting to them!

Here’s another movie worth watching – Ron Paul’s one minute –

Ron paul doesn’t mind us bloggers. That’s because he agrees with us.

What scare story are the narrative-writers going for next? Fear of earthquakes? wars? financial crashes? NO! The movie ‘Contagion’ demonstrates that the greatest threat to the world is none of these. It is now unquestionably people like us who write The Tap – bloggers. You know, pasty-faced spotty social inadequates, who eat atrociously, and never sleep, tapping away on a keyboard in the cellar of their mother’s house til 4 am, viewing the world from behind the thickest lenses opticians can find.

They’re updating their views. We’ve gone from the inadequate and the incapable, to the capable but selfish and evil. It’s progress of a kind. Here’s the first of 13 clips on youtube if you can bear it!