UPDATE 7th December 2011. Gordon Logan replies to request in comments, viz. Could Gordon give some more information on the McKinnon motion. Ta!

Here are some impressions and implications of the extradition debate.
Ultimately the extradition debate arose from remarks made on 10th October by Lord Carlyle, the government’s anti-terrorism adviser. He compared the McKinnon case with those of the Muslim terrorists. He was no doubt well aware that McKinnon’s case was attracting embarrassing public attention to these individuals and that MI6 does not want them to be extradited because they are MI6 agents.

Lord James described in a long speech in the House of Lords last November how he had managed the finances of Irish and North African terrorists at the Bank of England to the tune of not millions, but billions. So MI6 underwrites much of the world’s terrorism. If the cases of Aswat and Al-Masri are opened up, there will be hell to pay. Dozens of civil servants and intelligence officers might start talking, as Lord James did. The extradition of McKinnon risks opening up a massive can of worms that will awaken the House of Commons from its slumbers.

Some of the MPs who attended last night’s debate will be aware of the significance of the Aswat and Al-Masri case, either as insiders or as suspicious outsiders. The suspicious outsiders will also be aware that fairly common knowledge can now be dangerous in Britain. A career is easy to terminate in a variety of ways, if necessary with ‘extreme prejudice’ as in the case of Robin Cook.

The debate itself benefitted from the legal talent of some of the speakers, and it was heartening to hear the Tories referring to ancient civil liberties such as Habeas Corpus, which apparently goes back to the Anglo-Saxon Dukes of Kent. Deep down in the Conservative Party (under the money) there still seems to be some old-fashioned common sense.

The Rothschild New World Order wants none of that, and is sweeping away ancient fundamental liberties in the United States and in the United Kingdom. Laws have also been passed in much of Europe to prevent the exposure of holocaust lies, even by lawyers in courts of law. I was told by MI6 that the British government secretly implemented an Israeli Knesset ‘World’ law that required the covert harassment and even persecution of individuals who had discovered the holocaust fabrication.

So our government secretly persecutes British subjects on behalf of the Knesset. There is good reason to believe that other Israeli/Rothschild operations are protected in this way, for example the 7/7 bombings and the 9/11 attacks. That would explain the constipation of the British mass media where these subjects are concerned.

The Party Conferences have proved how self-censorship has hamstrung political discourse in the UK. Similarly, last night’s debate avoided the secret issues that we have raised here. Nevertheless, the debate was the House of Commons ‘at its best’, with no three line whips and plenty of talk about ancient liberties.

I don’t see Gary McKinnon being extradited after this debate, particularly in the light of John Loftus’ revelations about the MI6 backers of Aswat and Al-Masri. There is now a real possibility of getting the government to reform the extradition laws in a way that will prevent British subjects from suffering punishments abroad that are not commensurate with what they would suffer in the UK.

Lastly, it might be worth mentioning that the Israelis hardly ever extradite Jews to other jurisdictions. This is because the Talmud embodies a dual legal system that favours Jews as opposed to non-Jews. While Jews allow themselves to be exclusive, they promote the melting pot for the rest of us. Maybe Britain should merely copy Israeli legislation on extradition. Mr. Susman wouldn’t like that either. 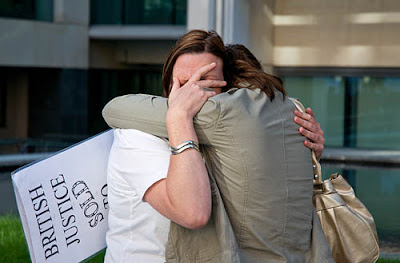 LONDON, UNITED KINGDOM – 02.09.08. Lucy Clarke, the partner of British hacker Gary McKinnon is comforted by a supporter as she cries during protest outside the Home Office London, England on Tuesday 9th September 2008.

UPDATE from Gordon Logan 6th December 2011 Good news. The Commons has just passed the McKinnon motion without a ‘nay’. Vauxhall Cross knows how to deliver. But it takes a boot in the backside. See report from Guardian.

Here is a piece about tomorrow’s debate on the Extradition Treaty from Gordon Logan, giving interesting details, such as Nick Clegg is an MI6 asset, and repeating his earlier revelation that, because of the Trident deal made by Mrs Thatcher, Britain is obliged to go to war when commanded by the POTUS..

BACKGROUND –
The case of Gary McKinnon has caused a split between MI6 and their globalist masters. Because of pressure brought to bear by globalist heavyweights who had flown over specially from Washington, Justice Scott Baker capitulated overnight and delivered an absurd judgement on the manifestly inequitable 2003 Extradition Act, determining that Mr. McKinnon should be deported to face trial in a country whose judicial system is now beyond the pale, as is evident from Section 1031 of the National Defense Authorization Act, which has just been passed by the US Senate.

The absurd Scott Baker decision in McKinnon’s case inevitably gave rise to comparison with other cases, where the judiciary has been extremely reluctant to hand down a decision on extradition for the simple reason that those involved, such as Haroon Aswat and Abu Hamza Al-Masri, are MI6 agents. Haroon Aswat was behind the 7/7 bombings and Al-Masri set up dozens of terrorist training groups that have provided thousands of brainwashed psychopaths for destabilizing governments all over the Middle East and elsewhere.

MI6 has responded to the threat posed to these agents by activating its assets in London. Nick Clegg and Menzies Campbell have suddenly leapt to defend McKinnon, after hanging him out to dry for months. Liberty, (which hung me out to dry), has rushed to give an award to McKinnon’s mother for her many years of activism.

The result of all this will be a free debate on the 2003 Extradition Act in the House of Commons tomorrow. Last week, US Ambassador, Louis Susman, paid two insolent visits to the Mother of Parliaments in order to make sure that British MPs knew exactly how they were expected to vote. Susman’s message was clear: “someone took down our whole defence system in a computer hacking incident. That made us very vulnerable”.

This statement gives a clear indication of what McKinnon can expect from the new American judicial system. What Susman said was not merely a gross exaggeration, it was a lie. McKinnon did not take down the US defence system. He used a few very simple methods, such as guessing obvious passwords, in order to find out if the Pentagon computers had any information about ‘little green men’. His hacking was of the most elementary nature and quite insignificant when compared to the magisterial exploits of the Chinese and the Russians, who would never dream of delivering their nationals into the hands of Washington.

Moreover, let us not forget that the Pentagon has delivered more tragedy and grief over the last fifty years than probably any other human institution – lately at the rate of about two hundred thousand deaths a year. McKinnon didn’t hack into the website of the Virgin Mary.

I have pointed out before that the root of the British Prime Minister’s subservience to Washington is a secret clause in the Trident missile treaty signed by Mrs. Thatcher. That clause requires the Prime Minister to go to war when the POTUS demands it.

McKinnon is to be made an example of, not because he is a super-hacker, but because the British government is the government that is most likely to capitulate to the demands of Washington. Tomorrow’s debate is an opportunity for Members of Parliament to regain some of the public respect that they have manifestly lost in the last few years. Even at the risk of incurring the wrath of Mr. Susman.

“The Royal Prerogative is part of the Personality of the Monarch and could not be taken from them even by an Act if Parliament” which the Law Lords Halbury and Jowitt agree. (Halbury’s Laws, The Birth Right of the People of England……..

Since the Assent is given under the regal ‘Prerogative Power,’ it is invalid if it is given to an unconstitutional act. So in a different way, both Counsel’s opinion and Elizabeth’s lead to the same conclusion.

Therefore, she says that one can conclude that ALL of the bills that have been made law since 1911, which includes 1972 entry into Europe, and all that follows, together with the Civil Contingencies Bill, the Constitutional Reform Act, Equality Act and the Immigration Act ARE VOID.

It is clear that our entry into the European Union is INVALID, ILLEGAL and against our Constitution.

“Understand this, if the English Constitution is destroyed so will be the civilisation of the world”……….
For readers to understand. KNOW THIS.
The ‘prerogative power’ is given to the monarch by the PEOPLE, under the Bill of Rights of 1689 and Magana Carta. The monarch agrees to protect our laws and customs under the Coronation Oath and the Constitution. Failure do so is TREASON against the people! We are protected from GESTAPO type (executive) law by the ‘prerogative’. This is what the New World order is trying to take away from us. This is our ancient law. Therefore, why has the monarch signed FIVE illegal treaties taking us into a crimalised organisation -the EU which is completely against our Constitution??

Elizabeth gave the following information for our American readers: As far as the American Constitution is concerned, Jefferson and co made a Masonic Constitution, but they did not wipe out the existing British Constitution on which the colonies had lived for two hundred years. This is the basis of your law and customs

1). Magna Carta, (which the Supreme court used for the release of the people in Guantanamo Bay

TAP Has the Royal Family become a branch of the Rothschilds, with parentage not correctly reported of many in the line of accession? Examine the evidence. Are both Britain and the USA nothing more than colonies of the elite central banking families, who secretly took control?

The thing is though, how can anyone ever challenge this constitutional law breaking, when the judicial system
is also run by these evil controlling powers that be? They have got us the people completely stitched up as far as I
can see.

They(tptb) are busy right now whipping-up WW3 and the majority of the populace are so dumbed-down and downright stupid
that they will go along with the official line as per usual. Most of them don’t seem to want to know the truth and wouldn’t
recognize it if it came gift-wrapped.

I have to hand it to you and others such as David Icke, who have been telling people the truth, in Icke’s case for about 20 years
or more now. Personally, I think I would have given up in despair. Ultimately, most of the cretinous populace will get what they
deserve. Oh dear, did I just commit that bleak thought to writing. Sorry Tap, it must be Monday morning blues or something.

6 Responses to “Is Britain A Colony Of The USA?”