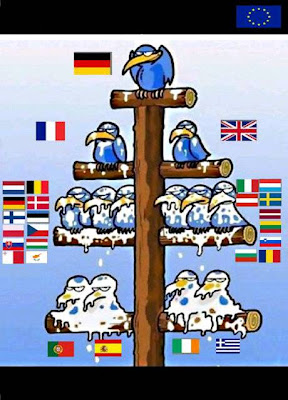 Is this a picture of how the EU works, or of who the masters are on the European football field? Either way, it’s a great cartoon. Sent out by Roger Helmer MEP’s office. In fact football and politics are closely related events, with the latter orchestrated to ensure the right result for the former. Just think of the Eurovision Song Contest, and you would find it easy to believe that results of international contests can be easily rigged.

In the World Cup, why don’t they use TV to verify disputed goal decisions, as they do in tennis and cricket and most other sports? The answer is that they don’t want the correct sporting result. The want the correct political result, with referees well aware of what that is, and managers and team captains. Big money is also involved. Any team manager who threatens not to comply with his instructed position can expect trouble. If a quarter final position is being offered, for example, he had best accept it, or else.

Why else is England always supplied with a foreign team manager, such as that cartoon Italian we had last time? He knows the score, when it comes to obeying corrupt and powerful bureaucracy. Football is the least of their concerns. Maybe that’s what Gary Speed refused to acknowledge last week when he visited Brussels.