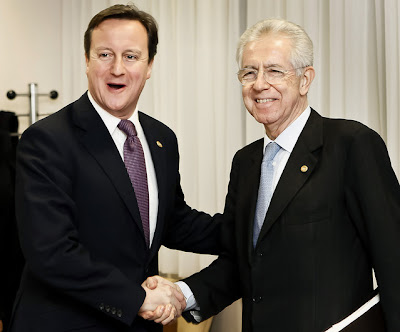 Whatever Cameron’s latest moves signify, in which he pretends to be ‘vetoing’ an EU Treaty, when he is doing no such thing, you have to bear in mind who he is. His mother is a Levita, which means Cameron is a Jew with a right of return to Israel. The Levita family created The Standard Bank, and has huge wealth based on the banks’ position. Why would he of all people try to stop the process towards One World Government by banking elites, of which he is a part, and which placed him into position?

The Euro is designed to collapse at some point, causing a major financial crisis, to which the bankers will offer a lifeboat on condition they are appointed as the one world government with minimal democratic accountability.

Cameron is only a step on the ladder towards the elimination of democracy, and the formation of totalitarian structures. Once Britain’s debts are allowed to be noticed by the world’s bankers and the same pressures that are being brought to bear on the PIIGS, start being applied in the UK, which gauleiter will be appointed as our imposed governor to represent the interests of the bankers?

Here is one well known member of the Trilateral Commission, who could be a prime candidate – 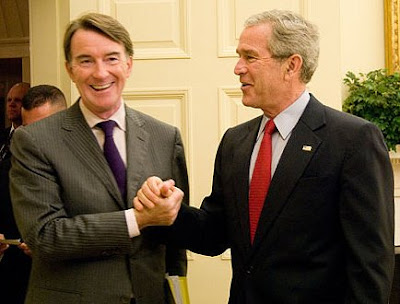 Here is the full list of candidates, including Peter Mandelson, Rachel Lomax and others who could be the figurehead of Britain’s first appointed government since Parliament first started limiting the totalitarian power of kings.

Here is a good article from Global Research which tells the story.

Demise of the Euro: Part of a Long-term Plan for a Global “Super-currency” controlled by the Banksters

Efforts by European leaders to shoe-horn a range of diverse countries into a rigid financial cage are doomed to fail. But that’s all part of a long-term plan for a global super-currency which can only bring more hardship to ordinary working people.

A question that more and more people are asking nowadays is, “What on Earth were the Europeans thinking when they agreed to have just one currency for all of Europe?”

In Greek mythology, Procrustes was the son of Poseidon, God of the deep blue seas. He built an iron bed of a size that suited him, and then forced everybody who passed by his abode to lie on it. If the passerby was shorter than his bed, then Procrustes would stretch him, breaking bones, tendons and sinews until the victim fitted; if he was taller, then Procrustes would chop off feet and limbs until the victim was the “right” size…

This ancient story of “one size fits all” seems to have made its 21st Century comeback when Europeans were coaxed into imposing upon themselves an oxymoron; a blatant and conceptual contradiction they call “the euro”.

This common supranational currency invented by the French and Germans, boycotted by the UK, ignored by the Swiss, managed by the Germans and accepted by the rest of Europe in blissful ignorance, has finally dropped its mask to reveal its ugly face: an impossible mechanism that only serves the elite bankers but not the working people.

It masked gross contradictions as large, far-reaching and varied as the relative sizes, strengths, profiles, styles, histories, econometrics, labor policies, pension plans, industries, and human and natural resources of the 17 Eurozone nations, ranging from Germany and France at one end of the scale, to Greece, Portugal and Ireland at the other.

As we said in a recent article, the euro carries an expiry date; perhaps the eurocrats who were its midwives a decade ago expected that it would live a little longer, maybe even come of age… But they certainly knew that, sooner or later, the euro would die; that it was meant to die.

Because the euro is not an end in itself, but rather a transition, a bridge, an experiment in supranational currency earmarked for replacement by a far more ambitious and powerful global currency issued by a global central bank, controlled by a cabal of global private bankers, obeying a New World Order blueprint emanating from a private Global Power Elite.

The problem today is that what impacted Europe as a financial ripple effect in 2008 has now grown into a veritable financial tsunami threatening to swamp the whole euro system… And more big trouble lies ahead!

In fact, today’s euro-troubles are nothing more than one of many variations of sovereignty-troubles. Because when a country’s leaders irresponsibly cede a part or all of its sovereignty – whether monetary, political, financial, economic, judicial or military – it had better take a really good look at what it is doing and what the implications are for the medium and long term.

Ceding national sovereignty means that somebody else, somewhere else, will be taking decisions based on other people’s interests. Now, as long as everyone’s interests coincide, then we are OK. But as soon as the different parties’ interests diverge, then you are confronted with a power struggle. And power struggles have one simple thing in common: the more powerful win; the weaker lose.

Now, we have a huge power struggle inside the eurozone. Who do you think will win? Who will impose new policies – Germany or Greece? France or Portugal? Britain or Spain? Germany or Italy?

And that is just on the public scene. You also need to look at the more subtle, less media-highlighted private scene, which is where the real global power decisions are made.

Will the new Italian PM, Mario Monti, cater for the needs of the Italian people or for the mega-bankers’ lodge sitting on the powerful Trilateral Commission of which he himself is European chairman? The same question goes for Greek president Lucas Papademos, also a Trilateral member. The same question goes for all the governments of the EU member states where the real power brokers are the major bankers, industrialists and media moguls sitting on the Trilateral, Bilderberg, World Economic Forum and Chatham House think-tanks and private lobbies.

Global elites will do everything to keep the euro on its transitional path towards a global currency that will eventually replace both the euro and the US dollar. This entails engineering the controlled collapse of both currencies, whilst preparing the yellow brick road for a “Global Dollar” or some such new oxymoron.

The US dollar will be easy to collapse: all that is needed is for the mainstream media to yell, “The dollar is hyper-inflated!!” and the Naked Emperor Dollar will fall swiftly. The euro, in turn, will simply break up as its member nations revert to the old days of pesetas, lire, francs, escudos and drachmas…

Is the time ripe for that? Maybe not… yet. So, no doubt we will still see more “emergency treatment,” more “financial chemotherapy” to “bail out the euro” just as we’ve seen them “bail out the banks,” even though most banks and the Oxymoron Euro cannot be salvaged but just kept artificially alive, like the “Living Dead…”

So, here’s a question for Greeks, Italians, Spaniards, Portuguese, Irish, even the French and Germans: will you accept the invitation by your Procrustean Leaders in Brussels to lie down on their bed?

TAP Britain will more likely not become a Euro member. But our debts will be used to send in equivalent totalitarian power, and force sterling’s absorption into a one world currency, for which the eurozone is only a stepping stone. We’ll end up in the same boat, but by a different route – unless Cameron actually does start making his way towards financial independence from world government. He won’t.