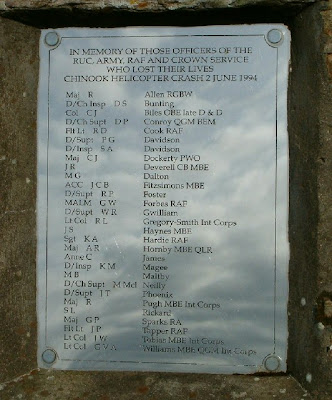 Click to expand. The Chinook Monument, Mull Of Kintyre.

I also would like to bring to your attention, another Article by Finian Cunningham
Britain’s Cover-Up of Inside Job in Fatal RAF Chinook Crash
Evidence points to liquidation of British counterinsurgency team to trick Irish republicans into a defeating political process.

To emphasise the fact that those who govern us are nothing but a ‘BUNCH of SCUMBAGS’
the stuff you wouldn’t wish to tread in whilst walking, if you came accross it.

For 17 years the British authorities have lied about the fatal RAF helicopter crash on the Mull of Kintyre in which 25 senior counterinsurgency personnel were killed. Now Global Research reveals new evidence showing that the loss of life was an intentional act of sabotage.

It was the worst single loss of life by Britain’s Royal Air Force since the Second World War. On the evening of 2 June 1994, an RAF Chinook military helicopter slammed into a mountainside on the Mull of Kintyre in thick fog, killing all 29 onboard. Among the dead were four RAF crew and 25 of Britain’s senior counterinsurgency personnel. The latter – including British Army officers and mainly members of the Royal Ulster Constabulary – had overseen Britain’s “dirty war” operations against Irish republican militants during 25 years of conflict in Northern Ireland. ………….Independent investigation

But a private investigation into the circumstances of the crash has now revealed exclusively to Global Research that the official account is seriously flawed. Disturbingly, there are sound reasons and evidence to indicate that the Chinook was brought down deliberately with the intention of wiping out the counterinsurgency team. And, as we will see, there is a technical “smoking gun” for how this could have been achieved.

British aviation expert Walter Kennedy, who has spent the most part of 17 years independently assessing the incident, said: “All official inquiries have totally misrepresented what happened. There have been so many lies, misrepresentations and obfuscations. Anyone with an avionics background who looks into this will see that the official account is seriously flawed.
“Do I think the Chinook was sabotaged? Absolutely,” added Kennedy, who for 30 years was a member of the Royal Navigation Institute and spent nine years working as a systems engineer in Britain’s military industry and 25 years on navigation systems in civilian aviation. ………..
An end to the conflict, largely on British terms, would turn out to be a major prize for Britain’s political establishment. But the problem for the British at that crucial time in 1994 was convincing the Irish republican movement to call off its formidable armed struggle. That was because two previous ceasefires brokered in the 1970s had been used by the British as an opportunity to try to defeat the IRA through covert methods, such as infiltration with informers. ……………………………………….
Why were 25 counterinsurgency personnel put on one helicopter?

Other questions also need to be asked. Why were all 25 counterinsurgency personnel put on one helicopter? Who took that decision for this irregular security arrangement, especially when there were other aircraft available to spread the transport of the men? If the CPLS was being deployed, as Kennedy claims, then there should have been a record of this component in the flight plans, which the meticulous navigation pilot, Flt Lt Tapper, would have logged – was this record removed from the pilot’s flight plan after the event?

Intriguingly too, for the Chinook sacrifice to have sent the intended signal to Irish republicans that the “war was over”, there must be senior persons within the IRA ranks who also know the truth of what really happened, and, importantly, would have been tipped off before it happened. This, of course, would have been conveyed to republicans in such a way that would afford plausible denial by the British contacts. Also, given the way the peace process has worked out in hindsight to the historic disadvantage of republicans, much to their bitter regret no doubt, it is unlikely that they would disclose their fatal error of buying into such a dirty trick.

TAP – the other purpose would be to dismantle the nation state. The IRA campaign was funded and supplied throughout by outsiders, people who desire the end of the nation state. Ireland as much the victim as Britain.

4 Responses to “Chinook Crash In Mull Of Kintyre Was Sabotage”