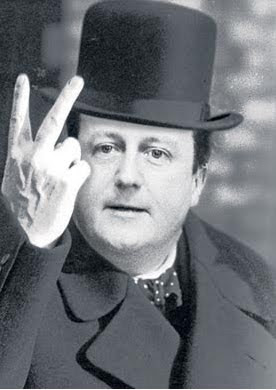 Picture borrowed from eureferendum.blogspot.com. Politicians are placed into power to act on behalf of their backers. Bankers want war and debt, and the collapse of nations, today just as they did throughout history. Money is the most powerful force in human events. That’s why it is brutally attacked and defended.

Cameron’s rebellion against the EU, is all about who’s running – not Britain, but who’s running the City Of London. The weight of British popular opinion is of no significance in this battle of the titans. This is about who controls the world’s money. Money backed Cameron into power. Money demands he signs Britain into various wars. And now money demands he defends financial interests from bureaucratic control from Brussels.

The happy coincidence of a Conservative backbench rebellion forcing his hand over the issues in question, could be seen as part of the same sum. Where financial interests are concerned, that is the point at which the growth of EU power is checked. The bankers are very happy for country after country to be sent to oblivion in an ocean of unpayable debt, and they backed the growth of the EU all the way – until now.

But bankers have used the endless bailouts to get cashed out, and get ready for the buyback. So what do they do? They do what they always do – when they’re ready they stop bailing and pull the plug, so the boat sinks. Everyone else drowns but not themselves. They’re around with full wallets to buy everything for rock bottom prices. They allowed the EU to believe they would be supported all the way politically, and bailed out with yet more trillions to maintain their empire of impossible debt, and impossible economics. Then at the last minute, they pull.

Clegg can’t believe he’s been had. Neither can Sarkozy. As for Merkel, she probably knew the plan from the beginning. As Hitler’s daughter, she knows the pattern. Bankers fund the growth phase, then destroy all at the end. It’s the age old game, which the bankers win, not the politicians, or the people. Cameron, like Churchill, is the bankers’ man, and Merkel, like her father before her, is also their agent. Bankers can only control us all if they destroy our nations. Germany and Britain are as much the victims as any others, as the elites strive to bring forward world government – government by and on behalf of – money.

At the latest EU summit, David Cameron used the veto on Franco-German proposals for an EU treaty change aimed at strengthening surveillance over national budgets of eurozone countries. EU leaders refused to include in the treaty a number of safeguards for the single market and financial services proposed by the UK.

The UK’s demands were not only designed to shield the City from regulation – one major demand would have allowed the UK to impose tougher capital requirements on banks than permitted by the EU’s desire for ‘maximum harmonisation’, for example. As a result of Cameron’s veto, EU leaders opted for an inter-governmental agreement outside the EU treaties, which has already raised legal doubts over whether the countries that decide to sign up to the pact will then be allowed to use the EU institutions to enforce it. (Telegraph, 9 December)

Despite numerous media reports of Cameron being isolated in a 26 versus one scenario, it is far from certain that all other EU member states will join the new pact. In fact, the agreement is creating divisions within parliaments and governments in countries like Denmark, Sweden, Poland, the Czech Republic, Finland and others.

Furthermore, Ireland will make a decision on whether the new euro pact needs to be put to a referendum only when all the details of the deal are finalised, while François Hollande, the Socialist leader who is ahead in the opinion polls for next year’s French presidential elections, said that he would renegotiate the agreement if he were to be elected. (Irish Times Spectator’s Coffee House blog: Mats Persson, 14 December)

5 Responses to “Cameron Bats For Money.”