This article from Global Research reveals how committed Britain is to joining in the coming conflict starting in Syria and moving into Iran.

The author, Mahdi Darius Nazemroaya, writes –
For half a decade Washington has been directing a military arms build-up in the Middle East aimed at Iran and the Resistance Bloc. It has sent massive arms shipments to Saudi Arabia. It has sent deliveries of bunker busters to the U.A.E. and Israel, amongst others, while it has upgraded its own deadly arsenal. U.S. officials have also started to openly discuss murdering Iranian leaders and military officials through covert operations. What the world is facing is a pathway towards possible military escalation that could go far beyond the boundaries of the Middle East and suck in Russia, China, and their allies. The Revolutionary Guard have also made it clear that if conflict is ignited with Iran that Lebanon, Iraq, and the Palestinians would all be drawn in as Iranian allies.

TAP – does Britain really want a war with Iran, Lebanon, Iraq, Palestine, Russia and China? Why? 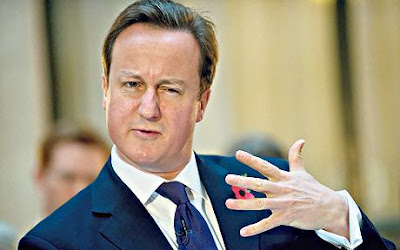 Media trained Jew, supporting a World War to keep the banking families on top. Cameron is a Levita on his mother’s side. They own Standard Bank.

David Cameron does nothing but support the road to war. Why don’t the Conservative rebels get rid of him? You would think the media would be full of discussions about a coming world war which could cause the deaths of millions. All we get is X factor.