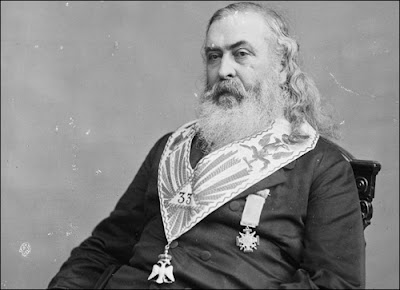 An American General named, Albert Pike, who had been enticed into the, “Illuminati,” by Guiseppe Mazzini, completes his military blueprint for three world wars and various revolutions throughout the world, culminating into moving this great conspiracy into its final stage. These details are as follows:

The First World War is to be fought for the purpose of destroying the Tsar in Russia, as promised by Nathan Mayer Rothschild in 1815. The Tsar is to be replaced with communism which is to be used to attack religions, predominantly Christianity. The differences between the British and German empires are to be used to foment this war.

The Second World War is to be used to foment the controversy between fascism and political Zionism with the oppression of Jews in Germany a lynchpin in bringing hatred against the German people. This is designed to destroy fascism (which the Rothschilds’ created) and increase the power of political Zionism. This war is also designed to increase the power of communism to the level that it equalled that of united Christendom.

The Third World War is to be played out by stirring up hatred of the Muslim world for the purposes of playing the Islamic world and the political Zionists off against one another. Whilst this is going on, the remaining nations would be forced to fight themselves into a state of mental, physical, spiritual and economic exhaustion.
On August 15th of this year, Albert Pike writes a letter (now catalogued in the British Museum) to Guiseppe Mazzini in which he states the following,

“We shall unleash the nihilists and the atheists and we shall provoke a great social cataclysm which in all its horror will show clearly to all nations the effect of absolute atheism; the origins of savagery and of most bloody turmoil.

Then everywhere, the people will be forced to defend themselves against the world minority of the world revolutionaries and will exterminate those destroyers of civilization and the multitudes disillusioned with Christianity whose spirits will be from that moment without direction and leadership and anxious for an ideal, but without knowledge where to send its adoration, will receive the true light through the universal manifestation of the pure doctrine of Lucifer brought finally out into public view.

A manifestation which will result from a general reactionary movement which will follow the destruction of Christianity and Atheism; both conquered and exterminated at the same time.”

Pike, who had been elected as Sovereign Grand Commander of the Scottish Rite of Freemasonry’s Southern Jurisdiction in 1859, was the most powerful Freemason in America. He would retain that post for thirty-two years until his death in 1891. He also published a book on the subject in 1872 entitled, “Morals and Dogma of the Ancient and Accepted Scottish Rite of Freemasonry,” in which he candidly states the following,

“The true name of Satan, the Kabbalists say, is that of Yahweh reversed; for Satan is not a black god, but the negation of God…For the Initiates, this is not a Person, but a Force, created for good, but which may serve for evil. It is the instrument of Liberty and Free Will…

LUCIFER, the Light-bearer! Strange and mysterious name to give to the Spirit of Darkness! Lucifer, the Son of the Morning! Is it he who bears the Light, and with its splendors intolerable blinds feeble, sensual or selfish Souls? Doubt it not!”

Interestingly, in the same book, Pike emphasizes that Freemasonry is a religion based on the occult Jewish philosophy found in the Kabbalah.

TAP It all stacks up one hundred and forty years later. The Tsar created his own money, and he supported Lincoln’s stand against the bankers in the American Civil War.

The progress of history has followed on from there exactly according to Pike’s blueprint. For the full story and how we are endlessly deceivedas to the real history of the world, here is a great explanation.

C & P’d from this website: http://geraldcelentechannel.blogspot.com/2010/07/albert-pike-letter-to-mazzini.html Albert Pike wrote to Giuseppe Mazzini in 1871 regarding a conspiracy involving three world wars that were planned in an attempt to take over the world. The Pike letter to Giuseppe Mazzini was on display in the British Museum Library in London until 1977, This letter has been claimed by many internet sites to reside in the British Library in London , which denies the letter exists.Giuseppe Mazzini was an Italian revolutionary leader of the mid 1800s as well as the Director of the Illuminati. Is this true, that the letter was in in the British Museum? Wonder where it is now..?