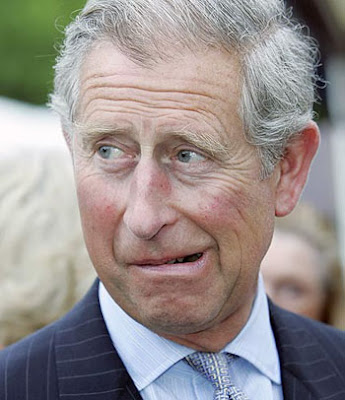 During yesterday evening’s edition of Question Time, BBC1, an audience member asked the panel if it was true that Prince Charles
still retained his right of veto on some of the government’s decisions.

The answer was that indeed he does! Panelist, Peter
Hitchens even went so far as to say, ‘thank God we don’t have a democracy in this country’ Chairman David Dimbleby, asked him to repeat that comment, which Hitchens did.

I expect this clip will be on you tube soon. It isn’t there as yet. However, there are quite a few bits on Google about this veto that
PC has and uses.

I can’t get the links to work.

There is something in the Australian Times about it and also a piece in the
Guardian on 31st October, which is also on infowars or prison planet.

Seems we don’t live in a democracy after all.

Who’d have thought it!

TAP – This is suggestive of the things written about in the book The Sustainable Prince by the late Joan Veon. King Charles The Third runs the Prince’s Business Leaders Forum of the United Nations, which is effectively the cabinet of the coming One World Government. The power of the British Crown extends well beyond the shores of the UK.

The corporations are bigger and more powerful than the nations. They are the totalitarian structure that is in control of the world, and Prince Charles is at their head. There is far more to come out yet as to how the world is ruled. The biggest surprise for Britons is that our Monarchy is at the top table of world government, preserving its own power at our expense.

Democracy is a tired joke. Banks, pharmacy, oil are the big three of the world’s real government structures, working as a single cartel to control the earth. He has a bit more than the power of veto at national level. He controls the real agenda, and can call on the assistance of the world’s security services to tidy up any public difficulties.

That might be why Britain is covered in useless windmills that happen to be located on the Crown Estates, paying exorbitant fees to ‘landowners’. Chris Huhne pretends to be controlling this policy on Charles’ behalf, which, in turn, is why he can walk on water with the Police and the media. Democracy is illusory, theatre laid on to appease the curious, while real power is exercised out of sight by characters who are presented in the media as bumbling outdated incompetent fools.

It is we who are the fools for believing it all.

Gordon Logan says British Royalty is motivated by fear of the power of the Rothschilds, and that the media can sometimes be used to keep them in place by the holders of world financial power. Charles fears for his position, so he manoeuvres behind the scenes to maintain it. Democracy, as you say Gillian, is nowhere in sight.

LONDON: British government ministers have been forced to seek permission from Prince Charles to pass more than a dozen bills, according to an investigation into a secretive constitutional loophole that gives him the right to veto legislation that might affect his private interests.
Since 2005, ministers from six departments have sought the Prince of Wales’s consent to draft bills on everything from road safety to gambling and the Olympics, in a setup constitutional lawyers called a royal ”nuclear deterrent” over public policy.
Unlike royal assent to bills, which is exercised by the Queen as a matter of constitutional law, the prince’s power applies when a new bill might affect his interests, in particular the Duchy of Cornwall, a private £700 million ($1.06 billion) property empire that last year provided him with an income of £18 million.

Neither the government nor Clarence House will reveal what, if any, changes to legislation Charles requested, or why his consent was sought on such a wide range of laws.
Correspondence reveals that one minister wrote to the prince’s office requesting his consent to a new bill about planning reform because it was ”capable of applying to … [the] Prince of Wales’s private interests”.

In the past two parliamentary sessions, Charles has been asked to agree to draft bills on wreck removals and co-operative societies, a freedom-of-information request to the House of Commons has revealed.

Between 2007 and 2009 he was consulted on bills about coroners, economic development and construction, marine and coastal access, housing and regeneration, energy and planning.
MPs and peers have called for the immediate publication of details about the application of the prince’s powers, which have fuelled concern over his alleged meddling in British politics.
”If princes and paupers are to live as equals in a modern Britain, anyone who enjoys exceptional influence or veto should exercise it with complete transparency,” Andrew George, the Liberal Democrat MP for St Ives in Cornwall, said.

”The duchy asserts that it is merely a private estate. Most people will be astonished to learn that it appears to have effective powers of veto over the government.”
The Labour peer Lord Berkeley said: ”We should know why he is being asked and the government should publish the answers.”

Lord Berkeley was recently told to seek Charles’s consent on a marine navigation bill. ”If he is given these powers purely because he owns land in Cornwall it is pretty stupid,” he said. ”What about the other landowners who must also be affected?”
(TAP – Crown Estates own the first twelve miles of sea bed)

Revelations about the prince’s power come amid continued concern that the heir to the throne may be overstepping his constitutional role by lobbying ministers directly and through his charities on pet concerns such as traditional architecture and the environment.

A spokesman for Charles would not comment on whether the prince has ever withheld consent or demanded changes to legislation under the consent system.

”Communications between the prince or his household and the government are confidential under a long-standing convention that protects the heir to the throne’s right to be instructed in the business of government in preparation for his future role as monarch,” the spokesman said.

Daniel Greenberg, a parliamentary lawyer at Berwin Leighton Paisner, said: ”It is something of a nuclear-button option that everybody knows he is not likely to push. But, like the nuclear deterrent, the fact that it is there influences negotiations.”

Graham Smith, the director of Republic, the campaign for an elected head of state, said it was ”an affront to democratic values” that citizens had no right to know whether the prince was insisting on changes to bills.
Guardian News & Media
Read more: http://www.smh.com.au/world/prince-charles-holds-royal-veto-on-legislation-20111031-1ms6d.html#ixzz1ciJ3MUt4

Hi Tap, Interesting that not many videos are around on this issue.
Here are a couple of Links you might find useful.

The role of the unelected Monarchy in British politics has long been questioned. But usually it’s the queen in her role at the top of the law making process that comes under scrutiny.

That’s why many were shocked to find her son Charles, the Prince of Wales, in the middle of such a row.

It’s been uncovered by one national newspaper that since two thousand and five, he’s been consulted at least twelve times on proposed laws on subjects like economic development, housing and energy.

This is because of his role as landlord of parts of South West England, collectively known as the Duchy of Cornwall. The income he receives from this funds his public and charitable work.

Under an ancient legal loophole, he must be consulted if any proposed law could impact on the Duchy, and it’s this consultative role which many are unhappy about.

With the sixtieth anniversary of Queen Elisabeth’s reign only months away, the debate over the relevance of the British monarchy is becoming heated once again.

Previously it’s been argued that the Queen’s legislative role is purely ceremonial and that the Royal Family have no real power.

But the revelation that her son not only has the power to be consulted on laws, but has been consulted numerous times by Members of Parliament, giving him access which no other landowner in the country has to the law making process, now counters that.

MPs are said to be unhappy that their toes are being stepped on by the unelected monarch, with one calling the rule “pretty stupid”

A spokesperson for the prince confirmed that he has been consulted on legislative issues related to the area of land that he owns. As a result this has kick-started the debate over just how much constitutional power the Royal Family in this country should have.
http://interceder.net/topic/prince-charles___

Revelations that Britain’s heir to the throne has used a ‘veto’ power on certain government bills have placed him at the center of yet another controversy amid concerns that the monarchy could be back to a “princes and paupers” culture.

While the British monarchy claims to be a democracy where royals’ power is limited by the law, the new revelations show Charles has overridden the British policy wherever he has seen fit for his purpose.

Ministers from six government departments have been forced to seek his approval to their bills for at least a dozen times since 2005 due to a constitutional requirement that allows the prince to veto all government bills that clash with his interests.

The areas where he has intervened included regulations on road safety, gambling and even the 2012 London Olympics.

Constitutional lawyers said the prince’s ability to veto government bills effectively give him a royal “nuclear deterrent” over public policy.

The nature of amendments to the bills that may have taken place on Charles’ request is not clear and neither the government nor Clarence House would comment on the details of the issue.

However, details obtained based on the freedom of information regulations from the House of Commons show the government has sought the Prince of Wales’s permission on a number of bills related to economic development and construction, housing and regeneration and energy among others.

The disclosures have raised concerns that the claims of formidable royal power in Britain being a formality are mere falsifications to cover up the fact that the royals have absolute power to overrule the will of the whole nation and their representatives despite Britain’s claims to democracy.

Such an issue has major implications for Britons as the Queen should give her consent to each and every policy area the government pursues and can veto every move by the government, at least at a matter of formality.

Following the revelation, members of the houses of the parliaments are urging the government to publish the details of Charles’s interventions in government policies.

“If princes and paupers are to live as equals in a modern Britain, anyone who enjoys exceptional influence or veto should exercise it with complete transparency,” said Andrew George, Liberal Democrat MP for St Ives in Cornwall.

“The duchy [of Cornwall] asserts that it is merely a private estate. Most people will be astonished to learn that it appears to have effective powers of veto over the government,” he added.