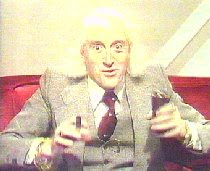 This rather racy styled comment came in anonymously. Could it be true?

how do i get this checked before its too late? B4 he’s buried!!

This must be true because Savile would not do a closed coffin with his vanity.

I have it from high up that Savile has arranged to have his head frozen.

Mind blowingly there are a few high up in the church!!! & masons on the list paidup. ordered & booked b4 they die.

see:- link to article on cryonics

– Savile matches the making a deal with the Devil too perfectly, do your home work.open your eyes.
– Plus i know stuff that ALL THOSE GOOD GIVING FATHERS out there would blow their top with vile savile.
“& theres more folks”

TAP – there’s nothing about Savile in the link. This story is entirely possible, but it needs confirming.