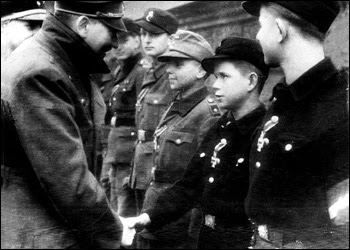 Hitler’s last public appearance, March 20th, 1945. Only trouble is, it wasn’t Hitler. It was Gustav Weber, his unfortunate double, who was later murdered and presented to the Russians as Hitler’s corpse. Hitler escaped unseen down a tunnel from the bunker into the Berlin subway.

I haven’t managed to get Greg Hallett’s ‘Hitler Was A British Agent’ which has to be said, appears to be a heavily suppressed book, given the uncomfortable questions it asks of conventional history. If anyone can get me one, please let me know.

I do, however, have another excellent book, which is going down the same street, written by Simon Dunstan and Gerrard Williams, called Grey Wolf. They don’t assault the traditional explanations of the Hitler years so directly as Hallett, but give many facts which would support Hallett’s theories, such as stating that Hitler was a Rothschild.

The parts of WW2 which are inexplicable, the failure to prevent Dunkirk by allowing the Pansers to close off the beaches, the failure to press on with the Battle Of Britain to victory, the failure to close Gibraltar to the Royal Navy, the holding up of Patten from crossing into Germany in 1944, for example, all suggest someone higher up was pulling the strings for all the public players, Hitler, Churchill, Roosevelt and Stalin. Churchill spoke of a ‘higher cabal controlling events’. Hitler could have defeated Britain twice over in 1940, had his handlers wanted that outcome.

I’ve only read 20% of the book so far. It’s well researched, well written, but stops short of asking the really searching questions, as does Hallett in his banned publication. This book lays the foundation for anyone who wants to examine other explanations as to what happened in WW2, and exposes much suppressed information, which railroads the Trevor Roper whitewash version. An essential read.

My next book will be this if I can get it. Here is Greg Hallett talking –

Hitler in WW1 was captured twice and released by a British Intelligence Officers.

This will take time to absorb, let alone be sure about.

The point you made about Patten is an interesting one, since it was necessary for Russian Troops not to enter Berlin prior to Hitlers & Bormanns Extraction, at the same time the ‘West’ was spiriting away top Nazis, & of cause the stuff from the Peenemunde Rocket Research Base, as well as the top Scientists & Engineers. It was necessary for them to get Hitler out, as he had in his possession all the Swiss Bank Codes, & of cause Bormann was one of the Illuminati & High Ranking Jesuit.

(TAP – also necessary to get them out so they wouldn’t talk. Hitler and Bormann knew who was actually controlling the main events in the war)

It should be remembered that the purpose of WWll was to mop up all the Gold for the Vatican Treasury, this they succeeded in doing, it was mainly in the hands of the Jews.

(TAP. I believe the war’s purpose was the demolition of Germany and the British Empire, leaving the US terror state in control of the world, and its Soviet Communist puppet.)

Stalin held back when Germany invaded Russia to allow the German Einsatzgruppen
Einsatzgruppen, remember, were instrumental in the plan, which was to eliminate the Jews and transfer their wealth to The Vatican.

(TAP. Money is always an explanation, but political objectives are more significant. I remember while visiting Russia how Zhukov had been brought in to fight and win only at the edge of all the primary cities, where locals today still point out the exact spot where the Germans were halted with great pride. The ‘Fascists’ furthest advance line was in the outskirts of what was Stalingrad, but also Moscow and St Petersburg. Until they reached the cities, the Russian army provided little serious resistance. Then they let ’em have it.)

The wealth of the Rothschilds pales into insignificance when compared to that of the Holy C.

‘It matters little who rules so long as
order is maintained.’ Pius xi subscribed to the same principles,
as was proved on July 20 when a concordat
between the
Vatican and Hitler was signed.

The church agreed to
keep priests and religion out of politics while Hitler, among
other things, granted complete freedom to confessional
schools throughout the country, a notable victory for German
Catholics.

His Holiness
welcomed Hitler’s representative,
Franz von Papen, most graciously and remarked how pleased
he was that the German government now had at its head a
man uncompromisingly
opposed to Communism
and Russian
nihilism in all its forms.’

“The Vatican was so appreciative of being recognized as
a full partner that it asked God to bless the Reich. On
a more practical level, it ordered German bishops to
swear allegiance to the National Socialist regime.

As I have said before Both the Power & the Wealth is in the Hands of The Vatican. Any one who has a VISA Card is carrying the number 666 around with them ‘Hidden in Plain Sight’. VI S A. ( Roman / Egyptian / Sanskrit )
Nothing surprises me any more!

TAP Better go for Mastercard. I am fascinated reading much of this stuff, and still tend to the notion of WW2 being a Family Business, with all top players directed and controlled by a higher cabal of related parties. Luckily I don’t teach history, as I’d lose my job. I have a close relative who is a history professor in a British university. Whenever I send him something interesting, he says that he gets so many emails he doesn’t have time to read them all, and never once has replied! He needs his pension, I guess.

Bormann Ran Hitler for the Illuminati
I have mentioned this before,earlier on in the year, to a lot of peoples disbelief, my source then I believe was Hitler The Second Messiah, by a Jewish Author I cant remember, however whilst scanning sites, I came across this stuff in similar vein. What you should never forget about Hitler is that he was a rampant
deviant HOMOSEXUAL, with a predelection for the same treatment as ‘BOOTHBY, who was in the pocket of the Cray’s.viz “Pink Swastica”
By Henry Makow Ph.D.
Link: http://www.henrymakow.
com/002026.html
The second most powerful man in Nazi Germany, Martin Bormann, was a “Soviet” (i.e. Illuminati) agent who ensured the destruction of both Germany and European Jewry.
Thus, he advanced two of the Illuminati’s main goals: integrate Germany into a world government by annihilating its national, cultural and racial pretensions, and establish Israel as the Masonic banker’s world capital by threatening European Jews with extermination. ……………

Martin Bormann (1900-?) was the organizer, treasurer and paymaster of the Nazi Party and controlled its powerful machine. He was the contact with Illuminati bankers and industrialists who financed the Nazi Party and donated millions to Hitler. As Deputy Fuhrer and Hitler’s Secretary, Bormann signed Hitler’s paycheck and managed his accounts. He determined whom and what Hitler saw, and acted in his name. ……..

Goering said “Bormann stayed with Hitler day and night and gradually brought him so much under his will that he ruled Hitler’s whole existence.” (“Martin Bormann” by James McGovern, p.160)

Hitler made Bormann the Executor of his will. Bormann, not Hitler, owned the Berghof. “The entire complex on the Obersalzberg, consisting of 87 buildings and worth over one and a half million marks, was legally registered in Bormann’s name. (McGovern, p.128)……..

The implications are staggering. Remember what Winston Churchill said. “This war is not against Hitler or National Socialism but against the strength of the German people, which is to be smashed once and for all, regardless whether it is in the hands of Hitler or a Jesuit priest.” (Emrys Hughes, Winston Churchill, His Career in War and Peace p. 145)…….

15 Responses to “The Hitler Legend Starts To Unravel”