Max Keiser saw it coming a couple of days ago

Greece is no more. The debts were racheted up until they were unpayable. The political situation was destabilised, and Greece’s democratic decision-making processes sidelined. This is a financial coup d’etat, with the elected government turfed out by bankers. 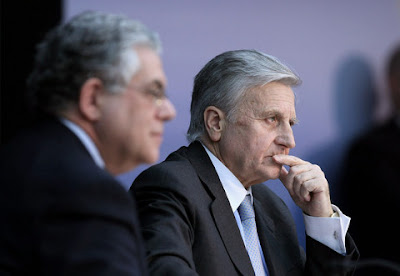 Trichet next to the ECB’s puppet Papademos. The financial crisis is being used to cancel national sovereignty, and impose direct rule by Europe’s bankers.

It was the European Central Bank who orchestrated the Greece debt crises. They sent Goldman Sachs to ruin the Greece government through debt. The debt crisis for Greece was orchestrated by the European Central Banks to force “taxpayers” to pay for the bailouts of bad speculations and government debts stemming largely from tax cuts for the rich and for real estate, shifting the fiscal burden as well as the debt burden onto labor and industry.

Today the European Central Bank has gained complete control of Greece. They have unconstitutionally installed their own to make sure that Greece will be indebted and thereby financial slaves to them for decades to come.