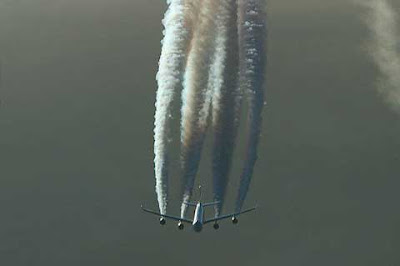 Chemtrails to solve global warming is the cover story. It’s a depopulation device like fluoridation of water, low energy lightbulbs, vaccinations, the full panoply of the UN’s codex alimentarius etc.

These all are building up the toxins in our environment and our bodies to the point where we die quicker, become sterile and ultimately disappear.

Chemtrailing pilots don’t know the real reason they fly. Nor do doctors who tell you to get a flu jab know what’s inside the vaccines they persuade you to have injected into your body. Nor do supermarket managers know why food is irradiated, or farmers know why animals are injected by law with medical interventions they don’t need.

The control point is from much higher up the scale. Yet all the above are told not to talk about what they know, or they will be disciplined and could lose their jobs. Few are willing to risk their livelihoods.

I don’t think many elected politicians have much clue either, apart from Blairs and Camerons who can’t be dumb. They know who’s going to grant them their pay-off for deceiving the people for as long as they did, and are doing. They expect to save themselves and their families from the gradually intensifying poisoning of our species.

One doctor who realised he was living a lie and broke free so he could talk openly about what he was seeing is Dr Stan Monteith of www.radioliberty.com – I would say that all doctors who suspect they are being used as agents of the depopulation agenda should break free. The money they get will be as nothing once people realise what is being done to them.

High levels of immigration are one way to hide the collapsing population. If it wasn’t for immigration, the British original population would be seen to be crashing at the same rate as other countries such as Russia. That’s also a big part of the cover up of what is really happening.

Look at Japan. They have been targeted for a 50% reduction in population according to journalist Princess Nakamura, who was informed by a member of the Illuminati. Fukushima is a deliberately caused catastrophe which will kill millions, and cause endless deformity and sterility.

Britain is also targeted for a 50% reduction in our numbers. The chosen way is not to use bombs and bullets but to deploy undetectable or barely detectable medical, nutritional and environmental interventions, while the people are all taken up with X Factor, Strictly Come Dancing and East Enders, imagining themselves living in a benign political environment. By the time people can start to take in what is really going on, their numbers will be seriously in decline. Even then the media-dumbed down zombies will find it hard to get it.

If you want to survive, first thing to do is turn off the radio and TV, and leave them switched off. Start reading. Start using the internet for your info feed. There are many things you can do to help your chances, but you need your brain to be functioning first. Only then will you be able to start seeing the tip toe towards totalitarianism going on all around. The perpetrators are detectable in the shadows creeping up on you, once you are awake and ready to look.

A top scientist gave a speech to the Texas Academy of Science last month in which he advocated the need to exterminate 90% of the population through the airborne ebola virus. Dr. Eric R. Pianka’s chilling comments, and their enthusiastic reception again underscore the elite’s agenda to enact horrifying measures of population control.

Pianka’s speech was ordered to be kept off the record before it began as cameras were turned away and hundreds of students, scientists and professors sat in attendance.

TAP – I note the idea is to use airborne virus. As with vaccines, getting people used to being injected or sprayed on a regular basis, gets the system in place which can be ‘adapted’ from a harming/poisoning/gradualist regime to a more rapid execution phase. If experience is any guide, that will happen at the tail end of a world war, and with moves towards a world war looking increasingly determined on the part of NATO, the time for defending against mayhem is getting closer.

Elites throughout history have always turned their power to the killing of those categories of humankind that they prefer to eliminate. As both kings and parliaments bow down to money, it is finally the secretive bankers who decide who will die and how many. One survival strategy must be to live in the same village as the Rothschilds in the Home Counties of the UK, or the equivalent in other countries. They aren’t likely to spray their own villages, or poison the common water supply where they live themselves. The smell of rotting corpses isn’t what they want to experience, only a nice sheet of paper reporting that the earth is now emptied of all potential competitors.

Empires of evil can own their own time, but beyond that must come another era. They are after all only human, and frailty will bring them down eventually. What a joy it would be to see that happen! They have been in the ascendant for centuries. We will only turn them around if people wise up, and work out what’s happening all around them. With the internet, the opposition is growing. It needs to explode.

Every animal on the planet must be treated with exogenous growth hormones, and sub-clinical anti-biotics. All nutrients are classified as toxins.

Persistant organic chemicals were banned, but are now relicensed by the C.A.Commission, which is a trade commission.

3 Billion people are projected to die as a result of the C.A. by the U.N. from preventable diseases of malnutrition. It’s time to start digging those vegetable patches and planting those fruit trees.

17 Responses to “Global Warming Provides Cover For Depopulating The Earth”