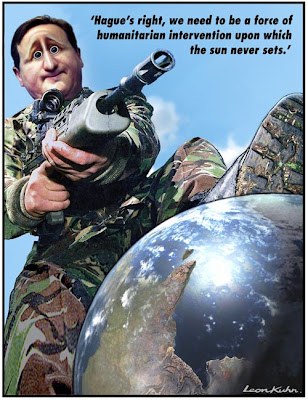 It’s always ‘humanitarian’, ‘democracy’ or ‘evil dictatorship’, yet these are still killing, maiming and dying wars, same as any other kind of war.

As the 11th November approaches, poppies appear on cars, lapels, football shirts, and every television show as if everyone was quite sure they understood what the poppy was for, without mentioning its meaning but once.

There is only one word which the poppy is trying to say. It is a word which never passes the lips of any politician of any party, or any celebrity, a word forgotten and left behind in the mists of long forgotten dreams, when people yearned for mankind to live in a better way.

Today we have given up hoping. War and killing are accepted as the inevitable result of human greed and folly, with no thought that it could ever be stopped. Afghanistan has ground on for eleven long years and will no doubt grind on another eleven. Libya is invaded, as was Iraq. Syria and Iran are said to be next. Who knows? Russia and China must be getting nervous. Soldiers will die. Civilians will die. Millions will be traumatised. There could be nuclear exchanges or attacks on civilian populations using energy weapons like HAARP.

Despite all that, no one finds it possible to use a simple word which denies that this is all really a necessary part of modern human life. Where is the political leadership from David Cameron, saying that people are capable of more than endless killing and maiming? He never says this word, which he should be doing, regularly and with meaning.

The word is ‘peace’.

Poppies used to be a symbol of new hope for peace in the world. Poppies are now an expression of foreboding for what is to come, as if war and loss are now inevitable. That’s why the corporations and the media are pushing them so hard, to ensure people are ready for the sacrifices to be made on the altar of corporate greed, as country after country is bombed to pieces, and the eites rush to close down all competition to their One World Empire.

Cameron, like Blair, will collect his pay-off in due course.

One Response to “Cameron’s Missing Word For November 11th”