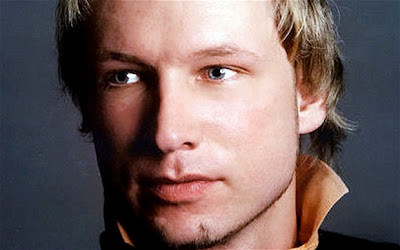 He will disappear into Norway’s state mental institutions, and will not reappear. His mind-programming has served its purpose.

sentenced to prison for the attacks.
“The conclusion is … is that he is insane,” Holden told a news conference. “He lives in his own delusional universe and his thoughts and acts are governed by this universe.”
The two psychiatrists, Synne Serheim and Torgeir Husby, delivered their finding to the Oslo district court on Tuesday morning.
“We have no doubt when it comes to our conclusions,” Husby told reporters as he submitted the report.

“It was a lot of work, demanding,” Husby said, adding: “He has cooperated well.”
Breivik, 32, was suffering from a “psychosis” – a mental state that could alter his judgment leading up to and at the time of the attacks, VG writes

Hi Tap, Anders Breivek, No Ordinary State Sponsored Terrorist.
I commenented 24/07/11, Link:- http://the-tap.blogspot.com/2011/07/britains-police-to-be-militarised.html
on several other occasions that it had appeared to have not been recognised the fact that that the fact Breivik was a 3rd Degree Mason was of no significance, but the fact he was a SMOM was of great significance, as this is the highest Jesuit Order, it is not given to people who just serve baked beans in Mc Donalds. If you try to reduce your myopia by the getting away from the idea that the Jews & Jewish Bankers are the ones in total control you will see the whole picture. The Islamophobia related & sai d to have catalysed the attack, is also thrown in as a ‘Red Herring’, all designed to take your eye off of the ball.

Another nice quote:
“Jews that support multi-culturalism today are as much of a threat to Israel and Zionism as they are to us …. So let us fight together with Israel, with our Zionist brothers, against all anti-Zionists, against all cultural Marxists/multiculturalists.” Link:- http://blog.balder.org/?p=1241 Members of the pro-Zionist groups and parties often paint their non philosemitic fellow nationalists as Nazis, anti-Semites and racists, copying the rhetorics the left wing PC-brigade uses against themselves, and try to present a more polished image towards the mainstream.

They are also much better connected to mainstream politicians than the traditional nationalists, and at times are supported by mainstream newspapers, such as Jyllands-Posten in Denmark, as well as by right wing Jewish groups and individuals.

The mainstream press usually judges these groups more favorably then traditional nationalists, who are invariably accused of being ‘Nazis’.
The equipment he had wouldn’t be out of place in an SAS unit, & the fact that he was said to be an illogical nutter, just doesn’t add up. He was enthusiasic about Israel, a Zionist, Jesuit, & a SMOM do though, but you need to be quite highly placed to be a Knight of Malta, it is probably a higher honour than a Knighthood

This guy was expertly trained, knew exactly what he was doing,and carried out the mission as requested. There is, however, a possability that Mk Ultra might have had some influence in his training, and he was a ‘SLAVE SLEEPER’
but he certainly wasn’t a ‘LOANER’. It was a False Flag Operation geared to make Norway toe the line. The most likely reason for the attack was due to the BDS Boycot
Link:- http://www.veteranstoday.com/2011/07/24/was-the-massacre-in-norway-a-reaction-to-bds-israeli-boycott/

The Jesuit Order is an almost 500-year old covert operations, geo-political, male-only organization, structured as a secret military operation: demanding secret oaths and complete obedience to each direct superior, which is ultimately the Superior General (often nicknamed as the Black Pope, since he dresses in black and ‘stands in the shadow’ of the white Pope).

The “Society of Jesus” – as they are officially known – was originally used by the Vatican to counter the various Reformation movements in Europe, to which the Vatican lost much of its religious and political power. Absolute-temporal-ruling power has always been the Vatican institution’s primary objective.

The Jesuit Order is since 1814 in complete control of the – obscenely wealthy – Vatican institution (and its Catholic clergy hierarchy) and presently also controls various other organizations together with the Military Order of Malta, such as:

So Who is The Puppet Master ?
I sent you a pdf or its Link Eric “Jon Phelps, „Vatican Assassins”

The Jesuits & SMOM mafia network is supported by many of the wealthiest families in Europe and the US (often called the “Black Nobility”) and the high-level masons within certain ‘elite’ secret societies.

“These three financial families, the Rothschild’s, Morgans, and Rockefeller’s all do the bidding of the Jesuit Order because of Jesuit infiltration in their organizations. They do whatever is necessary to destroy constitutional liberty in America and to bring the pope to world domination. As we look back over the 20th century, we see how successful the Jesuits have been.

They have continued to squander the wealth of America and continually attack its great constitution and civil liberties. Daily, the power of the pope in Vatican City increases. One day they will achieve total power again.”

These wealthy families function as financial supporters and proxies for the larger Jesuit & SMOM mafia banking operations.
The Rothschild Dynasty is Jesuit – The Rothschilds are Jesuits

Guardians of the Vatican Treasury. THAT DOES NOT MEAN THEY OWN IT!

If you are not an American you will understand why your country is on its present course, as it too is controlled by the Jesuit General through his select Jesuits, Knights of Malta, Shriner Freemasons, the Knights of Columbus, and the Illuminati’s Masonic, Cabalistic, Labor Zionist, Sabbatian Frankist (named after the Black Pope’s baptized Jacob Frank), Jewish House of Rothschild. For the Order controlled the infamous House of Rothschild since no later than the French Revolution and Napoleonic Wars, after which Jesuit-led Crusade the Rothschild family was surnamed the “Guardians of the Vatican Treasury.”
Eric Jon Phelps, „Vatican Assassins”, 3rd Ed., p.90

The Treaty of Paris of 1763 designated King George III „Arch-Treasurer and Prince Elector of the Holy Roman Empire.” And „according to the Encyclopedia Judaica [sic] the Rothschilds bear the title „Guardians of the Vatican Treasury.” The Vatican Treasury, of course, holds the imperial wealth of Rome. Imperial wealth grows in proportion to its victories in war — as the Jesuit empowerment Regimini militantis ecclesiae implies, the Church-at-War is more necessary than the Church-at-Peace. According to H. Russell Robinson’s illustrated Armour of Imperial Rome, Caesarean soldiers protect themselves in battle with shields painted red. Since the soldiery is the State’s most valuable resource (the Council of Trent admitted this in preferring the Jesuits to all other religious orders), it is easy to understand why the red shield was identified with the very life of the Church. Hence, the appropriateness of the name Rothschild, German for „red shield.” The appointment of Rothschild gave the black papacy absolute financial privacy and secrecy. Who would ever search a family of orthodox Jews for the key to the wealth of the Roman Catholic Church? I believe this appointment explains why the House of Rothschild is famous for helping nations go to war. It is fascinating that, as Meyer Rothschild’s sons grew into the family business, the firm took on the title Meyer Amschel Rothschild und Sohne, which gives us the notariqon MARS. Isn’t Mars the Roman God of War, whose heavenly manifestation is „the red planet”? There is powerful cabalah here, and there’s hardly an acre of inhabitable earth that hasn’t been affected by it in some way.

„International finance and banking are NOT primarily ‘Jewish’. Many of the most powerful banking interests in the world are run by ‘Gentiles’. One of the most powerful forces in international banking is the Knights of Malta, a Roman Catholic military order controlled by the Jesuit Superior General. Sadly, even a certain segment of the ‘alternative media’ helps to propagate the LIE that ‘the Jews’ run international banking. Interestingly, one of the titles of the Rothschild banking dynasty is ‘Guardians of the Vatican Treasury’. ‘The Jews’, as a people, have been used for centuries as a ‘scapegoat’ by these international banksters and their secret societies, such as the Jesuit-controlled Knights of Malta. To label ‘the Jews’ as running banking, Hollywood, etc, is to throw out the proverbial ‘red herring’ designed to throw us off the scent of the ‘real controllers’.”

„The Jesuit General has been the most powerful man in the world since Pius VII restored the Order or “Company” in 1814. Because of the Order’s suppression by the Pope in 1773, the Jesuits began the Bavarian Illuminati with one of their soldiers, Adam Weishaupt. The Illuminati absorbed the Jewish House of Rothschild creating a colossus of wealth around the world, subject to the Jesuit General. With this financial arm in place the Jesuits then made war on the Vatican including the Pope, the Roman Catholic Monarchs of Europe and the Order of the Dominicans. This Inquisition and Crusade was called “the French Revolution and Napoleonic Wars”. For twenty-five years, the Jesuit General’s Masonic agents, particularly in the person of Napoleon Bonaparte, conducted war. Bonaparte also punished the Knights of Malta, driving them from their island home to Russia.”

The Jesuits, now formally suppressed by the Pope, were allied with Frederick the Great of Prussia and Catherine II of Russia. The Jesuit General was in control of Scottish Rite Freemasonry and now sought an alliance with the Masonic Baron of the House of Rothschild. To accomplish this he chose a Jesuit who was a German Gentile (not a Jew) by race and a Freemason by association — Adam Weishaupt.

The Rothschilds were Jesuits who used their Jewish background as a faûze to cover their sinister activities. The Jesuits, working through Rothschild and [financier Nicholas] Biddle, sought to gain control of the banking system of the United States.”

„The Jesuits used Biddle and Rothschild to gain the upper hand in American banking because they knew they could then control the people and effectively re-write the Constitution according to papal law. Jackson was trying to stop them. ”

„We have already seen that the Rothschilds were the banking agents for the papacy’s Church.”

„These three financial families, the Rothschilds, Morgans, and Rockefellers all do the bidding of the Jesuit Order because of Jesuit infiltration in their organizations. They do whatever is necessary to destroy constitutional liberty in America and to bring the pope to world domination. As we look back over the 20th century, we see how successful the Jesuits have been. They have continued to squander the wealth of America and continually attack its great constitution and civil liberties. Daily, the power of the pope in Vatican City increases. One day they will achieve total power again.”

There are many others if you look up above link. which is the Justification for saying Jesuits are way above the Rothschilds., etalia. The official Gold Reserves of the World are a Fiction. The Philipines was used by the Japanese as a Treasure Depositorty, the Gold from which Trillions of Tonnes in addition to precious gems, were to be eventually shipped back to Japan, The USA, under orders from the City Blockaded Japan and the rest is now History. Payback Time was when the Jesuits ordered the ‘A’ Bombs to be used.

P.S.
I have some alternative stuff on Stalin, I will look out.
I have also located more relevent BoE Stuff I will send next month.
I wish you the best of luck in getting your family together again, in
your negotiations with the UKBA.