The U.S. military is on alert for as many as 20 heat-seeking shoulder fired missiles that were brought into the United States from Libya last week. The military is searching for them because they were allegedly acquired by and smuggled into the United States by the CIA. The CIA is planning on using them to down U.S. commercial airlines. The downing of U.S. commercial airlines will be blamed on Iran. 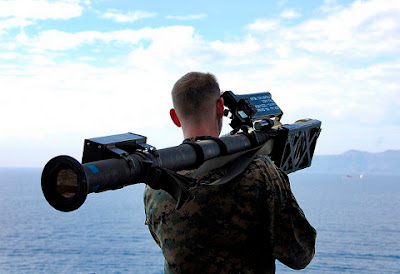 The U.S. military is looking into a report that the missiles may have entered the U.S. on Secretary of State Hillary Clinton’s diplomatic plane. Hillary Clinton made an unscheduled stop in Libya last Tuesday October 18, 2011 and held secret meetings with several officials of the National Transitional Council (NTC).

Earlier this week presscore.ca reported that the U.S. military uncovered a plot by the Federal Reserve bankers to kill Americans involved in the Occupy Wall Street protests in New York City using CIA Libyan mercenaries. The plot involved killing New York City cops in order to start a bloody confrontation between the peaceful protesters and New York City cops. The plot was called off by the Vatican as they would not allow the CIA to kill Catholic cops (the majority of New York City cops are either Irish or Italian, both devout Catholics). The Libyan heat seeking shoulder fired missiles is the CIA’s false flag attack plan B.A defected Libyan soldier explains to a group of CIA mercenaries how to use an anti-aircraft missile (SA-7).

On Sept. 27, 2011 the White House announced it planned to expand a program to secure and destroy Libya’s huge stockpile of dangerous surface-to-air missiles, following an ABC News report that large numbers of them were looted from unguarded military warehouses. ABC reported that an estimated 20,000 Russian-made portable heat-seeking missiles, weighing only 55 pounds each and having a range of two miles have disappeared.

The White House’s real intent was to secure some of them and use them in another false flag attack against the United States people.

On that same day the U.S. State Department (Hillary Clinton) stated that she already had one official (a CIA agent) on the ground in Libya, as well as five contractors (from Xe – formerly known as Blackwater) looking to secure the missing missiles. 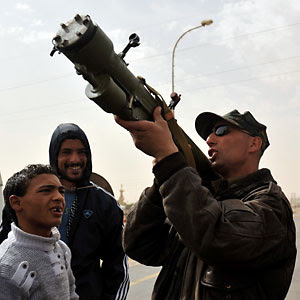 Last Tuesday she flew to Libya to secure the missiles that the CIA and Xe had purchased from the National Transitional Council. An unconfirmed report is claiming she used a U.S. State Department aircraft to smuggle the missiles into the United States. The Secretary of State travels on an aircraft owned by the federal government and operated by the US Air Force. She landed in Libya on a modified Boeing 757. Big enough to transport many 55 lb heat seeking shoulder fired anti-aircraft missiles.

If the Air Force operates her plane wouldn’t they already know where the missiles are? Not if they were brought aboard as a classified cargo.

So if you hear the major news networks reporting that a U.S. commercial airline was downed by a missile and they report that the U.S. government has evidence that Iran was behind the attack, you now know better.

Presscore. Notified in comments anonymously. Thanks.