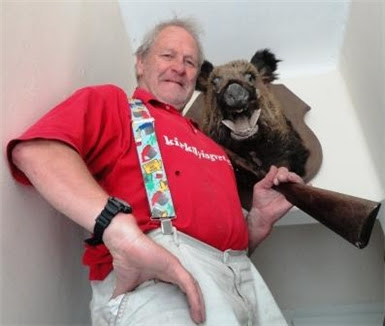 Who is Maurice Kirk? See below.

Where does religion / faith / spirituality / the occult fit in to all we are trying learn about and confront? I believe there may be powerful occult forces influencing, or even directing, from behind the scenes.

It is well known and documented that the ideological, philosophical religious drive behind the Nazis was the occult and, also, that Karl Marx was a devout Satanist.

The Masons worship ‘the grand architect’ – Lucifer. There are plenty of websites detailing quotes confirming this, by people like Albert Pike, Manley P Hall, Alistair Crowley. All three were 33rd degree masons. There is occult symbolism all around us. Just have a look around the City of London, dragons and other ‘beasts’ abound; the ‘guardians’ of the City of London are Gog and Magog, ancient demons.

The European Union building in Strasbourg looks strikingly like
Bruegels Tower of Babel and outside the EU building there is a sculpture that, some have suggested, could be the ‘women riding the beast’ from Revelation.

There are Christian writers and broadcasters who have done some very good research – people like Constance Cumbey, Fritz Springmeier, Dr Stanley Montieth, Bill Cooper (RIP), Russ Dizdar – as well as the strange case of John Todd, which I believe to be authentic.

Often terrifying things have been researched and revealed by Christian writers. Constance Cumbey wrote The Hidden Dangers of the Rainbow (1982) about the growing influence of the occult in modern society. Fritz Springmeier wrote
The Illuminati formula used to create an undetectable total mind controlled slave (1996) about a CIA project called MK ULTRA (where NLP comes from) – the most horrific and deeply disturbing subject I have come across. This book actually contains a ‘pre-warning’ to readers.

These very negative and deeply destructive influences isolate us from each other and make us somewhat ‘less human’ – and therefore far easier to control and manipulate.

Satan is the spirit of chaos, confusion and disorder (these ‘values’, I believe, are visually represented in modern art) All values of society are literally being inverted, just like the Satanic inverted cross. This inversion of values is true of ‘political correctness’, Cultural Marxism. Men must be more like women, women more like men, gay is the new straight, etc. ‘Fair is foul and foul is fair’…

In our very modern, very practical and increasingly atheistic 21st century way of looking at the myriad problems confronting us, we may be overlooking the religious / occult aspects behind all that we are facing.

That, I think, is a grave error. We are all trying to understand and confront very real problems – mercantilist wars, global banking and corporations, GMO‘s, etc. We should also be learning about and confronting the dark ideological, philosophical occult driving forces, which, I believe, could be at the root of many of the problems facing humanity.

TAP – It’s Agenda 21, Scotty. United Nations policy to end Christianity, and merge all religions. No crosses allowed in churches etc. I’ve never been into devil worship myself, but I imagine there are those who find such things absorbing. If those same people happen to be ruling the planet, we are in trouble. That’s for sure.

Suggestion. If everyone turns off the TV and the radion, don’t even own one, they can’t control us. I got rid of mine years ago. It frees your mind. You are not a victim of NLP, hidden messages, military psy-ops techniques. It’s like giving up smoking. The first two weeks is hard but then you feel somuch better living without it all.

UPDATE – As if on cue, the latest on detainment of Maurice Kirk in Cardiff prison.

Dear Signers of the Petition to Free Norman Scarth,

Maurice Kirk is on hunger strike in Cardiff prison “until he is being taken seriously”. He has lost 14 kg and will soon not be able to walk any more.

He has not been given a document that explains WHY he is in prison. He was arrested in Tottenham Police Station on September 21st, as he was helping to expose the kidnapping of six Nigerian children. Details about his assistance as McKenzie Friend in two hearings and other initiatives are on his website.

His own case is the worst of police harassment, while the kidnap is the worst of all child snatching stories. No wonder the ‘system’ wants to keep him locked up and l et him die behind bars.

After he was transferred to HMP Cardiff, he was heard in court only on 13th October. The Prison claimed he refused to attend before. In reality, he had not been told there were any hearings! People who get arrested are supposed to have a hearing within 24 hours!

Whilst in prison, he has had to cope with one refusal after another:

* he is suffering from bleeding ulcers and was bed ridden for two weeks before he was given his prescribed medication
* he was not transferred to the hospital wing because of “orders from above”
* access to his legal papers, computer, cheque books, credit cards that South Wales Police had stolen from his car
* access to law books, paper, pen and stamps
* attendance of his divorce court hearing
* stamps and cash that he was sent did not arrive
* outgoing and incoming mail was delayed
* the number and duration of phone calls were limited
* he was not given a blanket when he was cold.

His fights against harassment by police and for justice in courts have been going for over three decades. He has won close to 90% of all court cases against South Wales Police. But one civil action to claim damages has been going for 20 years and everybody is trying to block it.

With the aid of crooked lawyers, the police managed to get him struck off the Register of Veterinary Surgeons. If he had known that they are protected from prosecution by their Royal Charter, he would not have started any proceedings that have lost him a fortune.

This is therefore an appeal to support Maurice in whatever way you find appropriate:

* write to prisoner no. A7306AT in HMP Cardiff, Knox Road, South Glamorgan CF24 0UG
* contact HMP Governor Richard Booty, T: 02920 923 100, Fax: 02920 923 318. See Norman’s letter as a remarkable model (see also that Norman’s computer was taken when he was re-arrested and see what he writes about the kidnapping)
* write to the Crown Prosecution Service asking for fair hearings, due process and that Maurice’s demands are met. Email: Cardiff.DistrictPCPT@cps.gsi.gov.uk
* just as Haringey Council criminalises the victims of their child snatching and their supporters, so does South Wales Police criminalise and penalise their victim Maurice Kirk – with the collusion of HM Court Services and HMP Cardiff. [Hence the term HM Partnership.]
* sign the petition WANTED: Fair Trials and Compensation.

We tend to care only once things happen to ourselves. But the police state is tightening its strings and bankruptcies, home repossessions, child snatching, sectioning and false imprisonments are on the rise. The Rule of Law has been replaced by the Rule of Money and people seem to have lost their conscience.