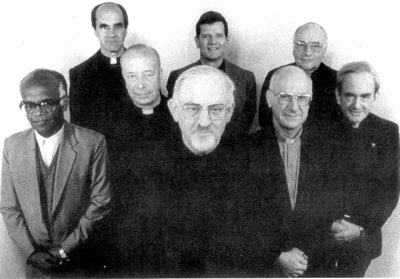 The former Black Pope, head of The Jesuits – Count Hans Kolvenhoof, a Dutchman

This came in from ‘Wasp’. It looks like a good read after ten minutes. I will buy the book of the author, Eric Phelps being interviewed. This is an overlooked part of the One World Government story.

Wasp adds in comments (he writes in capitals as he can’t write lower case!) –

WHEN A NEW POPE WAS ELECTED, COUNT HANS KOLVENBACH, WAS REPLACED BY FATHER ADOLPH NICOLAS, WHO NOW HAS THESE SAME AWSOME POWERS THE COUNT HAD. ACCORDING TO FULFORD, THE COUNT IS PUTTING OUT FEELERS TO THE WHITE HATS FOR IMMUNITY OF PROSECUTION.

Link here. It’s about the power of the Jesuits.

EXTRACT – In Edmond Paris’s book, printed by Ozark Publications, called The Vatican Against Europe, it gets into great detail of what they did. It calls it – the last 30 years of war is all attributable to the Jesuits, their massacres of the Serbs and Jews, etc. But Edmond Paris did not understand that the Jesuit General – and this is one of the most important points I want to make about Von Kolvenbach – the Jesuit General is in complete control of the international intelligence community: that’s the CIA, the FBI, the KGB, the Israeli Mossad, the German BND, the British SIS.

The Jesuit General is in COMPLETE CONTROL of the entire intelligence apparatus – FBI, every bureaucratic agency in this country, all of it; he is in complete control of it.

This youtube clip brings the story to life….Meet The Black Pope…literally.

Martin: Before we begin, let me say a few words. The topic of your book is so comprehensive and covers, literally, all aspects of global control by the Jesuits, dating back to 1540.

I would like to begin our conversation with a very important point of clarification so that our readers have something to hold onto while reading the historical narrative we are about to present. Let me also add that your book is one of the most compelling, dynamic, genuinely educational historical documents I have ever read. I want to tell you, I am impressed!

You, literally, link every major global conflict and political assassination to the hands of the Jesuit Order. The Jews, as with many other groups you mention, have been the unwitting pawns in this Jesuit Agenda.

Today, the present. I’m going to start here, and then we’re going to go way back in time and work our way up. But, I want to start HERE because it will give a foundation for going back in time.

Today, who is the Superior General of the Jesuits, the so-called “Black Pope” [black here refers to hidden, evil activities, not to race or color] who gives the orders to the actual Pope. Is it still Jean-Baptist Janssens?

Phelps: Janssens, Frenchman. No, he passed away in 1964. Then Pedro Arrupe came to power. Then, after Arrupe died, in 1988, I believe, the present Jesuit General is Count Hans Kolvenbach [see photo below.] I call him Count Hans Kolvenhoof.

Martin: Let’s discuss this position of “General” and, in addition, who is this person, Count Hans Kolvenbach? Who does he serve? What are his origins? Where does he hail from?

Phelps: The present General is a Dutchman, his nationality is Dutch.

Martin: The Church of Jesu, is that near the Vatican?

Phelps: It’s not far from the Vatican, right. It’s in the same general area. It’s headquarters of the Knights of Malta.

Martin: Is it part of Vatican City, proper?

Phelps: Right, I believe, yes it is.

Martin: Where does Satan fit into this picture, and what is the ultimate goal of the Jesuits, the so-called Society of Jesus?

Phelps: The Jesuit General, and the other high Jesuit Generals, they are sorcerers. They are Luciferians, and they worship what they would call Lucifer. They do not believe in Satan. They believe in Lucifer.

Martin: I’m fascinated by Count Hans Kolvenbach because nobody in the world knows who this person is. I’ve never heard the name.

Phelps: Let me just tell you that you can see his picture and his top Jesuits – just a second and I’ll get the book. The name of the book is called Jesuits: A Multi-Biography, by Jean Lacoutre, and that is available, usually, in the bookstores. It was published in 1995.

Jean Lacoutre is a Frenchman. He was a communist, is a communist. On the last page of the pictures in it, that is right adjacent to page 343, you see Peter Hans Kolvenbach. He’s the Jesuit General, and he looks like just a very evil individual.

There’s a Black man, who’s a high Jesuit, he’s a 29 Superior Jesuit with his cosmopolitan General staff. One of the General staff looks like Ben Kingsley of Shindler’s List. There are six White men, and one Black man. And that’s his General staff.

Martin: What is the process of choosing a successor General?

Phelps: The High Jesuits elect him, and he’s elected for life – unless he becomes a “heretic”.

10 Responses to “Meet The Black Pope”