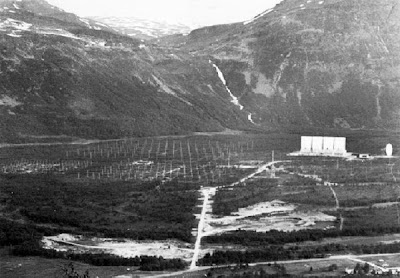 Eiscat HAARP in Norway. By far the most powerful HAARP array in the world.

This came in from Wasp. He’s not a literary genius and cannot write in lower case due to a reading disability, but he is of a scientific bent, and is able to unearth technical insights beyond most of the rest of us. In this piece he points out that Norway’s HAARP, Eiscat, is far more powerful than the one ‘everyone’ knows about in Alaska. Wasp is hard to edit, so I give you his whole email.

The technical-minded will be interested in the details. The majority will be interested that the device which can kill the magnetosphere and allow the sun to fry humanity is located at the top of Europe, ready to be unleashed at the command of its owners, who have prepared underground cities and supplies to ensure their own survival, while billions are left behind on the surface of the earth to fend for themselves.

N.B. IV’E LOOKED AT THAT pdf FROM SOME WEEKS BACK RELATING TO HAARP, AND MADE SOME NOTES ON THAT CHAPS WORK. A LOT OF THE MATHEMATICAL STUFF RELATES TO CALCULATING THE INDIVIDUAL ANGLES OF INDEPENDENT AERIALS TO GIVE THE MAXIMUM EFFICIENCY OF THE GEOMETRY OF THE BEAM.

DEPENDING ON THE ANGLES THESE ARE SET TO YOU WILL GET EITHER DIVERGENCE OR CONVERGENCE. THERE WILL ALSO BE A POINT WHEN IT IS POSSIBLE TO PRODUCE A FOCUSED BEAM. THIS HAS NO GREAT RELEVANCE TO THE DISCUSSIONS ON YOUR SITE. A FURTHER POINT CONCERNING THE POWER SOURCE OF HAARP, THE REASON THE CHOSEN FOR WHAT APPEARS TO BE THE MASTER SYSTEM WAS DUE TO THE FACT THEY HAD VAST QUANTITIES OF NATURAL GAS THEY COULDN’T VIABLY GET RID OF.

THEY KILLED TWO BIRDS WITH ONE STONE.

I LOOKED INTO THIS IN GREAT DETAIL SOME TIME BACK, & MENTIONED IT IN AN EARLIER COMMENT. FROM MEMORY I BELIEVE THEY USE AS A MAXIMUM 3.8 GW BUT ARE ABLE TO FOCUS IT TO GIVE 4.2GW. AS THE POWER SOURCE IS in situ ONLY A RELATIVELY SMALL LENGTH OF CABLING WOULD NEED PROTECTION.

I AM SURE THIS WOULDN’T BE DIFFICULT, EITHER CRYOSCOPICALLY, OR BY SOME OTHER MEANS. THERE IS NO WAY IT WOULD HAVE BEEN POSSIBE TO USE GRID ELECTRICAL SUPPLIES FOR SUCH A POWERFULL MACHINE IN SUCH A BLEAK LOCATION. HAARP, HOWEVER IS ONLY A ‘BABY’ c.f.
HAARP is just the baby of 6 larger installations.

You can look up on google maps

During the period in which many of the books and articles were written, Dr. Eastlund was under a 15 year confidentiality agreement with ARCO (The Atlantic Richfield Company). That confidentiality agreement has now matured. This web site will present information regarding the development of the ARCO patents and the founding of APTI (Now owned by AES Corporation) the corporation managing the HAARP facility. (The ARCO patents referred to in this web site are three patents that Dr. Eastlund assigned to ARCO because he was a consultant. They are 1) U. S. Patent 4,686,605, 4,712,155 and 5,038,664.

The web site is divided into four sections:
The HAARPROOTS section presents historical material from the early period of the development of the inventions.
The ROADMAP is a compendium of most of the ideas developed between 1984 and 1987 with ARCO.
HAARP3600000WATT describes the present status of HAARP related to the ARCO patents.
The HAARPASAT section describes a potentially destabilizing applications of missile defense and as an Anti-Satellite-Weapon. (ASAT).
HAARPWEATHER discusses potential impacts of the HAARP device on weather and weather research.