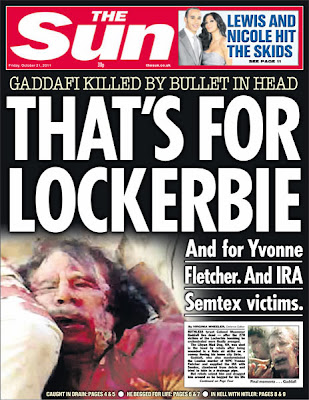 I found an interesting article by Dick Eastman on Gaddafi. The front page of the Sun is yet another example of Murdoch’s lies and (illegal) warmongering.

Visitors to the Tap will know that propaganda is the stock in trade of the British mass media. They know that Gaddafi had nothing to do with Lockerbie, or the killing of Yvonne Fletcher, or the East Berlin disco bombing. These were all NATO/Mossad black ops, as you can find out from the detailed documentaries and books that have appeared, but which are forgotten by the BBC. And when Gaddafi gave money to the IRA, he was paying for protection by shouldering MI6’s expenses. Lord James has already stated publicly that he managed the finances of the IRA for years. In fact, as you will see from the following, Gaddafi was a lot better than Cameron or Blair. He wasn’t a warmonger for a start. Unlike Cameron and Blair, he didn’t send his army and air force on humanitarian missions that caused bloodbaths and destroyed infrastructure. It turns out he wasn’t even a liar, until he accepted the blame for Lockerbie, which he had nothing to do with.

Unlike Cameron and Blair, he wasn’t a coward either. When the mighty NATO war machine hit Libya, Gaddafi didn’t try to escape, he led the fighting from Tripoli, where his three grandchildren were killed, and after that from his home town. After US Secretary of State Hillary Clinton’s public announcement that she wanted Gaddafi ‘dead or alive’, he was of course executed, using the ‘double tap’, a bullet in the torso and another in the head – a standard NATO extra-judicial execution technique. So all the official ‘concerns’ about the execution of Gaddafi are bogus. It doesn’t matter who pulled the trigger, he was executed to avoid embarrassing revelations at his trial in the Hague.

Gaddafi also did a lot for his country – unlike Britain’s useless politicians who for decades have taken their orders from behind the scenes and get us into endless debt, while always finding reasons for not doing what the public wants. I was surprised to see what a good ‘tyrant’ Gaddafi was. As you will see from the following, he would have won a British general election hands down.

The Amazing Things Moammar Gaddafi Did For Libya
By Dick Eastman

2. There is no interest on loans, banks in Libya are state-owned and loans given to all its citizens at 0% interest by law.

3. A home is considered a human right in Libya ­ Gaddafi vowed that his parents would not get a house until everyone in Libya had a home. Gaddafi’s father has died while he, his wife and his mother are still living in a tent.

5. Education and medical treatments are free in Libya. Before Gaddafi only 25% of Libyans were literate. Today the figure is 83%.

6. Should Libyans want to take up farming career, they would receive farming land, a farm house, equipment, seeds and livestock to kick-start their farms ­ all for free.

7. If Libyans cannot find the education or medical facilities they need in Libya, the government funds them to go abroad for it ­ not only free but they get US$2,300/mth accommodation and car allowance.

8. In Libya, if a Libyan buys a car, the government subsidizes 50% of the price.

10. Libya has no external debt and its reserves amount to $150 billion ­ now frozen globally.

11. If a Libyan is unable to get employment after graduation the state pays the average salary of the profession as if he or she is employed until employment is found.

12. A portion of Libyan oil sales is credited directly to the bank accounts of all Libyan citizens.

Which other dictator has done so much good for his people?

All that is of course finished. The Libyans are now facing grinding poverty and the introduction of a Rothschild system of taxation along with cultural engineering levered by Harmanesque programmes provided by brainwashed western ‘experts’. Of course, that will come after the years of costly and bloody ethnic war that are now beginning. That will provide further opportunities to squeeze out Libya’s wealth.

Clearly Gaddafi was setting a very bad example to the international community. He was in the process of pulling the whole of Africa out of the clutches of the bankers.
Gaddafi refused to do the bidding of the Rothschild-centered global banking cartel in 5 areas: