Hattip – www.benjaminfulford.net
(as I don’t pay him a fee, I can’t get a bigger version. Can anyone find the original on Wikipedia?! It’s readable in miniature.) It’s funny how all the bits in green are threatened with invasion by all the bits in black.

Ben Fulford’s reports stir the blood, with his suggestions of bloodcurdling conversations between the Rothschilds/Bushes and members of the White Dragon Society. Threats from the Bushes to reduce San Francisco to rubble, have Iran destroy Israel, are matched with threats from the White Dragons to hunt the Illuminati’s top families and eliminate them down to the last member.

That’s all a bit above my level, I have to say. But Ben Fulford’s global map (from Wikipedia) of cumulated debt and wealth, with money plus in green, and money deficit in black, tells an interesting story, showing how world power has shifted.

As the Rothschilds own 50% of all the wealth in the world, surely they should have another planet marked dark green equivalent in size to the earth, alongside. That would complete the picture. 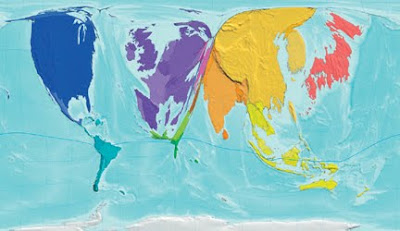 12 Responses to “Map Of World’s Wealth”