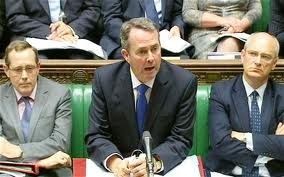 They can’t assassinate all the politicians that threaten their corrupt practices. It would be too obvious. But they can use the media to character assassinate those they want to keep from power.

You think of IDS’ media assassination, Mrs Thatcher’s, the attempts to undermine Gove, the tricks being played on Ed Miliband and numerous other examples. Few are strong enough to withstand the onslaught.

You have to made of steel to survive the real game of power. Fox is seen as a potential threat to Cameron. The backbenchers are stirring. They know that if a challenge comes to Cameron before the election , which is not impossible with UKIP hitting 7% in many vulnerable seats, that Fox is a possible focus for a rebellion.

Better to assassinate him in advance of any threat to the warmongers’ new asset, Daid Cameron. They control the media.

Too bloody right, he doesn’t. Werrity speaks truth, and exposes their corruption. Hence the anti-Fox rage.

Just a few words on Liam Fox. I always quite liked him even though he isn’t exactly the most dynamic of politicians.
In fact he comes across as rather shy, somewhat repressed and a bit tight-lipped, almost as if he had or has something
to hide. But that being said, they are obviously out to get him for all the reasons you stated.

However, I can’t help but think
that he has provided them with plenty of ammunition with his questionably close friendship with his ex-flat mate Werrity.
The fact that he took him to the MOD building and abroad with him so many times is a bit weird and not the right thing for
a government Secretary of State to be seen doing.

Everyone in power has a nightmare scenario of corrupt practices taking place on all sides. It is very hard to find someone you can trust. If Fox trusts Werrity, that is sufficient to make him a good ally in the defence world of vast contracts and huge pay-offs. Most human beings have points of imperfection. There are no saints. Now if Werrity has any record of corruption, hang him high. But endless innuendo with no accusation, evidence provided or fair trial is just too much. No one will want to be in power from a honest viewpoint if we allow the media to assassinate the incorrupt with no reason given, other than suggestion, innuendo and non-stop media coverage. Switch off the TV and radio. Sit down and think.

8 Responses to “Keep Your Chin Up, Liam Fox.”