Parts of New York State were devastated by Hurricane Irene, as it narrowly missed The Big Apple. The victims are left to suffer the consequences with no reporting from the media, their homes and livelihoods devastated into Third World status.

The Hurricane was a freak, as very few make landfall so far north. Irene unusually hit the coast east of Florida and veered north east towards its intended target, guided by HAARP from Puerto Rico, and intensified by huge HAARP rings as radar weather watchers call them (example pictured below in red). 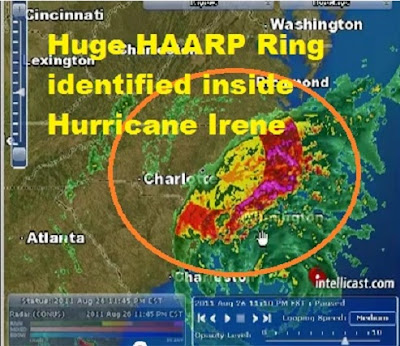 Numerous astute weather watchers and citizen journalists have identified very large HAARP rings inside of or adjacent to Hurricane Irene. I took this still shot from a video in the list below. It seems to originate from a radar facility in Raleigh NC and is large enough to cover the entire eastern region of North Carolina. What are these bizarre colossal HAARP radar flashes and what are they intended to do? Weather watchers want to know.

While protesters fill the streets of New York City,
the rural part of the New York State, which was
devastated by floods, faces Third World shortages
of food, warm clothing, shelter, tools and building
materials.

The Governor of the State, best buddy of the
Wall Street scam machine (he played his role
as head of HUD), did a few helicopter fly bys
and has been missing in action ever since.

How bad is it?