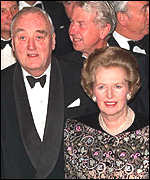 Was Whitelaw implicated in bombing The Grand Hotel?

This is what I’ve written on Gaddafi.

Gaddafi is dead according to the BBC, which tends to lie in its teeth on important political matters. Hillary Clinton turned up in Libya and said she wanted him dead or alive, which of course meant that she wanted him dead. Done. So there will be no embarrassing revelations at the Hague. No need to poison the prisoner as happened with Slobodan Milosevic. No need to put a body double on trial, as happened in the case of Saddam Hussein, whose wife famously protested at Udaid Air Base, “That’s not my husband!”.

According to the Algerians, NATO has resolved the problem at Bani Walid, caused by the NTC’s poor soldiery, by dropping the Poor Man’s Atom Bomb, an FAE daisy cutter, that has killed over a thousand defenders. NATO troops are now moving into Libya to force the errant Libyan tribes into submission and liberate the country’s oppressed oil fields. Libyan tribesmen are particularly troublesome, which is why the Italians killed a million of them before being forced to return home to Italy. In Iraq, NATO never managed to capture the chief of Saddam’s stay-behind army, Izzat Ibrahim Al-Durri. All these years the Americans were pretending to look for Osama bin Laden, when the man they were really looking for was Al-Durri, the Lion, whom nobody had heard of, thanks to the BBC and the Guardian. 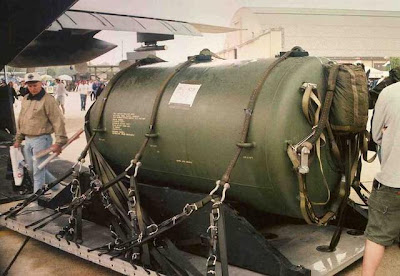 BBC viewers and listeners have already written upwards of 500 comments on Gaddafi’s death, most of them as ignorant as the stuff that the BBC has been feeding them all their lives. The comments on the BBC website are full of references to Lockerbie and the shooting of Yvonne Fletcher, both of which were NATO black ops – like the 9/11 and 7/7 atrocities – committed to keep the Israelis and the Rothschilds happy. Gaddafi had nothing to do with the notorious East Berlin disco bombing either, which was the work of Mossad.

We are now well into the Orwellian age of huge lies, which it is fair to say began in 1984 with the shooting of Policewoman Fletcher and MI6’s farcical attempt to get the IRA to kill Mrs. Thatcher at Brighton. A gaggle of freemasons, led by the paedophile Willie Whitelaw, scurried in their dressing gowns to the Grand Hotel to view Mrs Thatcher’s corpse and were horrified to see the obstinate ‘Iron Lady’ walk out of the rubble covered in brick dust. 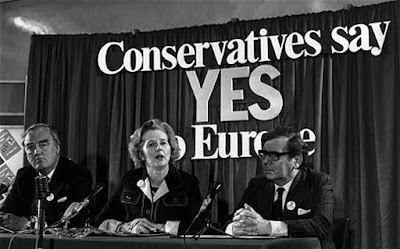 Hattip picture eureferendum. Whitelaw was Thatcher’s closest adviser shepherding her into the EU.

Fittingly in the Orwellian world, MI6’s attempts to kill Gaddafi – later proved by Shayler and a leaked CX document – persuaded the Colonel to see reason and take the blame for the crimes that his very accusers had committed. That is realpolitik. Understand it, because that is the way the world works. That he was financing the IRA at a time when it was being used by MI6 and Whitelaw to kill the British Prime Minister, indicates that Gaddafi was forced into behind the scenes compromises. He also agreed to harbour the notorious international terrorist Abu Nidal, who turned out to be a Mossad agent.

In fact, Gadaffi lived for much of his life under the threat of death. Why? Because he preferred not to listen to the ‘international community’. Are there any British Army officers who would be willing to rescue Britain from the ‘international community’? Of course not. They prefer to serve N M Rothschild, like Lord Guthrie in an office, or with high altitude air strikes to satisfy the bankers’ insatiable demand for oil as collateral for Britain’s national debt. Having said that, I have the names that Gus O’Donnell didn’t mention in his report on the Fox/Werritty business. They’re all Mossad. So the Fox scandal can’t have been initiated by Vauxhall Cross, which is a Mossad safe house. It must have started in the MOD. How far will the brass go? We live and hope.

Gaddafi’s Libya was not a country where the international bankers’ writ was allowed to run. He even wrote a ‘Green Book’, which was a blueprint for life without international bankers. Unlike the British government, Libya had a lot of money – he was no Mobutu – and no external debts. The Libyan banks handed out interest free loans in accordance with sharia law. Libyans were sheltered from the international energy scam and had access to cheap electricity for their ACs and cheap petrol for their cars. Water, formerly rare in Libya, was provided by a remarkable underground river that Gaddafi built from the Sahara aquifers.

Unfortunately, it took an obstinate and courageous dictator to ensure these unusual privileges. A lesser man would, like David Cameron and his predecessors, have got his country into debt, racked up energy prices and sent their soldiers off to the Iraq and Afghanistan butcheries. As it was, Gaddafi was forced to put up with many attempts to kill him by NATO sponsored terrorists like the Libyan Islamic Fighting Group of Abdel ‘Hack ’em’ Belhadj.

After taking delivery of Belhadj from the Americans and torturing him at the behest of the ‘international community’, the tyrant allowed Belhadj and the other terrorists out of prison in 2010, after they had signed undertakings to go home and behave themselves. Instead they went home and took delivery of large consignments of weapons that NATO had smuggled over the Egyptian border and proceeded to mount a putsch in Benghazi under NATO air cover. The Tyrant’s mistake was that he didn’t keep the terrorists in prison or shoot them, which is what they did to him yesterday and will do to the rest of his family, following the example of David Cameron, who killed three of Gaddafi’s grandchildren in April.

While John Pilger points out much of the rest of Africa is about to be invaded.

11 Responses to “Gaddafi. An Alternative View From An Ex-British Spy.”