This looks more like it. Occupy Wall St gets its campaign focused onto ending the Fed. Alex Jones does his thing, and gives the campaign the direction it has lacked so far. Jail threats to the elite gets the biggest cheer. How long til the UK wakes up, and takes on the banksters?

The ‘campaign against debt’ in London needs to focus on who the debts are owed to. This week the Bank Of England issued £75 billion in Quantitative Easing, which will require interest paying for years to come. That money was no doubt issued our of thin air, with interest and capital to be paid to the secretive central bankers, whose names are an official secret, and who are worth hundreds of trillions already. If the government issued the money that’s needed to end the financial crisis, we could get out of the mess we are in, without imposing liability to make endless payments onto our children and grandchildren.

Why do we allow the Rothschilds to own our futures? The future belongs to us. Where’s the British Alex Jones?

Who Owns The Bank Of England?

See ‘Occupy London‘ notified in comment below. The ‘Occupy Wall St’ movement was a great piece of blotting paper for opposition to flow into, until the chant of ‘End The Fed’ took over. That provided the target. 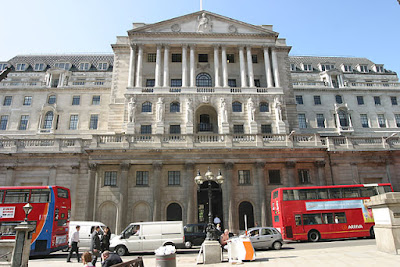 The public face of a privately owned institution, which pretends to be a part of the government, just like The Fed in the USA. We all pay interest to the hidden bankers, who issue money to the economy and charge interest, often issuing it from thin air. Read Who Owns The Bank Of England above. Central Banking is a private business for a small group of trillionaire families, which includes The Royal Family incidentally.

‘End The Fed’ in the USA translates into ‘Ban The Bank Of England’ in Britain, which chants as ‘Ban The Bank’. I would leave the stock market alone, and head straight for Threadneedle Street. That’s the public face of the forces that are wrecking the economy. That’s the institution whose lending hold us all in a vice-like grip. Take away the power to issue money from the Rothschilds. It’s the only way we will ever sort out the mess we are in, and end the tyranny of secret central bank privateering. Ban The Bank! 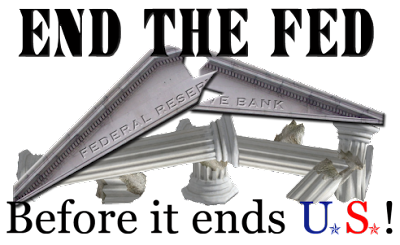 See also where did all Britain’s gold go?

See details of how much gold Britain now holds in our reserves….
hattip Captain Ranty.

“With the gold price hitting new nominal highs I thought it was a good moment to remind ourselves about the consequences of Gordon Brown’s sale of much of the UK ’s gold reserves.

In 1999-2002 he sold 395 metric tons of gold at an average price of $275 an ounce. Today the price stands at $1749 an ounce. No wonder Brown’s sale on the gold price charts is known as The Brown Bottom.. He also gave notice to the market that the sales would take place, thereby giving market participants every opportunity to drive the price down in advance.

Here are my calculations of the value (in millions) which would have accrued if we still held the gold today:

The 2012 Olympics are estimated to cost some £9billion, so we could have paid for the Olympics with the amount of value he surrendered and had over £2billion in change left.

As of December 2010, estimated gold reserves were as follows: –

The impact of the man’s stupidity is breathtaking.
Please circulate. The more who know about these figures the better”

The best way to destroy our nation is to get us all into debt, and crash all our assets. That is the objective. It is not happening by mistake.

TAP – The American experience shows that the ‘Occupy’ movement is easily absorbed into nothingness.

‘End The Fed’ gives teeth and provides a target. That translates into

‘Ban The Bank Of England’

3:43 AM
Me said…
the organisers don’t get it. maybe it is deliberately set up to fail to sabotage the resistance.

They realised and are now refocusing on The Fed, while the main media ignores the thrust in that direction.

The only target of any value is to get rid of the central bankers. With them in place, there will be no progress.