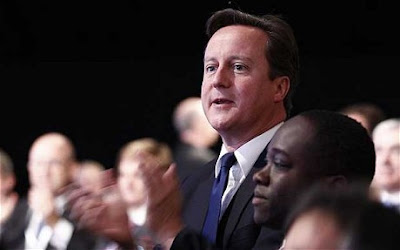 While blacks are being systematically massacred in Libya, here’s a thought for David Cameron’s weak-minded Telegraph-reading zombie supporters in Britain.

Libya did not attack Canada, the United States or any other foreign state. The Libyan civil unrest was a domestic conflict. The Libyan leaders have only killed foreign paid mercenaries. Mercenaries are not protected by the Geneva Convention. Any leader of any country can kill any and all mercenaries who are actively participating in acts of rebellion, revolt, sabotage, or any other act that seeks to overthrown the government.

Legal precedents that apply to Barack Hussein Obama, Nicolas Sarkozy, David Cameron and Stephen Harper for the unprovoked armed attacks against the sovereign state of Libya include;

On July 3, 1933, the first convention that defined aggression was signed in London by representatives of Romania, Estonia, Latvia, Poland, Turkey, USSR, Iran and Afghanistan. It was initiated by Soviet Foreign Minister Maxim Litvinov in response to threats of use of force by the German government following Hitler’s rise to power. The convention defined an act of aggression as follows:

The convention became operative on October 16, 1933. It was registered in League of Nations Treaty Series on March 29, 1934. This convention served as the basis for further discussions on defining aggression.

In 1950, the Nuremberg Tribunal defined Crimes against Peace, in Principle VI, specifically Principle VI(a), submitted to the United Nations General Assembly, as:

(i) Planning, preparation, initiation or waging of a war of aggression or a war in violation of international treaties, agreements or assurances;

(ii) Participation in a common plan or conspiracy for the accomplishment of any of the acts mentioned under (i).
During the International Military Tribunal at Nuremberg, which followed World War II, the chief American prosecutor, Robert H. Jackson, stated “To initiate a war of aggression, therefore, is not only an international crime; it is the supreme international crime differing only from other war crimes in that it contains within itself the accumulated evil of the whole.”
The relevant provisions of the Charter of the United Nations mentioned in the RSICC article 5.2 were framed to include the Nuremberg Principles. The specific principle is Principle VI.a “Crimes against peace”, which was based on the provisions of the London Charter of the International Military Tribunal that was issued in 1945 and formed the basis for the post World War II war crime trials. The Charters provisions based on the Nuremberg Principle VI.a are:

Article 1
The Purposes of the United Nations are:
1. To maintain international peace and security, and to that end: to take effective collective measures for the prevention and removal of threats to the peace, and for the suppression of acts of aggression or other breaches of the peace, and to bring about by peaceful means, and in conformity with the principles of justice and international law, adjustment or settlement of international disputes or situations which might lead to a breach of the peace;
2. To develop friendly relations among nations based on respect for the principle of equal rights and self-determination of peoples, and to take other appropriate measures to strengthen universal peace;

Article 2
The Organization and its Members, in pursuit of the Purposes stated in Article 1, shall act in accordance with the following Principles.

1. The Organization is based on the principle of the sovereign equality of all its Members

2. All Members, in order to ensure to all of them the rights and benefits resulting from membership, shall fulfill in good faith the obligations assumed by them in accordance with the present Charter.

7. Nothing contained in the present Charter shall authorize the United Nations to intervene in matters which are essentially within the domestic jurisdiction of any state or shall require the Members to submit such matters to settlement under the present Charter; but this principle shall not prejudice the application of enforcement measures under Chapter Vll.
The Rome Statute of the International Criminal Court refers to the crime of aggression as one of the “most serious crimes of concern to the international community”, and provides that the crime falls within the jurisdiction of the International Criminal Court (ICC).

“The Parties to this Treaty reaffirm their faith in the purposes and principles of the Charter of the United Nations and their desire to live in peace with all peoples and all governments. They are determined to safeguard the freedom, common heritage and civilisation of their peoples, founded on the principles of democracy, individual liberty and the rule of law. They seek to promote stability and well-being in the North Atlantic area.

They are resolved to unite their efforts for collective defence and for the preservation of peace and security. They therefore agree to this North Atlantic Treaty” :

The Parties will contribute toward the further development of peaceful and friendly international relations by strengthening their free institutions, by bringing about a better understanding of the principles upon which these institutions are founded, and by promoting conditions of stability and well-being. They will seek to eliminate conflict in their international economic policies and will encourage economic collaboration between any or all of them.

In order more effectively to achieve the objectives of this Treaty, the Parties, separately and jointly, by means of continuous and effective self-help and mutual aid, will maintain and develop their individual and collective capacity to resist armed attack.

The Parties will consult together whenever, in the opinion of any of them, the territorial integrity, political independence or security of any of the Parties is threatened.

The Parties agree that an armed attack against one or more of them in Europe or North America shall be considered an attack against them all and consequently they agree that, if such an armed attack occurs, each of them, in exercise of the right of individual or collective self-defence recognised by Article 51 of the Charter of the United Nations, will assist the Party or Parties so attacked by taking forthwith, individually and in concert with the other Parties, such action as it deems necessary, including the use of armed force, to restore and maintain the security of the North Atlantic area.
Any such armed attack and all measures taken as a result thereof shall immediately be reported to the Security Council. Such measures shall be terminated when the Security Council has taken the measures necessary to restore and maintain international peace and security .

This Treaty does not affect, and shall not be interpreted as affecting in any way the rights and obligations under the Charter of the Parties which are members of the United Nations, or the primary responsibility of the Security Council for the maintenance of international peace and security.
US/NATO war against Libya waged without the justification of self-defense
The unprovoked armed attacks have all been made by the United States, France, Britain and Canada. Libya did not launch any armed attacks against the United States, France, Britain, Canada or any NATO member state. Furthermore, the United Nations cannot authorize the use of force and no UN member state can plan, prepare, initiate or wage war against any state especially when the conflict is a domestic conflict.

The UN Resolution 1973 (2011) is therefore illegal – UN Charter Article 2. 7. Nothing contained in the present Charter shall authorize the United Nations to intervene in matters which are essentially within the domestic jurisdiction of any state.

After WWII German officers and official were indicted for exactly the same crimes that are now being committed by Barack Hussein Obama, Nicolas Sarkozy, David Cameron and Stephen Harper.

Participation in a common plan or conspiracy for the accomplishment of a crime against peace
Planning, initiating and waging wars of aggression and other crimes against peace
War crimes

One Response to “David Cameron Declared A War Criminal”