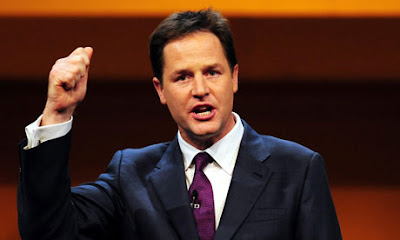 Lib Dems on 8%. UKIP on 7%. How long until they change places?
Keep your arm down please.

Impudent Clegg can’t sort his own party out, but still finds the time to excoriate Conservative backbenchers in The Guardian.

He’s doing what he’s paid for. Moved into place by the media and those who control both them and political parties, the ‘system’ can’t work out how to handle the current situation. The Lib Dems were built to hold the balance of power with 20% plus in the middle of British politics, not disappear down the plughole to 5%, and allow UKIP to surge past to 10%.

Clegg’s an angry man. It was never meant to be like this. The problem is that even the dumbed down British electorate can smell a rat, now the electoral deodorant’s worn off. In Clegg’s take on the world, the EU, that he was put in place to represent, is big and powerful, the bankers too. Mere MPs will be told what they have to do, especially Conservative backbench scum. As for voters, they are so far down the scale, they should be fed on a diet of fluoride, dioxin, GM foods and vaccines laced with sterility, until they quietly go away or die.

Conservative backbenchers are going to be dropping out like flies at election time unless they remove Cameron and Hague as a matter of urgency, and replace them with Redwood, May or Paterson. Clegg will have few options when he finds that no one wants to vote for him. Postal vote fraud and ballot box tampering will no doubt save his seat, but his party will be largely absent from the next Parliament. Only electoral fraud is going to keep his pretty face crawling all over our television sets, while he assaults the only people trying to do the peoples’ bidding and get rid of the EU. Next time it might be 200 Conservatives MPs, mindful of their own survival choices, who bid for a referendum, with Cameron gone. Clegg will be screaming blue murder all over the shop. By then not a soul will be listening.

Philip Davies, Tory MP for Shipley, described Clegg as “a little European”, adding: “If Nick Clegg wants to wed his party to the European project, that is fine: he has already presided over the bombing of his party in the opinion polls. That is a matter for him, but I will be damned if he is going to drag us down with him. His party makes up one-sixth of the coalition, we don’t have any need for the tail to be wagging the dog.”

Nick de Bois, the Tory MP for Enfield North, said: “I hope we have learned at least one thing from last week, that there is a growing need for and acceptance of the case for repatriation of powers from Europe. This does not have to be a headlong charge, but there is no doubt in my mind that it must happen.”

Until the Conservatives talk of withdrawal they won’t fix their UKIP problem. Until they get rid of Cameron and Hague, they won’t be able to even talk of it.

Peter Hitchens has another QUITE GOOD idea. The 81 should quit the Conservative Party and form a new PaRLIAMENTARY FORCE.

One Response to “Clegg’s Electoral Deodorant Has Worn Off”