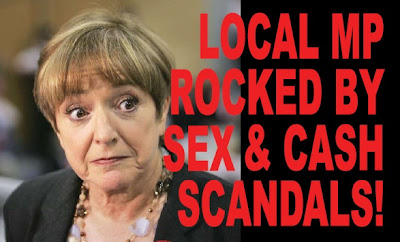 Margaret Hodge was made Children’s Minister by Blair, despite her failure to prevent abuse of children in Islington. She created the National Children’s Database, known as the Meat Rack, as it is used by paedophiles to select their targets.

Hodge/Oppenheimer is an absolutely typical example of the kind of people who have destroyed Britain. Jewish of course. Third class honours. Started her career covering up paedophiles in Islington.

As soon as she got into Parliament, she nominated Tony Blair for leader after the poisoning of John Smith. In spite of or rather because of her attitude to paedophilia, she was made Britain’s first children’s minister. This followed Blair’s Operation Ore cover-up which implicated dozens of politicians. Thanks to the cover up, the only political figure who got charged was Philip Lyon, who worked with Blair on PM’s question time in the Commons.

I’ve been reading up on children’s homes in the last few days. It’s horrifying stuff and it goes all the way to the top. Remember Dunblane? These people are on the move and they make Berlusconi look like the Virgin Mary. In America, it’s all hanging out. Worse than Britain. 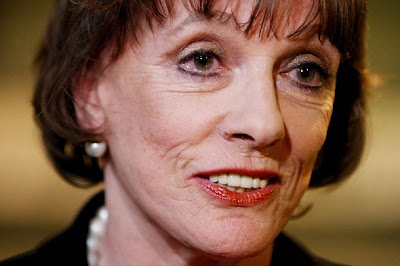 Esther Rantzen, abuse victim, tried to help with Childline. But the powerful have never been stopped. Life is easier and safer for paedophiles today thanks to the complicity of people like Tony Blair.

Here are a few extracts from wikipedia:

Margaret Eve Oppenheimer was born in Egypt in 1944 to Hans and Lisbeth Oppenheimer, a refugee multi-millionaire German Jewish steel trader and his Austrian Jewish wife. The family’s company Stemcor is the world’s largest privately owned steel-trading corporation, with an annual turnover of £6.28 billion in 2008.

The end of her period at Islington, before taking up her Parliamentary career, was marred by criticism of her response (in 1985) to serious child abuse allegations.

In 1985, Demetrious Panton complained about abuse that he had suffered while in the council’s care in the 1970s and 1980s. He did not receive an official reply until 1989, in which the council denied responsibility.

In 1990 Liz Davies, a senior social worker employed by the borough and her manager David Cofie, raised concerns about sexual abuse of children in Islington Council Care. Correspondence between Hodge and the Director of Social Work indicates that she declined a request for extra resources to investigate.

In early 1992, Davies resigned from her post and requested that Scotland Yard investigate the allegations. The Evening Standard then began reporting on the allegations of abuse in Islingtons children’s homes, shortly after which Hodge resigned to pursue a career with Price Waterhouse.

In 1995, the White Report into sexual abuse in Islington Care homes reported that the council had failed adequately to investigate the allegations. In 2003, following Hodge’s appointment as Minister for Children, Demetrious Panton went public with his allegation that he was abused in Islington Council care and had repeatedly raised this issue with no effect. He accused Hodge of being ultimately responsible for the abuse that he suffered.

Davies also went public with the issues that she had raised concerns about while working for the council. Following a media campaign conducted by several national newspapers calling for her to resign from her new post, she responded to Panton by letter, in which she referred to him as ‘extremely disturbed’. Panton then passed the letter to the press which planned to publish it, only to be judicially restrained from doing so at the instruction of Hodge. The letter was eventually published, mainly on the grounds that the blocking of the letter was seen as disproportionate. Hodge was forced to publicly apologise and offered to contribute to a charity of the man’s choosing as recompense.

In 1994, as a new MP, she co-nominated the candidature of Tony Blair, a former neighbour, to be the new leader of the Labour Party after the sudden death [poisoning GL] of John Smith.

In 2003, she was made Children’s Minister. She was appointed to the Privy Council on 22 June 2003. Hodge was the first person to be Children’s Minister when the post was created in 2003 but suffered difficulties after the Islington controversy; her resignation was called for on several occasions by the press and parliamentary opposition.

She was later transferred to less visible posts. Usually viewed as a strong supporter of Tony Blair, she appeared to have retained his support despite the hostility of the press.

Privacy International awarded Margaret Hodge the 2004 Big Brother Award for “Worst Public Servant” for her backing of controversial initiatives including the Universal Child Database. At a keynote speech to the Institute for Public Policy Research on 26 November 2004, Hodge strongly defended the idea of greater state regulation of individuals’ choices, stating that “some may call it the nanny state but I call it a force for good”.

In the same year Fathers 4 Justice campaigner Jonathan Stanesby handcuffed Hodge, stating he was arresting her for child abuse. Fathers 4 Justice targeted Hodge because she was the “bogeywoman of family law, who doesn’t even believe in equal parenting”.

TAP Thanks, Gordon. I get the picture now. It’s not always the fathers who lose out – especially if they are paedophiles. See the Vicky Haigh case. Her husband David Tune has been accused of paedophile actions on two occasions. The mother has no criminal record. Yet the judge and the social workers gave the daughter to the father, and blocked access to the mother.

It is highly significant that the two public promoters of paedophilia in the Labour Party are both Jewish. The pair of them single-handedly revolutionized British culture and have written these changes into the British legal system.

A Jewish lecturer at Aberdeen University has written about the role of Jews in promoting sexual corruption. He has admitted it quite openly. The paralysis that the British public feel when talking about Jews is a result of hard-wired mass media brainwashing – a very modern and effective British (and Jewish) science. Lippman, Bernays, Lewin, Gottleib.

The British are a heavily brainwashed nation, mainly by TV. No amount of evidence will be enough to eliminate a mental block imposed by good brainwashing. The Special Branch will brainwash you personally if necessary. You won’t even know it’s happened but it will be detectable by acquired knee-jerk reactions, like having a fit if you read something bad about Jews.

I got interested in Jews because of 9/11. It was the most instructive experience of my life, because I happened to be surrounded by Jewish and non-Jewish agents, and was able to discuss politics with them. Realpolitik is Jewish. If you haven’t understood Jews, you can’t understand politics.

As for gypsies, I ran into a few in Bulgaria. Very pushy if you give them half a chance. You need to be ready to defend yourself with your fists. A bit like Glasgow on a Saturday night.

TAP What did the Jewish agents you knew say about 911, Gordon?