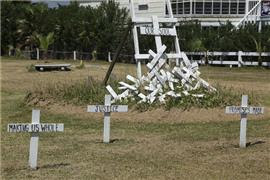 PHOTO: Residents of Grand Isle, Louisiana, display their signs of protest [Erika Blumenfeld/Al Jazeera] – “The government has not even acknowledged any health impact [from the disaster].”

“If you got caught humping another woman – [if] you’re both naked and caught in the act – you’d want BP to explain to your wife how it didn’t happen.”

This colorful analogy was proposed by Dean Blanchard, a seafood distributor on Grand Isle, Louisiana, to explain oil giant BP’s continuing machinations to evade liability in the aftermath of the April 2010 disaster.

During a recent discussion in his office, Blanchard told Al Jazeera that the fishing waters off Louisiana are only producing one per cent of the shrimp they formerly produced. “Half of the local fishermen have shut down,” he stated. “They are dying. And [as] for the fishing, every day they are hauling dead porpoises in front of my place. I have a claim filed with BP, but none of us in the seafood business are being paid.”

Speculating that he may soon have to close down his company, Blanchard spoke for hundreds of thousands of Gulf Coast residents who remain angry and frustrated when he added: “I worked 30 years to establish my business, and now BP has destroyed my life.”

In a key investigative report released on September 14, the US government heaped most of the blame for the oil disaster on BP, which now faces a raft of criminal and civil litigation and billions of dollars in potential damages.

The report concluded that BP violated federal regulations, ignored safety concerns and crucial warnings, and made careless decisions during the cementing of the well nearly two kilometres underwater.

“That report summarised what we already knew, and it will help establish the punitive damage case against the defendant [BP],” New Orleans-based attorney Stuart Smith, representing more than 1,000 cases against BP, told Al Jazeera.

Smith has been litigating against oil companies for 25 years, and in 2001 was lead counsel in a case that resulted in a $1bn verdict against ExxonMobil.

“The fastest way to lose a toxic tort case is to rely on the government or the defendant to collect the evidence,” explained Smith, whose firm has spent more than $2m for its client’s cases by collecting samples and data and having them analysed by experts.

As litigation against BP continues to mount, several studies have confirmed Smith and Blanchard’s concerns about the deep impact of BP’s oil disaster.

One recent study carried out by experts at Auburn University concluded that mats of oil that remain submerged on the seabed could pose a long-term risk to coastal ecosystems. Large quantities of tar balls and oil mats have washed ashore, or have been uncovered by recent storms, at Gulf Shores and Orange Beach, Alabama, as well as at several beaches in Louisiana and in Pensacola, Florida. A recent Al Jazeera over-flight of the area near BP’s capped Macondo well, the origin of the April 2010 disaster, revealed a long swathe of oil and sheen.

Dr Wilma Subra, a chemist and MacArthur Fellow, has – since autumn of 2010 – been conducting tests on seafood and sediment samples along the Gulf for chemicals present in BP’s crude oil and toxic dispersants.

“Tests have shown significant levels of oil pollution in oysters and crabs along the Louisiana coastline,” Subra told Al Jazeera. “We have also found high levels of hydrocarbons in the soil and vegetation.”

In response to the question of what local, state and federal governments are doing about the ongoing chemical exposures, Subra declared: “There is a lack of concern by the government agencies and the [oil] industry. There is a leaning towards wanting to say it is all fixed and let’s move on, when it is not.”

Blanchard, who perceives the federal government’s inadequate response to the BP disaster as evidence of its collusion with the oil giant, meanwhile joked: “We’re fixing to have a fundraiser to try to buy our politicians back from BP.”

On June 1, 2010, BP board chairman Henric Svanberg announced, in accordance with the company’s pledge to provide $20bn in compensation to persons harmed by the disaster: “I hear comments sometimes that large oil companies are greedy companies or don’t care, but that is not the case in BP. We care about the small people.”

According to attorney Stuart Smith, however, neither oil companies nor the US government properly tends to citizens who suffer as a result of their policies.

“I’ve spent 25 years suing the oil and gas industry, and the government has never been on the side of the people,” Smith informed Al Jazeera. “But the extent to which they’ve behaved that way this time is unbelievable. The government has not even acknowledged any health impact [from the disaster].”

Over the course of his career, Smith has represented a number of chemical plant employees with a condition known as toxic encephalopathy, a degenerative neurological disorder that can result in permanent brain damage. Caused by exposure to toxic substances, symptoms of the condition include memory loss, concentration difficulties, fatigue, seizures, depression, light-headedness, headaches and nausea. Similar symptoms are now being experienced by residents of the Gulf Coast.

Indeed, since July 2010, Al Jazeera has spoken with scores of Gulf residents, fishermen, and clean-up workers who have blamed negative health effects on the chemicals from BP’s oil and dispersants.

“The government knew about … peer-reviewed studies of what happens when people are exposed to these chemicals, and millions have been exposed,” Smith stated. “Peer-reviewed scientific literature shows that you’ll have these health problems, and yet the government does nothing.”

Al Jazeera recently spoke with Steven Aguinaga, a 33-year-old father of three who confirmed that he acquired “critically high levels of chemicals” in his body after swimming with his friend Merrick Vallian at Fort Walton Beach, Florida, in July 2010.

“At the time I had no knowledge of what dispersants were, but within a few hours, we were drained of energy and not feeling good,” said Aguinaga. “I’ve been extremely sick ever since.”

Al Jazeera has covered this subject extensively, and, given that BP has just confirmed filing a plan with US regulators to pursue its first deepwater oil work in the Gulf of Mexico since the April 2010 disaster, concerns of future problems persist. According to BP’s application, the company wants to drill four new wells at a depth of 1770 metres (244 metres deeper than the Macondo well) in an area approximately 300km off the Louisiana coast.