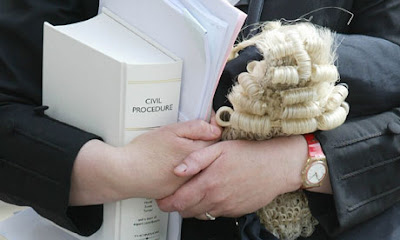 There’s nothing civil about the cocaine-sniffing legal profession.

Of all the 333 gagging orders in Britain only 69 apply to celebrities. 264 apply to the seizure of children by the State.

The court in the Vicky Haigh case has asked her assistant Elizabeth Watson to remove certain things from the internet. I possibly copied and pasted some of her communications onto The Tap a few months ago, and the judge in London is asking for any relevant passages to be removed.

Sure, I replied. I will remove anything they ask if exactly specified. As far as I can see, the text is compliant.

(Some helpful person (I presume it’s a person) has gone in and padded the html until it is almost impossible to find anything and do an edit.

Does any one know how to get rid of the padding?

Or where it comes from.)

Incidentally of all the 333 gagging orders in Britain only 69 apply to celebrities. 264 apply to the seizure of children by the State.

My reply to Vicky Haigh re Liz Watson

If she wants anything removed, please ask her for any exact text she wants removing.
Otherwise I will assume her general request doesn’t apply to The Tap, and that my posts are compliant. They appear to be compliant as far as I can see.

Here’s the link to the original blogpost which covers Christopher Booker’s story on this case which was publicised in the House Of Commons by John Hemmings MP, which effectively removed the gag..

Steve
Sep 05, 2011 @ 22:05:37
In another comment elsewhere it was stated that there are two sides to each story.
However; there are “Three parties” involved in all the “evil and duplicitous secrecy” of Family Court proceedings.

Fact is, it is the third party of the wig-wearers who are on trial – and not before time. That such a lack of transparency continues in this day and age – “it’s as transparent as mud M’lud” – is the real crime against humanity. It continues because the judiciary just don’t get it.

Their days of turning the truth upside down and inside out a la Joseph Stalin & Co – to protect their busted probity are over. As for the neutered press, media and Poorliamentarians – just look at them ‘across the board’ and at their sloven and spinless sucking up to the likes of Murdoch. Who’s been kidding who M’luds are you all not supping with the devil – or entrapped / blackmailed by him and his cohorts?

REPLY
JM
Sep 06, 2011 @ 00:20:48
you can’t rely on journalists to fight the war….what use would they be, ‘cept for cannon fooder? AND THEY ALL WORK FOR THE OTHER SIDE! THEY WOULDN’T ALLOWED TO BE JOURNALISTS IF THEY DIDN’T! World full of poxy morons you know….

I am not going to comment specifically on the Watson case.

I have always had and remain to have three concerns about the issues relating to Vicky Haigh. The first two were public.

Firstly, I was concerned that there was an attempt made to jail her for talking at a meeting in parliament. The meeting was one at which Anthony Douglas was answering questions and I was chairing. She asked a question of Anthony Douglas. When she asked this question she did not name herself, her daughter or her ex-husband. However, this was used by Doncaster as a reason why she should be imprisoned. She did name Doncaster.

I have some great difficulty with this from a constitutional perspective. The First Amendment to the US Constitution is specific about people’s right to petition government. In the US that has been considered to involve all three estates of the constitution. In asking a question at the meeting I chaired Ms Haigh was petitioning the legislature and the government (Anthony Douglas is the Chief executive of a government agency).

This right is actually in the UK constitution in Article V of the English Bill of Rights. It refers to the Monarch, but in essence the Monarch is the whole of the state.

“That it is the right of the subjects to petition the king, and all commitments and prosecutions for such petitioning are illegal;”

Back in the late 1600s and early 1700s parliament used to act to protect people against whom action was taken or threatened for petitioning parliament – even if a formal petition had not been written. I think it should do so again.

Secondly, the authorities were threatening to take Vicky’s baby at birth. I do not think that was a reasonable threat to make.

Thirdly, Vicky should have a right to appeal the original fact finding decision. Wall P (the judge dealing with these two hearings) makes an issue of the fact that she has not yet made an application for permission to appeal the decisions.

One thing Justice for Families does is to help people do is to make appeals (which starts with an application for permission to appeal).

It was the case that Vicky’s lawyers told her she could not appeal. It is still the case that she is being prevented from appealing – simply because her lawyers are refusing to give her her case file – claiming that they need to keep the file so that the LSC will pay them.

Hence there is nothing that can be read into the fact that no application for permission to appeal has been made yet.

If I refused to see my daughter why did they arrest me for sending her Christmas presents, arrest me for bumping into her in a petrol station and place non contact orders, non molestation orders and gagging orders on me.
No, what I refused to do was be the States slave.
What do you think to Wall?

Sent from my iPhone

Wall sounds like he daren’t take on the powers that be, and wouldn’t dare even think of doing so. He knows the details of laws better than their implication, and obviously doesn’t care too much how things look to the public looking in on their private world of state child removal, with paedophiles favoured over the rights of children. He wants things nice and secret as they always have been in the past, and doesn’t want Parliament shedding any light in this dark and murky corner of the legal profession.

Hemmings must keep going in challenging the authenticity of a system that is so blatantly unjust, gagging hundreds of cases every year, while paedophiles party, enjoying effective totalitarian power over families to acquire the children they desire.