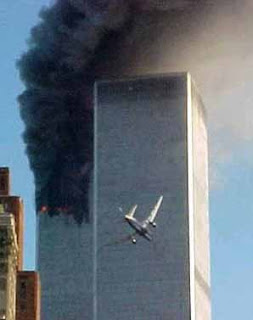 Look carefully at the plane’s underbelly. What’s that lump doing sticking out of the bottom? See the video at the end for the explanation. It will surprise you.

I was sent this web address by a reader, and if anyone ever doubted whether 911 was a fabricated false flag event, with the events that happened being very different to the ones we were told at the time, this should help them make up their minds.

You can watch a long video needing an hour or so and see it all explained if you want, or spend just two minutes viewing these visual explanations of why the imagery of the towers being hit by planes are the work of computer graphics.

(The only problem might be that these films are themselves a deception, put out to confuse.  Yet who would do that and why?  With even MSM now starting to admit that 911 should be approached ‘with an open mind’ (Fox News), I am taking these films as genuine for the time being.)

There are a lot more details in the video, but this is enough for most people to see.  Things like how could the cockpit of the plane hitting the South Tower reappear intact and in line of flight, after passing through a steel building?  The networks realised this error and removed the clip from their archive and blanked the picture on 911 itself by covering it over with a banner, but many Americans had already videoed the error.

In some copies of the event, the smoke is white.  In others it is black.  Similar views of the towers have different backgrounds.  The number of inconsistencies concerning the images are so great, there is no point me listing them all out here.

Take your time with this.  It is an emotional journey to go through, which is fascinating and depressing all at the same time.  This was an act of war, in which many people died.  That in itself makes this hard to watch, but you owe it to yourself not be taken as a fool by the media.  Form your own conclusions, but at least look at the evidence.  And as I say, take your time.


I didn’t know that Fox News has released information demonstrating 9/11 to be a scam.  One third of Americans now believe it to be so, which is another reason why The Tea Party is gaining ground.

TAP – The pulling of WTC 7, without any impact from any plane, missile or device, is the starting point for many sceptics. Once Flight 93 was shot down by a pilot disobeying orders, there was no cover story for how there was a plane available to crash into the building. WTC 7 was intended to be hit by a ‘plane’ like the Twin Towers, making it three impacts in New York City.

So what killed the missing air hostesses?

In this new and expanded edition of Michel Chossudovsky’s 2002 best seller, the author blows away the smokescreen put up by the mainstream media, that 9/11 was an attack on America by “Islamic terrorists”.  Through meticulous research, the author uncovers a military-intelligence ploy behind the September 11 attacks, and the cover-up and complicity of key members of the Bush Administration.
The expanded edition, which includes twelve new chapters focuses on the use of 9/11 as a pretext for the invasion and illegal occupation of Iraq, the militarisation of justice and law enforcement and the repeal of democracy.
According to Chossudovsky, the  “war on terrorism” is a complete fabrication based on the illusion that one man, Osama bin Laden, outwitted the $40 billion-a-year American intelligence apparatus. The “war on terrorism” is a war of conquest. Globalisation is the final march to the “New World Order”, dominated by Wall Street and the U.S. military-industrial complex.
September 11, 2001 provides a justification for waging a war without borders. Washington’s agenda consists in extending the frontiers of the American Empire to facilitate complete U.S. corporate control, while installing within America the institutions of the Homeland Security State.

Pentagon was hit by a missile, not a plane.

Here is a long explanation on how the missing passengers on 911 were liquidated.

TAP – the explosion looks much smaller in this clip (which was no doubt abandoned) than on the fully worked up versions.

UPDATE – In this video, the North Tower shows a flash before the plane ‘impacts’ the building. The slo-mo also enables you to wonder how the airoplane’s wings flew intact through the steel shell of the WTC, with nothing breaking off.