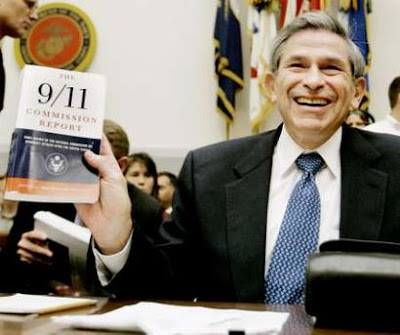 Wolf laughing over a good job well done….all evidence that showed 911 to be an inside job, carefully ignored

From ‘Me’ in comments…

What do we make of the newly released 9/11 audio recordings purportedly from the plane cockpits? They faked the bin Laden video so it wouldn’t surprise me if this was faked.

That said, there apparently are victims missing from three flights that day, right? So something must have happened to the planes. They did not crash into WTC 2, which was hit by a ball, Pentagon, which was hit by a missile, and perhaps not WTC 1 either.

Evidence from air traffic controllers was actually destroyed prior to 9/11 commission.

WASHINGTON, May 6 — At least six air traffic controllers who dealt with two of the hijacked airliners on Sept. 11, 2001, made a tape recording that same day describing the events, but the tape was destroyed by a supervisor without anyone making a transcript or even listening to it, the Transportation Department said in a report today.

The taping began before noon on Sept. 11 at the New York Air Route Traffic Control Center, in Ronkonkoma, on Long Island, where about 16 people met in a basement conference room known as “the Bat Cave” and passed around a microphone, each recalling his or her version of the events a few hours earlier.”

What facts did THOSE tapes have on them?