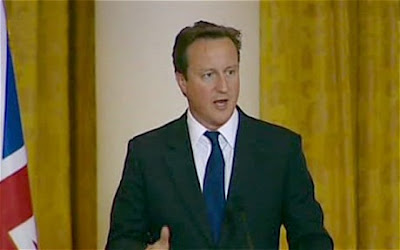 Nigger-killer on parade today at the scene of his crimes

David Cameron is visiting Libya today. Not a nigger in sight. Will he even have one word for the poor people his misguided policies are sending to miserable deaths at the hand of the criminals he supports? Of course not!!!

The rottenness of his Libyan cave-in to One World Government savages is now all too clear. He’ll be hiding forever as Blair has to do over Iraq. Brits are not hearing anything of what’s really happening in Libya. They can find out now by reading the Wall Street Journal report below.

Come on, Cameron. Take a look a close look at who you’ve allied yourself with, you total moron.

The Wall Street Journal reports today that Black people have been emptied from the City of Tawergha in Libya, their homes razed, and that the words “slaves” and “negroes” are scribbled on their abandoned buildings in the now ghost town by the NATO-backed rebels.

The chilling account of ethnic-cleansing of Black people in Libya, occurring right before our eyes, appears under the headline “Revenge Feeds Instability in Libya.”

These are the “liberators” that President Barack Obama, President Nicolas Sarkozy and Prime Minister David Cameron helped install in Libya to replace Maummar al-Quathafi? They all rejected an African Union proposal that would have brought a ceasefire and the warring parties to a table to create a constitution and to hold elections.

Meanwhile, the so-called “prime minister” of the “rebels” Mahmoud Jibril, is quoted in the Journal, with respect to the fate of the Black citizens of Tawergha, saying: “Regarding Tawergha my own viewpoint is that nobody has the right to interfere in this matter except the people of Misurata,” who are actually the ones doing the cleansing. Surely Jibril knows that he’s inciting to further ethnic cleansing.

An earlier Wall Street Journal article had reported that the Misurata unit carrying out the deed is called “The Brigade for Purging Slaves, black Skin.” So we are witnessing genocide of Black people in Africa again and doing nothing. Simply because Washington, London, and Paris happen to support the “rebels” who are committing the targeted killings.

“Now, rebels have been torching homes in the abandoned city 25 miles to the south,” of Misurata, reports the Journal. The Journal’s reporter also witnessed the burning of “more than a dozen homes,” and adds, “On the gates of many vandalized homes in the country’s only coastal city dominated by dark-skinned people, light-skinned rebels scrawled the words ‘slaves’ and ‘negroes.'”

Resistance by the loyalist forces in Libya has escalated with major
clashes between supporters of the Gaddafi government and the U.S.-NATO
financed rebel National Transitional Council (NTC). For over two weeks
the western-backed leadership along with the imperialists have been
pressuring the people of Bani Walid to surrender and allow the seizure
of their city of 100,000 people in the western region of this
oil-producing North African state.

After failing to convince the leadership of the city to give in to the
neo-colonial aims of the NTC and their backers, several attempts by
the rebels and NATO to attack Bani Walid and its environs have been
repelled by the armed organization of the people. In these recent
skirmishes, it was revealed that the Libyan military still maintains
the capability to engage in both offensive and defensive operations.

Prior to the attempt to enter Bani Walid, the armed forces of Libya
shelled with grad rockets the positions of the NTC rebels outside the
city. When rebel units approached the northern entrance of the town
they were hit by additional mortar rounds and sniper fire.

After the withdrawal from the areas approaching Bani Walid, the NTC
rebels set out to reinforce their units in the approach to Sirte, the
western coastal city that is a strong area of support to Col. Muammar
Gaddafi. The effort to approach Sirte was also met with stiff
resistance by the loyalist forces prompting the rebels to retreat 125
km from the city.

The prevention of the rebels from entering these areas exposes the
falsehood that the Libyan government does not have continuing support
inside the country. Prior to the invasion of Tripoli, demonstrations
of millions of people came out in support of the government and in
opposition to the U.S.-NATO war.

NATO escalated its bombing operations over both Bani Walid and Sirte
in the days leading up to the expiration of the deadline given to the
people to surrender. There were reports that NATO advised the rebels
to withdraw pending additional air strikes against the loyalists in
these cities still under the control of the government.

Additional offensive operations by the loyalists against the U.S.-NATO
war in the country included the September 12 bold attack on the oil
port at Ras Lanuf, a major focal point of the war over the last seven
months. It was reported that 17 NTC rebels were killed in the attack
that came after the workers set fire to sections of the refinery as an
act of sabotage against the imperialist plan to steal vast amounts of
oil from the state that prior to the war produced 1.5 million barrels
per day of high grade crude.

On the same day, September 12, there were attacks against rebel NTC
forces at the airport outside Tripoli where explosions were heard in
the distance. During this same time period there was an escalation in
snipping against NTC elements throughout Tripoli.

Even the New York Times admitted on September 12 that “Abdulrahman
Busin, a spokesman for the council’s military operations, said the
attack on Ras Lanuf was apparently a response to news that the council
had taken steps to restart oil production, which had been one of the
country’s major contributors of income before the conflict. He said
that forces allied with the council were still fighting loyalists to
bring an industrial area in Ras Lanuf back under control.” (NYT, Sept.
12)

Eye witness report from Libya from Mahdi Nazemroaya, talking on his return to Canada. He was in Libya over two months, after being in Malta, Italy and Tunisia. he left Libya in August. Situation was not bad apart from assassination attempts, targeted attacks. Tripoli did not fall because of real war but because of psychological war – the seeding of false reports in the media. He reported that fear was he problem at the time and that collapsed Tripoli.

But the regime has not collapsed. The fighting is not over. The fighting will not end for a long time. There will be a heavy toll in Gaddafi’s hometown.

There was an amphibious assault from the harbour after heavy bombing of Tripoli.

Q. what about the war crimes.

A. the war crimes are horrendous. these are fellow Libyans who are being butchered, murdered. there’s good people on both sides. there’s bad people on both sides. the libyan regime is not the aggressor. it is the victim. NATO bombs hospitals, medical facilities, water supplies, sites for physically disabled people. They bombed communication facilities. They targeted Libyan journalists. NATO are letting weapons in to the rebels despite the story in the news that weapons are embargoed. Special forces are coming in from the Med coast, countries including France.

British and French special forces, forces from Qatar, Emirates, Jordan, are all there. The biggest contractor of mercenaries in the world is the USA, while they accuse the Libyans of doing so.

The US is bringing Al Qaeda in to fight against Libya, various groups who fight in a religious context. The journalists were terrified for their lives. The Libyans on the Transitional Council side said that it was the Americans who brought in Al Qaeda, not them. They didn’t want them there.

NATO wanted the journalists to stay in the hotel where they were at risk. They wanted to keep them holed up. ‘The Red Cross and a former congressman were responsible for getting us out and saving our lives’.

Norway and Sweden also helped in this war with the bombing. One man was bombed by the rebels. He saw the coverage and saw how it was being blamed on Gaddafi. He was traumatised by seeing how his enemies were being lauded and made to sound like freedom fighters, when they were the ones killing civilians like him.

Libyan society is heavily scarred. The racial cleavages within Libya are made much worse now. Terrible scarring of people. They magnified the racial schism and manipulated it. Both sides were manipulated into war. Many Libyans fighting were poor. I told them ‘You’re Libyans. Don’t kill each other’. They were locked into group thing. 3000 died in Tripoli in just 2 days. Tripoli is worse than Sarajevo. The war is just not worth it.

There has been massive rape. There were snipers firing at both sides to stir up hate. The foreigners were manipulating the hatred on both sides. Women were gang raped, then tortured, breasts cut off, cigarette burns all over their bodies and then killed. The beheadings were terrible. Arms cut off. Throats cut. Prisoners killed.

The Radisson has been turned over to the Americans as an interrogation centre. People are being shot in their rooms, and tortured there. Combatants on both sides are about 25,000 people maximum.

Al Jazeera reporters really manipulated their reports. They reported the roads were cut to Tripoli and this created panic in the city. They cut off vital supplies to the City. They didn’t have enough troops to occupy the city, so they imploded morale by cutting off water, medicines, food etc. Then they carpet-bombed the city.

NATO attacked the check points in the city, mostly occupied by volunteers to maintain security, nothing to do with the fighting. They attacked these with helicopters and cleared the road into the city. Now the fighting’s all over Tripoli.

The fighting is not over at all. The country will be made into a colony in time, but it’s not there yet.

Mainstream media is reporting falsehoods. They call legitimate forces of Libya ‘Gaddafi forces’. This is political language. These people are not as bad as they are made out. All the networks have security people, and are integrated. The BBC showed footage of Indians, claiming they were Libyans.

I said to the journalists – ‘Look what your reporting has done. Can’t we make a better world?’

SUMMARY – the media is a huge integrated machine. It is directly linked to the military – everywhere. Diversity would help. Listen to both sides of the argument. The media is deeply involved in perception management. War is never a solution.