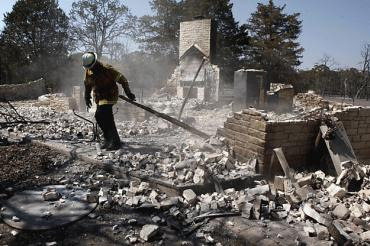 So far there have been nearly 800 such ‘wildfires’. Media reports quote government blaming residents for careless preparation against fire hazard. But how come only the houses are burned and nothing else? There is no fireblack even on the remaining brickwork. It looks more like a bomb strike

A comment comes in asking us to look at this. How can a house be burned to nothingness with all the trees green and intact alongside and around, the garden green and no blacking of the plants and so on?

What caused such a fire?

The flame shot up from the canyon below travelling at incredible speed, and they got out in time.

The commenter thinks the scene looks odd. I agree.

Hi Tap, Again, this is not your topic, but I really wanted to let you know. CNN video “With home now nothing but ashes, Texas family vows to rebuild” By Rich Phillips, CNN September 7, 2011 8:25 a.m. EDT http://www.cnn.com/2011/US/09/06/texas.fires.family/index.html
In this video, I found very strange scenes. When the home owner came to see her house, she found two small oak trees just in front of her house were intact with beautiful green leaves. Her house was completely burned down to the ground. Nothing left around her house. But still her lawn was beautifully green, too. CNN reporter showed the direction the fire came. He said the fire cross the highway which was a quarter mile away from her house. I could not see anything burned between highway and her house. All the trees and weeds were green. Even two wooden chairs were intact. I want you to check this CNN video to see this is normal. I feel this fire was manipulated, and the burned places were selected rather than random. Thank you.

TAP – It looks like the fires could be grass fires more than forest fires. The houses explode on the inside from the intense heat according to this report, it is stated. Yet……

…..how is there invariably no fire black on the remaining bricks? Is there someone out there who can explain what kind of fire has no blacking effect?

This next video which is not embeddable shows the actual fires burning destroying houses at random, with some burning or burnt while others are untouched right next door. The plants are all green, as in other videos and garden furniture at the burned houses is untouched in the yards. One house is smoking from the inside with no fire around at all, and no flames visible. It is the oddest scene and nothing like a forest fire. As the video says, shot by a resident,

“There’s Nothing Left of These Houses:” and at the end, ‘I’m getting outta here’ – even though his own house was under threat, which he could have tried to save but preferred not even to try. He seemed to know his life would be at risk if he went inside his own house. In normal forest fires you can save a house by using water from a bucket and a bath (tub) full of water.

COMMENT – At 00:40, there were the exact same two wooden red chairs as the CNN video on this page “Wildfire victim returns to what was home” at 01:30. Is this just the co-incidence? Or…?

TAP – There is enough weird evidence that these fires are not normal without the chairs being needed to add drama. People do buy the same stuff!