Sent in by Zheng Yong from Singapore..

Was peace-loving Bilderberg-opposing John Smith eliminated in this way, to make way for warmonger Blair? 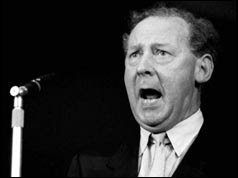 Tap, you mention that could John Smith have been done away with to make way for Blair? Well how about an earlier one. What about Hugh Gaitskell, who three weeks after giving a speech that was very anti EU,saying a 1,000 years of British history would be lost forever if we joined, suffered a heart attack.

Good ‘ole Mr.Wilson,who was very pro EU took over the Liebor Party and proceeded to destroy our Once Great Country.

How about Robin Cook , the hero of the anti-war warriors was the former Cabinet minister who just happens to have resigned in Parliament over Blair’s Iraq motion. Died of a heart attack aged 59.

Annie Machon the M.I.5 whistleblower has said she briefed Robin Cook weeks before he died and he was angry at Foreign office funding and support for Al Qaeda:

When Ron Paul routinely trounces his opposition in post-debate polls, the establishment media dismisses the outcome as not being reflective of national trends. However, a new CNN survey confirms that the Congressman is a top tier candidate and his popularity is rapidly accelerating.
In a national poll conducted by CNN which surveyed over 1,000 Americans between September 9-11, Paul came in fourth just 6 per cent behind Mitt Romney in second , with Sarah Palin third and Rick Perry leading.

“Besides Perry and Romney, Paul beat out the rest of his competition by 7 percent or more. Paul’s support also increased by six percent from the CNN poll that was conducted between August 24-25, 2011,” reports The State Column.

So in effect Ron Paul has doubled his national support in the space of just over two weeks alone, no doubt as a result of his sterling performances in the recent Republican debates. Polls show that the Texan Congressman has emerged victorious from every debate thus far.

Rick Perry is clearly the frontrunner at the moment, receiving 30 per cent in the CNN poll, but he is there to be shot at and his popularity is quickly losing steam. The Texas Governor was whacked from all sides during the debate last night and the more people learn about his involvement in the HPV controversy, his tax hikes and his globalist tendencies, the myth that Perry is a down-home conservative will swiftly evaporate.