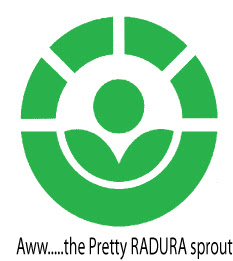 Irradiated food is not always marked. If it is, this cute little symbol informs you that a massive dose of radiation has killed off all bacteria within the food, changing its chemical composition.

This piece applies mostly to the USA, but many of the points raised apply anywhere in the world.

The FDA presently supports and actively promotes the use of Cobalt-60 culled from Nuclear Reactors as a form of “electronic pasteurization” on all domestically produced conventional food. The use of euphemisms like “food additive” and “pasteurization” to describe the process of blasting food with high levels of gamma-radiation can not obviate the fact that the very same death-rays generated by thermonuclear warfare to destroy life are now being applied to food to “make it safer.” This sort of Orwellian logic, e.g. WAR is PEACE, is the bread and butter of State-sponsored industry propaganda.

When you buy conventional food, there is little assurance that it has not been irradiated. Although labeling requirements specify that irradiated food sold in stores should have the international symbol – the Radura – affixed to it, oversight is particularly poor in this regard, and restaurant food and processed food containing irradiated ingredients are not legally required to be labeled as such.

Labeled, or not, irradiated food is exposed to the same ionizing gamma-radiation that destroyed life in Hiroshima and Chernobyl. “Primitive” lifeforms like microbes refuse to ingest irradiated food, but humans are gullible enough to believe industry pundits and governmental “authorities” like the USDA and FDA, who say doses of radiation applied to your food up to and quite close to a billion chest x-rays worth of ionizing radiation is safe for human consumption.

Despite the irresponsible promotion of this process as safe, food irradiation destroys much of the vitamin content of food, produces a number of toxic byproducts: formaldehyde, benzene, and formic acid, as well as unique radiolytic products, e.g. 2-alklycyclobutanoes, that have been demonstrated to be cytotoxic (damages cells), genotoxic (damages DNA), and carcinogenic (causes cancer) in test tube and animal studies. (View Peer-Reviewed Research on Irradiation Here). How is it that a process that is so obviously detrimental to human health is allowed? There are at least three reasons driving this dangerous process:

1) Food irradiation allows for the continuance of the fundamentally unsanitary and unsafe farming practices considered essential for the profitability of large corporation owned factory farms. When raw human sewage and wastewater in combination with manure from sick, antibiotic-raised animals is used as fertilizer, virulent strains of antibiotic resistant bacteria can infect the product, getting deep within its tissues where chemical sanitizers can’t reach. Gamma-radiation, which effectively penetrates deep within the product, enables the irresponsible, immoral and unsanitary conditions to remain.

2) The increased stabilization and reduction in perishability provided by food irradiation supports the continued globalization of food production and distribution, furthering the agendas and profitability of transnational corporations, whose respect for the sovereignty, constitutional rights and public health of the U.S. or any other nation, is secondary to the primary aim of raw, unregulated capitalism in pursuit of profits at all costs.

3) Finally, the military-industrial complex requires that the public perceive nuclear energy as not just an element of war, or potential ecological disaster, but as something “beneficial” that may protect us from harm. Nuclear waste, once the irrepressible hobgoblin of the nuclear energy industry, is suddenly transformed – under the guidance and support of our government – into both a profitable commodity and a “therapeutic” agent.

In the same way that irradiating bacteria contaminated food does nothing to remove the unsanitary processes that cause the underlying problem, in 2006, the FDA passed, without any public review or oversight, the use of bacteriphage virus “cocktails” to be sprayed on meat, in an attempt to prevent Listeria monocytogenes outbreaks. These bacteria-specific viruses, in theory, lay dormant waiting for virulent and antibiotic-resistant bacteria upon which they prey. Although the FDA only approves the use of lysic bacteriphages which are not believed to alter the DNA of the cells they infect, the possibility of contamination with lysogenic strains which can alter DNA is significant, owing to the fact that these viruses are only between 20 and 200 millionth of a millimeter in size. The FDA’s decision to define bacteriophages as “Generally Recognized As Safe” (GRAS) food additives is premature, and therefore a red flag to those who are concerned about the underlying food safety issues that are not being addressed.

With the country still reeling from the implosion of the financial markets, new attention has been placed on the huge trade deficits the US has with its trading partners. One major factor in our increasingly disadvantaged global trading position is our decision to use Genetically Modified Organisms (GMO’s), despite growing concern over its short and long term adverse effects on the health of the human body and the environment. For example in 2006 “the most significant event in the history of the U.S. rice industry” occurred, according to David Coia of the USA Rice Federation trade group, when trace amounts of genetically modified rice was found commingled in the U.S. rice supply.

According to GreenPeace the U.S. sustained approximately 1.2 billion dollars in losses, when over 30 countries were affected by the contamination, and many closed their markets to U.S. rice, including the European Union and the Phillipines. Why the global outcry? Despite our government’s arguably criminal avoidance of the evidence linking genetically modified food to adverse health effects, the governments of other nations are aware of the dire risks to human and environmental health these GMOs pose. America is the only country in the world which does not require GMO ingredients or foods to be labeled as such. We can’t expect the rest of the world to so carelessly experiment on its population with foods that have been profoundly altered to contain potentially toxic gene products from other species. Their reluctance to participate in the largest food experiment in the history of our species is directly reflected in the world’ s increasing resistance to accepting food exported from the U.S., which has had huge impacts on our economic well-being. If you wish to withdraw yourself as a guinea pig from this national GMO experiment, remember, the only way you can know for sure that you food is not genetically modified is if it is certified organic. (to learn about the devastating health effects of GMOs, go to seedsofdeception.com)

Food quality has become an oxymoron in this country. With the state-sponsored promotion of food irradiation, virus-laden food additives, genetic modification, pesticide usage and raw sewage fertilizer, Americans who don’t go out of their way to buy only organic food, are unknowing participants in the largest food experiment ever performed in recorded history. Not too long ago, all cultures considered food sacred for its ability to sustain our physical, emotional and spiritual well being from the ground up. Today, the forces of commodification and naked, “free market” capitalism have converted food into devitalized metabolic poisons, which slowly render those who consume them into commodities themselves, i.e. sickened patients, against whom are plied the thousands of branded ‘snake-oil’ remedies conjured up by the Diseasestablishment’s cauldron-like pharmacopeia.

Remember, next time you shop, know that buying organic isn’t just about it being more nutritious than conventional food; rather, it provides the only assurance that can still shield you from the veritable minefield of potential health liabilities which is lurking within every supermarket across the land.

3 Responses to “Health Liabilities Lurking In Every Supermarket”