Nasa scientist says all talk of Nibiru and catastrophic solar flares in 2012 is false. He confirms the next solar maximum is spring 2013, but says it will not be a harmful event. How does he know?

Here is Gordon Logan’s opinion, based partly on broadcasts currently being put out in China, which are stating that the 2013 event is expected to be a big one. Logan matches that to the capability of the elites using HAARP to make holes in the magnetosphere, which the Chinese believe is being planned to attack and kill off the bulk of humanity.

How do I know that the Carrington event will be in April 2013? Because that was what CCTV2 said in its documentary around 23rd April. I don’t understand Chinese but my wife gave me the gist of what was said. What is strange is that for a month before the programme I had been doing research into HAARP and had found out that it could damage the magnetosphere. This led me to the Carrington event. I also found out that there was not one but many HAARP facilities around the earth’s surface. Then I found the NASA report about five Themis satellites that had detected the disappearance of the magnetosphere in 2008. Apparently, scientists were astonished because the hole was ten times bigger than anything seen before. I found this very suspicious because HAARP can do precisely this sort of thing.

Jesse Ventura, who did a documentary on the Carrington event, moved down to Mexico, where he has bought an isolated property with no connection to the grid. As you know, the Chinese are preparing for up to three and half years without electricity. Ventura has also been told that the magnetosphere will be down, so he’s clearly expecting the worst, which is why his new house isn’t connected to the grid. According to him, deep shelters are being built in America. In Moscow, the Russians are building shelters for millions. Similar in Shanghai. They are expecting a catastrophic solar storm.

I cannot see the NWO World Government passing this opportunity up. It’s a golden opportunity for massive and rapid depopulation now that they have tested the technology for removing the magnetosphere, which is the shield that would otherwise protect us from the blast of billions of tons of neutrons.

What was strange here in China was that when I started studying HAARP, the Chinese unblocked my access to Youtube, so I was able to find a lot of stuff that otherwise I wouldn’t have found. At the time, I was teaching a writing course and had given my students an assignment on HAARP and how it was being used. It was used in Sechuan to destroy an underground nuclear weapons facility. The Carrington event stuff wasn’t part of the course, but apparently the Chinese authorities knew what I was researching from surveillence of my internet use. I heard that they had said that my work was “very important”, so I know I was onto something.

What was I on to? The HAARP connection, because that wasn’t mentioned by the Chinese documentary or Ventura. Jonathan Porrit was talking not so long ago about reducing the British population by half to thirty million. The whole environmental racket is a run up to two things: a mass extinction event, preceded by a massive concentration of wealth using the financial crisis, and in America, the expropriation of public and private land by means of Agenda 21, the Environmental Protection Act and Biodiversity legislation. HAARP weather events are now also being used to drive Americans off their land. The Muslim wars are another vehicle for the expropriation of strategic wealth, both from the victim countries and from the increasingly indebted United States. The crisis of the euro will also result in the massive expropriation of sovereign wealth. According to Fulford, the Japanese have been forced to hand over huge amounts of money as well, while not being allowed to divest themselves of their dollars.

So you’ve got two things: global robbery followed by global extinction – all directed by the ‘dark force’ in the City of London.

This clip explains how powerful the 1859 Carrington event was, which melted all the wires on telegraph poles across the earth. The results would be catastrophic if this were to happen today with every electrical device on earth and above ground made inoperable. So far the earth has been lucky, and this hasn’t occurred for 150 years. If this does occur, and the elites dismantle the magnetosphere at the same moment, which they know how to do using HAARP, we are all toast….bar those who rush to their underground bunkers.

Wikipedia on the solar storm of 1859

Ice cores contain thin nitrate-rich layers that can be used to reconstruct a history of past events before reliable observations. These show evidence that events of this magnitude — as measured by high-energy proton radiation, not geomagnetic effect — occur approximately once per 500 years, with events at least one-fifth as large occurring several times per century.[3] Less severe storms have occurred in 1921 and 1960, when widespread radio disruption was reported.[4]
[edit]Sunspots

From August 28, 1859, until September 2, numerous sunspots and solar flares were observed on the sun. Just before noon on September 1, the British astronomer Richard Carrington observed the largest flare,[4] which caused a massive coronal mass ejection (CME) to travel directly toward Earth, taking 18 hours. This is remarkable because such a journey normally takes three to four days. It moved so quickly because an earlier CME had cleared its way.[4]
[edit]Carrington Super Flare

On 1 September 1859, Carrington and Richard Hodgson, another English amateur astronomer, independently made the first observations of a solar flare. Because of a simultaneous “crochet” observed in the Kew Observatory magnetometer record by Balfour Stewart and a geomagnetic storm observed the following day, Carrington suspected a solar-terrestrial connection. World wide reports on the effects of the geomagnetic storm of 1859 were compiled and published by Elias Loomis which support the observations of Carrington and Balfour Stewart.
[edit]Magnetic storm

On September 1–2, 1859, the largest recorded geomagnetic storm occurred. Aurorae were seen around the world, most notably over the Caribbean; also noteworthy were those over the Rocky Mountains that were so bright that their glow awoke gold miners, who began preparing breakfast because they thought it was morning.[4] According to professor Daniel Baker of the University of Colorado’s Laboratory for Atmospheric and Space Physics, “people in the northeastern U.S. could read newspaper print just from the light of the aurora.”[5]
Telegraph systems all over Europe and North America failed, in some cases even shocking telegraph operators.[6] Telegraph pylons threw sparks and telegraph paper spontaneously caught fire.[7] Some telegraph systems appeared to continue to send and receive messages despite having been disconnected from their power supplies.[8]
[edit]News coverage

On September 3, 1859, the Baltimore American and Commercial Advertiser reported, “Those who happened to be out late on Thursday night had an opportunity of witnessing another magnificent display of the auroral lights. The phenomenon was very similar to the display on Sunday night, though at times the light was, if possible, more brilliant, and the prismatic hues more varied and gorgeous. The light appeared to cover the whole firmament, apparently like a luminous cloud, through which the stars of the larger magnitude indistinctly shone. The light was greater than that of the moon at its full, but had an indescribable softness and delicacy that seemed to envelop everything upon which it rested. Between 12 and 1 o’clock, when the display was at its full brilliancy, the quiet streets of the city resting under this strange light, presented a beautiful as well as singular appearance.”

TAP – It seems that as a Carrington event happens only every five hundred years, one is not all that likely to occur in the spring of 2013, but a lesser event seems likely. If HAARP dismantles the magnetosphere at the same time, when the sun flares to a lesser degree, which seems very likely, this could still make billions of people very sick. If it was a Carrington, and the magnetosphere is HAARPed, we would be of course all toast.

IDEA – why doesn’t the USAF leave the Libyans alone, who are putting up a great fight, surprising the elites, and instead, bomb all these damned HAARP facilities around the globe? Colonel Gaddafi would be vastly preferable to any of our own governments who keep silent while the HAARPists plan and carry out the ongoing destruction of the environment and of humanity. They might even stop the volcanic destruction of the western United States at the same time.

UPDATE – From Gordon Logan. The White Knights fight back…. 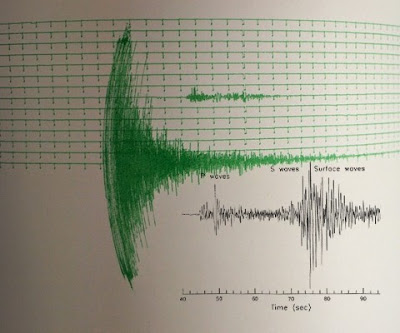 The jpg shows the Washington nuclear detonation in green compared to an earthquake in black.

The Aquino paper on HAARP appeared in July, which means that the scientists are now onto HAARP.

Seismology charts are now revealing that the 5.8 magnitude tremor that rattled the entire East Coast including Washington DC was not a natural earthquake but an earthquake that resulted from an underground nuclear detonation. The image above is a seismograph from Washington and Lee University, (similar one found on www2.tricities.com website) about 85 miles southwest of the earthquake’s epicenter in Mineral. The green lines indicates the tremor that was felt in Washington DC which caused damaged to the Washington Memorial and the Washington National Cathedral. The black lines is a transparent overlay of a seismograph from a pdf file from Virginia Division Mineral Resources on Earthquakes.

The jpg in the article shows the Washington nuclear detonation in green compared to an earthquake in black. 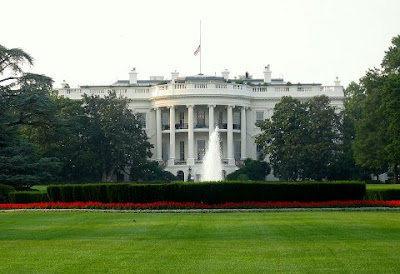 The unheard of occurred in Washington DC this afternoon August 23, 2011. A shallow 5.8 magnitude earthquake shook Washington DC this afternoon. The epicenter was 84 miles SW of Washington DC. Early in the day another shallow 5.3 magnitude earthquake shook Denver Colorado. Both earthquakes occurred just south of key U.S. government centers. Washington DC is obvious and Denver is now home to the CIA domestic operations which is responsible for operations and recruitment in the United States. The CIA recently moved there from the CIA’s Langley Virginia headquarters.
An earthquake has never been felt in Washing DC before. Denver is familiar with earthquakes. Is it just a coincidence that ABC news anchors warned of possible terrorist attacks against the United States before the 10th anniversary of 9/11?
The U.S. Geological Survey said the Virginia earthquake was 3.7 miles deep. Shaking was felt at the White House and all over the East Coast, as far south as Chapel Hill, N.C. Parts of the Pentagon, White House and Capitol were evacuated. The quake was in Mineral, Va., in Louisa County.
The magnitude 5.3 Colorado quake hit nine miles southwest of Trinidad, or 180 miles south of Denver, according to the U.S. Geological Survey’s National Earthquake Information Center in Golden. It had an estimated depth of 2.5 miles (4 kilometers) and was felt in a relatively large area of southern Colorado and northern New Mexico.
How do these earthquakes compare to a nuclear detonation, as warned by ABC (refer to Featured Videos 3 and 5 ) . A 6.0 magnitude earthquake is equivalent to the nuclear detonation by the U.S. against Hiroshima, Japan.

The revolution seems to have started.

The bankers are in serious trouble.