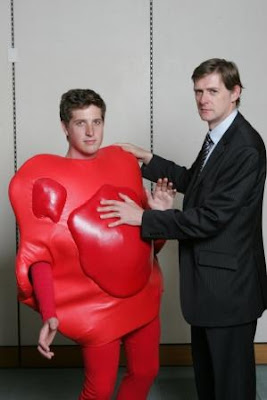 Mike Crockart MP trying his best to ‘Stop The Clot’. Did he mean Gordon Brown? He clearly prefers not to face an electoral challenge from another Gordon, Gordon Logan, the ex-spy who felled the career of Tony Blair. Is that the reason the government refuses to issue Mrs Logan with a visa?

RE: from Mike Crockart MP’s office

RE My Wife’s Visitor’s Visa

If that phone number is like the other public Home Office numbers, you can call all day and it will always be busy. If you manage to get hold of a number that somebody answers, they talk to you as if they’re the NKVD around 1938.

After I sent you the link to the story about why Blair didn’t get the EU presidency, someone drove a lorry onto the pavement at 38 Craigleith Drive in the middle of the night and knocked down our front wall then drove off again.

I can’t understand why the Entry Clearance Manager rejected the appeal. I’ve got a contract and we’ve got money, which is what they want, so what the hell’s going on? My elderly mother keeps calling me from Edinburgh to ask what’s happening. The Home Office have forced her to live alone for two and a half years at the age of 85. My daughter’s missed two and a half years of school. We’re only applying to go on holiday and meanwhile they let every Tom, Dick and Harry into the UK.

Get onto the Home Secretary about this. This is an outrage. We’ve got a home in Edinburgh and we’re not even allowed to go there on holiday. We’re British for f***’s sake.

Just to remind me you. I had a job in the UK and I was going to stand for Parliament against Mike. MI5 immediately panicked and asked their Chinese pals to order my wife to call me and get me out of the UK asap because I was onto Robin Cooks’ killer. Do they dispute that? The Home Secretary should kick Evans’ stupid backside.

Please send this to every member in the House. It’s time they knew what a shithouse Britain has become.

PS And tell them: none of that Ms crap. My wife’s been married for ten years even if that means f*** all in Blair/Cameron’s Britain.

TAP – as a fellow sufferer from UKBA’s visa issuing policies, I wish you all the best with your endeavours. I also have an 80+ year old mother who we have to abandon when visas exile us from the UK, yet so far no one has rammed a truck into the garden fence to try to influence us in any way.

This short video of Nigel Farage, in action at the European Parliament yesterday is worth a look imo.

Still struggling a bit with the theory of Markel possibly being Hitler’s daughter! But, it’s not impossible.
I wonder how they freeze sperm without killing it?

Regarding the alleged explosions in the elite’s underground bunkers recently. Do we know whether it
was the White Dragon Society or the US military who carried it out.

If it was the US military was it under orders
from the elite i.e. false flag, unlikely I would imagine. Or, perhaps some members of the military acting on their own
initiative?

As I remarked recently, it’s all becoming quite confusing, which is not surprising I suppose.

TAP If there are moves being made to stop the elites by someone brave enough to fight them on our behalf, we have to be most grateful – and hope they can continue to chip away at their mad schemes.

3 Responses to “Give Gordon Logan’s Family A Visa”