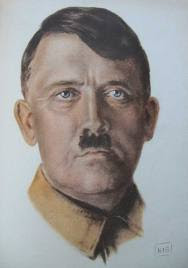 The shape of the eyes is similar, and the mouth.

You read all kinds of things of the net. Some things seem true. Others nonsensical. Yet others are clever manipulations that are hard to sift out what is true from what is false. One of Ben Fulford’s claims is that Merkel is a daughter of Hitler. This claim has been made in other places. How can we verify such a suggestion?

If Hitler suffered from syphilis, he can hardly have been into abstention. He must have ‘knocked off’ a fair few admiring lovelies, and such encounters could obviously have resulted in some kind of ‘output’. Not all these kids would have died. Yet most or all would deny their descent from one such as he.

It’s late and I felt some light relief would be an appropriate way to end a busy evening on the blog with many excellent comments and links. Thanks to all who contributed.

Bear in mind that Hitler would either have to have been airlifted out of Berlin, as many claim he was. Or his sperm would have had to be frozen, which is also claimed to be true. Or as seems to be the case, both. More details below. 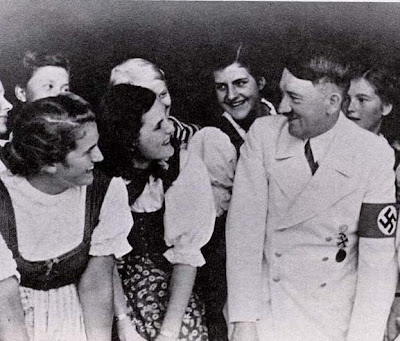 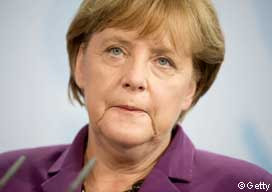 Adolf and Angela share facial features – eyes and mouth similar, and similar lines down from the edge of the mouth.

Angela Merkel was born in the D.D.R., the Communist portion of Germany in 1954. Her biography says she was born on July 17, 1954, and that she is the daughter of a Lutheran minister from an East German-controlled church. Recently, however, Soviet KJB archive files reveal an entirely different story. Stasi GDR files indicate that she was born on April 20th, 1954, and details of her birth were included in the records of the German Dr. Karl Klauberg, who was one of the Nazi “death doctors” convicted by Soviet courts and imprisoned. When he later was recognized as a brilliant scientist, he was released after seven years and was recognized as the father of artificial insemination.

The Soviets were even more intrigued when they discovered Dr. Klauberg had preserved frozen samples of the sperm of Adolf Hitler.

The forces of darkness in high places decided to try to produce a child from Hitler’s sperm, obviously for occult and illuministic purposes. Dr. Klauberg then brought the youngest sister of Eva Braun (Hitler’s wife), whose name was Gretl, to Eastern Germany, and the result of the experiment produced not a biological son of Hitler, but rather a daughter. 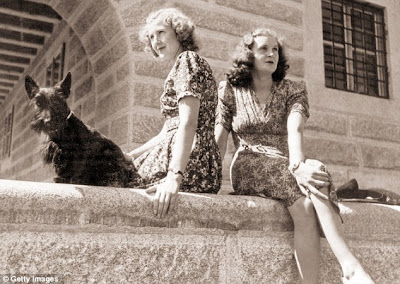 Eva Braun with Gretl her youngest sister. Eva Braun has a Merkel look.

Amazingly, Adolf Hitler was born on April 20th, 1889, and Angela Merkel was born on April 20th, 1954. (April 20th is 11 days before the witches’ high sabat of Beltaine.) Angela became a custodian of the Catholic Church through its connections with the East German Lutheran Church. Once a German Pope would take the Roman throne, Angela Merkel was to also take her biological father’s position as German Chancellor. 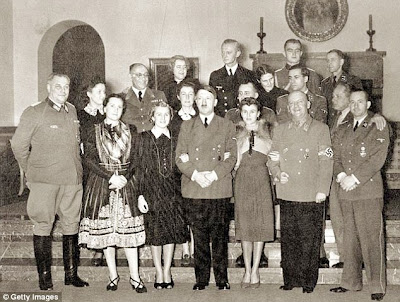 Hitler arm in arm with Eva and Gretl, claimed to be Angela Merkel’s mother.

On April 20th, 2005, the Nazi Joseph Ratzinger became Pope Benedict XVI, (16th), precisely on the 116th birthday of Adolf Hitler. Then on November 22nd, 2005, Hitler’s biological daughter, Angela Merkel was elected Chancellor of Germany. The day of that election, November 22nd, was the anniversary of the publication of Charles Darwin’s Origin of the Species, which is an antichrist publication denying the Creator of the universe.

If the Soviet record is true, and the evidence is strong, it opens up some amazing possibilities. The undeniable fact is that Angela Merkel came from obscurity to triumviral power as German Chancellor, President of the European Union, and head of the powerful G-8 economic cartel. When I began to do further research on this, I discovered that Hitler’s father, who took the name Hitler, was the illegitimate son of a Rothschild mistress whose last name was Schicklgruber.

The etymology of the name Hitler reveals that the name means a shepherd who lives in a hut. The name Adolf from Old High German means noble wolf. Thus, his combined name indicates that he was the Shepherd Wolf, or false shepherd. Strangely enough, Pope Ratzinger, or Benedict XVI, also has the title of Shepherd of the Church, and since he took office, the Roman Catholic Church has had a German shepherd. Incidentally, that breed of dog resembles a wolf.

One more interesting point is that Chancellor Angela Merkel has an unusual obsession with the works of the occult composer Richard Wagner, who was a Satanist. She made her obsession known in an interview with the newspaper Frankfurter Allgemeine Zeitung in July 2005. Wagner wrote the infamous composition called Parsifal, which is purely occult and demonic. Parsifal was a favorite of Adolf Hitler as well, and Hitler stated that the music of Wagner occupied his mind. Angela Merkel, like Adolf Hitler, is deeply fascinated with Wagner’s Ride of the Valkyries.

The valkyries were minor female deities that would ride through every battle to gather the most valiant of the slain and carry them off to a place called Valhalla where they would wait to join the army of Odin in the last battle at the end of the world.

Is this woman, Angela Merkel, being used of Satan to marshal the forces for the last battle called Armageddon? It is also interesting to note that Chancellor Merkel has exactly the same eyes as Chancellor Hitler, and she bears a striking resemblance to him except for the little moustache, of course.

See also this post. Hitler was an art dealer in South America into his 70s. There is a new book on Hitler’s escape from Berlin in my recommended list in the left hand column.

Also see this. Hitler And Churchill Were First Cousins. Both are illegitimate Rothschilds.