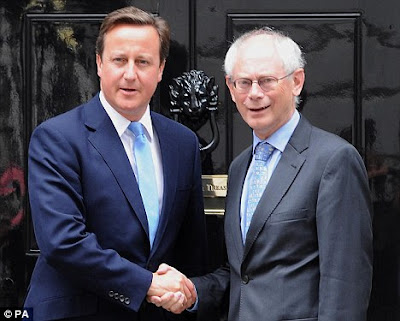 Firm: Prime Minister David Cameron, with the President of the European Council Herman Van Rompuy, dismissed calls for a referendum on membership and says Europe ‘must work’ for Britain

Of course the cartels that control British politics will no doubt infiltrate and destroy such an effort, but full marks for trying, Chaps!!! The best idea is to keep the workings of the group secret, with a cryptic leadership structure.

It’s time the eurosceptic majority in the Commons flexed its muscles, but be careful. OK. Be prepared for a vicious counterattack, which will stop at nothing.

(‘ahem’ refers to the Nadine Dorries effort at a reply put out by Cameron in yesterday’s PMQs. This was considered to be rather poor by many comentators!
Harry Cole)