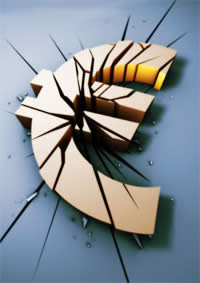 This self-satisfied shitegob needs taking out and throwing in The Thames.
That doesn’t mean he’s wrong.
He doesn’t give one fig for anyone except himself, and his buddies in the financial elites, who he clearly sees as entirely justified in enriching themselves from the coming crash.

What he doesn’t mention, of course, is that they and their ilk caused the crash by flooding the world with exces credit for twenty years, and now they’re all cashed out of the markets, they’re pulling the plug so they can buy back in for a fraction of what the assets are really worth, and then grow supremely rich and powerful in the recovery.

Evil is here talking openly and arrogantly. That’s why these people must be stopped.

The only thing I agree with is the Euro can go to blazes. What worries me is what will follow that. Will Goldman Sachs try and impose a world currency, which will give them supreme control of the earth? No doubt they’ll be trying as soon as the Eurocrash occurs.

On BBC News 24 there was also another similar type of interview on Sunday evening at
approx. 20.30 hrs. In this interview which I saw live another man and I don’t think it was
the same bloke as in this video, said quite openly that Barack Obama doesn’t rule the world,
Goldman Sachs and JP Morgan rule the world!

There seems to be a bit of a theme emerging.

TAP
The theme is the end of the Euro, and the emergence/imposition of the one world currency. Power will vest in a very few hands. The fightback against the elites with the series of underground explosions etc is rushing them to complete their works. The media is laying the trail.

Their latest problem is the collapse in precious metal prices. This was clearly not meant to be happening. The London gold exchange was closed yesterday, as they wrestle to stop the price tanking. Gold is intended to be a key part of the new world currency. That won’t be possible if the price sinks into the cellar. Maybe the White Hats helped the price crash to get going, and Goldman Sachs are desperately trying to stop the rot.

Without QE3, the price of all assets will be tumbling. Gold and silver are no different to anything else from that point of view. We’ve seen numerous governments around the world buying gold of late no doubt in preparation for the one world currency. The collapse of the Euro might be accompanied by a loss of control by Goldman Sachs of the markets, and a postponement. Now that would really be justice. Go the White Hats. Stop the Goldman Gold Boys like Geithner from ruling the world.

The power of the central bankers has grown through the boom years post WW2. The glory days are behind them now, and the crashes that people like the trader above foresees will not bring the days back again. They will depend more and more on terror and war to keep themselves in power. Humanity must start saying NO!