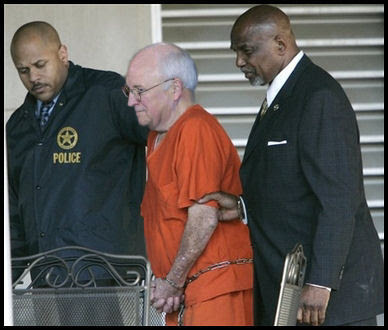 Dick Cheney fears indictment, and is putting out feelers to the White Dragon Society.

Ben Fulford’s latest writing shows that the 30th September quarter end accounting date is going to be critical for the criminal cabal that is running the world’s financial and other systems.

Many long term members of the gang are offering to testify in return for immunity. Fulford always sounds greatly optimistic that the hoods are going to be defeated. With their underground bases being nuked and closed off, and the continuing exposure of their environmental and other crimes, the net is closing in.

“There are many signs available in both the corporate propaganda media and the people based independent media that some sort of end-game crisis is approaching for the criminal cabal in charge of the G7 countries and their shrinking coterie of slave states. With the Pentagon and the Russian military aligned against the cabal, their downfall is close.”

“There are also several senior members of the Bilderberger group who have now promised to work with the White Dragon Society in exchange for promises of immunity. These include Bilderberger head D’Avignon, media mogul Rupert Murdoch, former “black pope,” Peter Hans-Kolvenbach, Baron Thyssen and others. Dick Cheney has also put out feelers offering testimony in exchange for immunity.”

One of the main battlegrounds is now the French banking system… also… the spectacle of the IMF asking for and being denied, financing.

The fact… is that the Khazarian cabal… is being increasingly isolated.

There has also been increased harassment directed at this writer.

Also, the leaders of the Japanese Yakuza groups have… agreed to provide testimony against George Bush Senior, J. Rockefeller and their flunkies about a series of political murders carried out at their behest… Richard Armitage has also privately approached a White Dragon Society member with an offer to testify against Bush and his CIA faction in exchange for immunity.

This week promises to be eventful as the September 30 accounting deadline arrives and senior cabalists scramble to make payments.

THEY WILL BE STOPPED – he finishes.