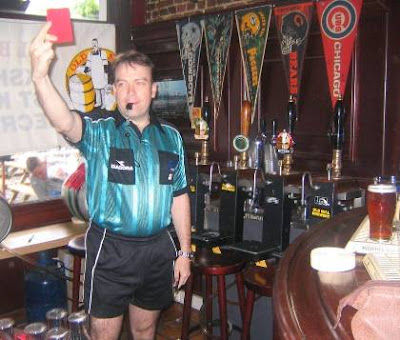 Heaton Harris at a beer festival. This time, we are assured, he’s not taking the piss. He’s running the Open Europe group in the Commons with two others, as they prepare to show the EU the red card.

My former MEP colleague, now Daventry MP, Chris Heaton-Harris, along with Andrea Leadsom and George Eustace, have set up a new group at Westminster for 2010-intake Tory MPs who are concerned about Europe — which is practically all of them. I’m not sure it has an official name, but I’ve seen it referred to as the Open Europe Group, which seems as good a name as any.

At the inaugural meeting on Sept 12th they’d expected around 80 to show up, but in the end over 120 were there. I imagine Chris desperately looking around the Palace of Westminster for extra chairs.

There have been suggestions, primarily but not solely from those terrible chaps at UKIP, that this new group has the tacit blessing — even the encouragement — of the Whips (I must ask Patrick McLoughlin). The conspiracy theory suggests that it’s the leadership’s attempt to channel eurosceptic sentiment on the back-benches into a vocal but harmless talking-shop.

But after ten years together in Brux, I know Chris a bit better than that. If the Whips think they’re in for an easy ride, they may be surprised. So far the demands of the new group have been modest — parliament to vote on the appointment of judges to the Strasbourg Court, and a new “red-card” system for member-states to challenge the Commission. But I expect more substance will follow.

Certainly the mood in Westminster — and in the country — is turning more euro-sceptic by the day, as the euro-zone implodes.

Cameron’s game-plan on the EU?

Cameron knows that his back-benches — and the country — are looking for action on the EU. My bet is that he and Hague will have asked the foreign office (and UKREP in Brux) what they could get away with, and will have been told that a little more flexibility on the Working Time Directive (WTD) might be negotiated. And perhaps even a softening of the proposed financial regulation which would do so much damage in the City.

But clearly that’s not enough. Minor concessions on the WTD won’t even get us back as far as John Major’s famous opt-out’s at Maastricht. We had an opt-out on social policy and the WTD — or thought so, until the ECJ decided that the WTD was not employment policy, but Health’n’Safety.

· A full opt-out from Social and Employment legislation.

· An opt-out on our own terms from environmental legislation (especially on energy and renewables), and on Health’n’Safety.

· Repatriation of agriculture and fisheries.

· Exclusion from the new financial regulation.

· Exclusion from any EU common fiscal policy or budgetary oversight

· Major derogations on the ECHR.

· Complete separation from European defence, except on a voluntary inter-governmental basis.

In fact it would be easier to say what we do want: a free trade agreement, plus voluntary inter-governmental cooperation on other policies.

And one other thing we want: An In/Out Referendum. Now.

Oh well. It’s a start. If there is no progress, UKIP will wipe the floor with Cameron at the next election. (Not that UKIP will do anything much to rock the EU-boat being heavily penetrated by MI5 at regional and national level).