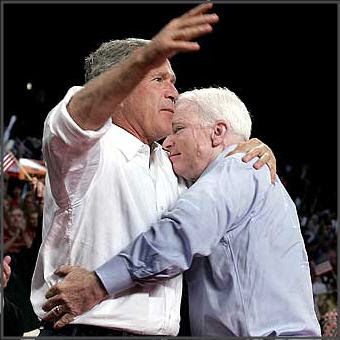 The Zionists like men with guilty secrets to win power. They are easy to blackmail.

I asked former British intelligence agent Gordon Logan what he thought the next story of importance was, after his piece exposing the nuclear attacks on the CIA’s underground bases. Here is his reply, in which he reveals a lot of previously not generally known information about Iraq, Afghanistan, Ireland, Britain, the USA as well as Libya.

About the next big story. It’s the cover up of the rape of Libya. The latest news is that Senator John McCain wants to get hold of the innocent Lockerbie bomber, Abdelbasset Megrahi. McCain disgraced himself in Vietnam by making propaganda videos for the communists. While his fellow prisoners languished in a POW camp, McCain spent his nights with Hanoi whores. So McCain has been blackmailed all his political life. Perfect Zionist presidential material.

The rebels have just lost their field commander at Bani Walid, the small town that they have been trying to take for a month. A NATO destroyer was on fire in the Med after being attacked by the ungrateful townspeople of Sirte, which still hasn’t submitted to NATO bombing. Thousands of miles of desert oil pipelines are impossible to defend from the attacks of Ghadafi’s tribal militia. NATO is still bombing military targets in cities like Tripoli and Misurata that were ‘liberated’ weeks ago. The 32nd Brigade (under the apparently immortal Khamis Ghadafi) attacked Tripoli Airport a few days after the Cameron and Sarkozy in/out photo-op.

Having confiscated Libya’s overseas financial assets, and still being unable to ‘secure’ Libya’s oil wealth, the “donor community” has pledged to lend the (stolen) money back to finance Libya’s post-war “reconstruction”. So thanks to Sarkozy and Cameron, the new Libya joins the tail end of the long line of Rothschild debtor nations each of which is imprisoned in debt by local Zionist traitors. Sarkozy and Cameron have laid waste to yet another Muslim nation.

The overwhelmingly peaceful Libyans, who had nothing whatever to do with Zionist false flag atrocities like Lockerbie, the shooting of Yvonne Fletcher, or the East Berlin disco bombing, are being forced to take up arms to resist a ludicrous government of elderly idiots and Jihadist bootboys foisted on them by NATO. That the outcome will be chaos is obvious. What is being concealed is that there has never been any intention to ‘reconstruct’ Libya. Libya, like Britain itself, will be milked by the bankers for every penny it has.

How many people can NATO kill in say a year?

In Iraq, they managed to kill about 200,000 people every year. In Afghanistan, the figure is in excess of 100,000 per year. In Libya, we can be sure that with thousands of NATO bombing sorties and thousands of Al-Qaeda cut-throats going from house to house, there must be at least 50,000 dead already. One thing is certain. NATO humanitarian missions know no bounds when it comes to mass killing. Even journalists are victims of ‘friendly fire’.

The chaos in Libya, with no prospect whatsoever of ‘reconstruction’ other than the disappearance of huge sums of money, will be a rerun of the ‘reconstruction’ of Iraq. What did the Iraq war cost the gentiles who fought it? Following the ‘Sgrena’ pdf leak from the Pentagon in 2005, we know that the real number of American dead must now be at least 30,000, plus hundreds of thousands maimed physically and also psychiatrically by the new requirements of Zionist war, which routinely include the butchering of whole families by bullet and aerial bombardment and the hands-on torture and murder of detainees. The military heroism of the First and Second World Wars is finished, over, kaput, and has been replaced by massive civilian casualties, journalists lying to the folks back home, and in the case of the British Army, an 85% death rate from accidents and friendly fire.

The figures for the Iraqi dead are much greater. At least one and a half million judging by the Lancet figures given by the BMA. It was of course Mossad officers like Dan Senor who ran the very dirty Iraq occupation, while American generals learnt to keep their mouths shut. The mortality in Iraq was made much worse by false flag sectarian bombings aimed at killing as many Iraqi civilians as possible. False flag attacks are standard operating procedure in the Rothschild/Mossad playbook, as we saw on 9/11, 7/7 and more recently in Norway, when a frequent flyer to Israel, Anders Breivik, attended a political rally and killed 77 teenagers who just happened to be demonstrating against Israeli political crimes (something British journalists omitted to mention).

The most important thing to remember is that the chaos in Iraq was deliberate. Bush senior has admitted that he didn’t overthrow Saddam in 1991 because he and Scowcroft knew damned well that the Iraqi resistance to any occupation would be ferocious. Later in 2002, a group of Mossad agents set up a dedicated office in the Pentagon with the express purpose of forcing America into the second Gulf War, but with far fewer troops than were actually required. They duped Rumsfeld, Bush and Blair into thinking that a quick victory was feasible.

By July 2003, Bush and Blair realized that they didn’t even control the Iraqi oilfields. The psychological effect on both of them was obvious. Blair was a nervous wreck. The architects of the disaster were Richard Perle and Paul Wolfowitz, who also happened to be the architects of the plundering of Russia in the 1990’s with all its ensuing chaos.

Far from being profitable for America, the Second Iraq War has more than doubled the federal debt. As we know, the United State of America, the most powerful nation on earth, cannot print its own money, and is therefore required to borrow every dollar it wastes on Jewish wars, either from investors like the Chinese or from Zionist bankers who simply create the money out of nothing.

The Libya war is another example of planned chaos. The NATO aggressors, all demonstrably bankrupted states lined up for Zionist asset stripping, used the fall of Mubarak in Egypt to smuggle a large amount of materiel into Libya, along with an irregular army of terrorists freed from prison ships and the jails of Iraq, Afghanistan, and the countries of ‘extraordinary rendition’. Under the control of NATO special forces, who kept order by summary beheadings [sic], and thanks to the systematic bombing and terrorizing of Libya’s prosperous coastal cities, the army of young thugs, reinforced by an army of local terrorists referred to on November 5th last, before the Libya invasion, by Lord James in the House of Lords , as ‘North African terrorists’ who had received ‘over a billion pounds’, presumably from the British taxpayer, but maybe from Jacob and Evelyn Rothschild, who are by far the biggest underwriters of military and terrorist finance in the world.

They can have an Arab ruler pay out fifty million pounds to terrorists and then have him attacked for it in the Sunday Times, which is what happened when Gaddafi financed the Provisional IRA during the eighties. He was merely paying protection money after several attempts to kill him. The Provisional IRA, as we should all know, was an MI6/MI5 front, and was used in Brighton in 1984 in an attempt to get rid of Mrs Thatcher, who was as stupid but not as spineless as David Cameron. Lord James was happy to say that he had run down his Irish accounts, though he said the North African ones were still ‘operational’, as the Libya operation has proved.

The horrific ‘liberation’ of Tripoli was filmed in Qatar, and one of the most civilized and prosperous countries in Africa was deliberately transformed into a hellhole. Of course, David Cameron didn’t see it coming. Like Blair before him, he thought it would all be over in a few months. Well, it won’t be over for years.

The Libyans will fight like lions as they fought against the Italians, when a million died. The Algerians next door kicked out the French in the sixties. Again a million died. We in the West are bullies and cowards and our soldiers can’t even defend us from a few bankers. (Ask former Chief of Staff General Guthrie, who supplemented his army pension with a Rothschild sinecure.) If the MOD is incapable of kicking down the door of NM Rothschild, they could at least send the British Army to Libya to secure the pipelines. One thing is certain: there will be very few casualties from ‘friendly fire’. Did Russia and China lay a trap when they refused to veto the ‘humanitarian’ operation in Libya? Former Def. Sec. Bob Gates seems to think so.

http://counterpsyops.com/ Another good site for Libya.

http://nsnbc.wordpress.com/ This guy is good and new to me. Christof Lehmann.

http://landdestroyer.blogspot.com/ This is Tony Cartalucci. Good stuff and he doesn’t miss the Rothschild hand.

The beheadings were witnessed by former US Congressman Fauntroy, who went into hiding in Tripoli. He said it was done by French and Danish special forces in Tripoli in the street. He said they killed both loyalists and rebels to show who was ‘in control’.

5 Responses to “The Rape Of Libya”