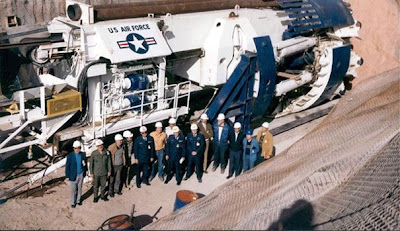 Photo of United States Air Force tunnel boring machine at Little Skull Mountain, Nevada, USA, December 1982. There are many rumors of secret military tunnels in the United States. If the rumors are true, machines such as the one shown here are used to make the tunnels. (Source: U.S. Department of Energy.) 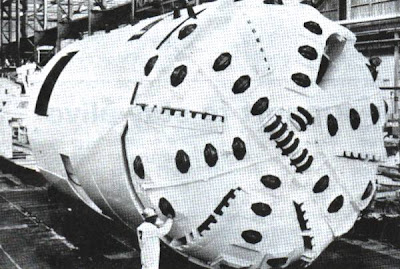 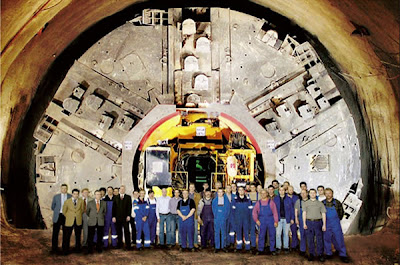 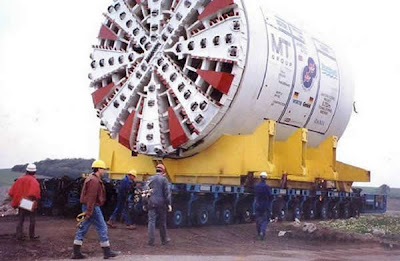 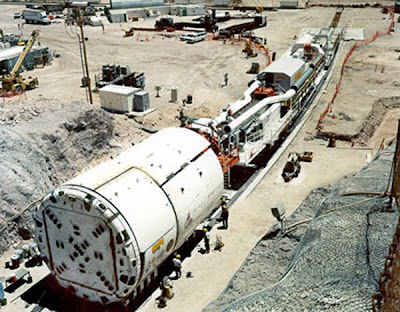 This is a $13 million tunnel boring machine (TBM) used for tunneling at the Nevada Test Site. (Remember that Area 51 is part of the test site.) Many other types of TBMs are used by many government agencies, including the ‘nuclear powered TBM’ [NTBM] that melts solid rock and leaves behind glass-like walls.

Most tunneling activity is under military installations and all information is highly restricted. Former employees of said facilities have surfaced over the years to talk of massive underground installations in places like Area 51, the Northrop facility in Antelope Valley, California (rumored to have 42 levels), and the Lockheed installation near Edwards, California.

TAP – The stories of underground bases seem like supposition on supposition on supposition. But for what it’s worth, I’m interested in putting our collective minds over the topic. Gillian in comments, amongst others, thinks Nibiru is real, the so-called twelfth planet arriving on 12th December 2012 to wreak havoc. Shane, my girlfriend is of the opposite opinion!! What is there from any authoritative source to indicate that the Nibiru story is true? We know that the powers that be intend to create as much fear as they can, to induce people to submit to greater state powers. That seems to be the main purpose of the scare-creating stories, in circulation.

The ‘Black Budget’ currently consumes $1.25 trillion per year. At least this amount is used in black programs, like those concerned with deep underground military bases. Presently, there are 129 deep underground military bases in the United States. They have been building these 129 bases day and night, unceasingly, since the early 1940’s. Some of them were built even earlier than that. These bases are basically large cities underground connected by high-speed magneto-leviton trains that have speeds up to Mach 2. Several books have been written about this activity.

The average depth of these bases is over a mile, and they again are basically whole cities underground. They all are between 2.66 and 4.25 cubic miles in size. They have laser-drilling machines that can drill a tunnel seven miles long in one day. I was involved in building an addition to the deep underground military base at Dulce, which is probably the deepest base. It goes down seven levels and over 2.5 miles deep. I helped hollow out more than 13 deep underground military bases in the United States.

TAP – Is this just more scare-mongering?

I took care of John Fialla, who was best friends with Phil Schneider. How many people know about Phil Schneider? Well, they were using tunneling machines back in the mid-90s that could tunnel through a rock face at seven miles per day, that could cut through a rock face with high-energy impact lasers that could blow the nano-sized particles of rock so that there was no debris left, forming an obsidian-like core, and laying an inner core for unidirectional maglev trains that travel at Mach 2 to 2.8 underground between these very very powerful and organized cities.

There’s 132 under the United States, an average of 5.36 to 7.24 cubic miles in size at an average of 1.5 to 4.5 miles underground, built, by and large, most of them in areas away from geotectonic areas – but there’s going to be lots of new geotectonic faults established when you have force 11, 12, 13, 14 earthquakes hit the Earth.

Why are they rushing to do this? Because they know that catastrophe is coming. And where’s this money coming from? It’s not coming from our regular Black Op budget. It’s coming from the illegal sale of drugs. In the United States there’s at least, by conservative estimates, a quarter of a trillion to a half a trillion of illegal drugs just sold in the United States that goes directly into underground budgets, and 90-95% goes to the DUMBs [Deep Underground Military Bases].

What is this certain catastrophe all about? Any ideas?
Let me see. UFO attack. Nibiru. HAARP. There’s three to begin with.
You have to admit. It’s puzzling trying to work out what disaster’s coming first, and when. Is this preparing for man-made catastrophe, alien or ‘natural’? We know that HAARP is being used to create weather destruction, and could be involved in earthquakes and volcanic activity. Why do we need even more to worry about? The UFO stories and the Nibiru ones seem superfluous.

Does anybody know? Or are TPTB simply going nuts with frustration as people refuse to get rattled by all their games?

See this post carrying Gordon Logan’s opinion that HAARP is the threat. It can be used to knock out the magnetosphere, making the earth vulnerable to pwerful sun activity known as the Carrington Effect.

The following was written by Richard Sauder, PhD, adapted from his book Underground Bases and Tunnels:

The nuclear subterrene (rhymes with ‘submarine’) was designed at the Los Alamos National Laboratory, in New Mexico. A number of patents were filed by scientists at Los Alamos, a few federal technical documents were written – and then the whole thing just sort of faded away.

Nuclear subterrenes work by melting their way through the rock and soil, actually vitrifying it as they go, and leaving a neat, solidly glass-lined tunnel behind them.

The heat is supplied by a compact nuclear reactor that circulates liquid lithium from the reactor core to the tunnel face, where it melts the rock. In the process of melting the rock the lithium loses some of its heat. It is then circulated back along the exterior of the tunneling machine to help cool the vitrified rock as the tunneling machine forces its way forward. The cooled lithium then circulates back to the reactor where the whole cycle starts over. In this way the nuclear subterrene slices through the rock like a nuclear powered, 2,000 degree Fahrenheit (1,100 Celsius) earthworm, boring its way deep underground.

The nuclear subterrene has an advantage over mechanical TBMs in that it produces no muck that must be disposed of by conveyors, trains, trucks, etc. This greatly simplifies tunneling. If nuclear subterrenes actually exist (and I do not know if they do) their presence, and the tunnels they make, could be very hard to detect, for the simple reason that there would not be the tell-tale muck piles or tailings dumps that are associated with the conventional tunneling activities.

The 1972 patent makes this clear. It states:

“… (D)ebris may be disposed of as melted rock both as a lining for the hole and as a dispersal in cracks produced in the surrounding rock. The rock-melting drill is of a shape and is propelled under sufficient pressure to produce and extend cracks in solid rock radially around the bore by means of hydrostatic pressure developed in the molten rock ahead of the advancing rock drill penetrator. All melt not used in glass-lining the bore is forced into the cracks where it freezes and remains …

“… Such a (vitreous) lining eliminates, in most cases, the expensive and cumbersome problem of debris elimination and at the same time achieves the advantage of a casing type of bore hole liner.”
(U.S. Patent No. 3,693,731 dated Sept. 26, 1972)
There you have it: a tunneling machine that creates no muck, and leaves a smooth, vitreous (glassy) tunnel lining behind.

Another patent three years later was for:

A tunneling machine for producing large tunnels in soft rock or wet, clayey, unconsolidated or bouldery earth by simultaneously detaching the tunnel core by thermal melting a boundary kerf into the tunnel face and forming a supporting excavation wall liner by deflecting the molten materials against the excavation walls to provide, when solidified, a continuous wall supporting liner, and detaching the tunnel face circumscribed by the kerf with powered mechanical earth detachment means and in which the heat required for melting the kerf and liner material is provided by a compact nuclear reactor.

This 1975 patent further specifies that the machine is intended to excavate tunnels up to 12 meters in diameter or more. This means tunnels of 40 ft. or more in diameter. The kerf is the outside boundary of the tunnel wall that a boring machine gouges out as it bores through the ground or rock. So, in ordinary English, this machine will melt a circular boundary into the tunnel face. The melted rock will be forced to the outside of the tunnel by the tunnel machine, where it will form a hard, glassy tunnel lining (see the appropriate detail in the patent itself, as shown in Illustration 41). At the same time, mechanical tunnel boring equipment will grind up the rock and soil detached by the melted kerf and pass it to the rear of the machine for disposal by conveyor, slurry pipeline, etc.

And yet a third patent was issued to the United States Energy Research and Development Administration just 21 days later, on 27 May 1975 for a machine remarkably similar to the machine patented on 6 May 1975. The abstract describes:
A tunneling machine for producing large tunnels in rock by progressive detachment of the tunnel core by thermal melting a boundary kerf into the tunnel face and simultaneously forming an initial tunnel wall support by deflecting the molten materials against the tunnel walls to provide, when solidified, a continuous liner; and fragmenting the tunnel core circumscribed by the kerf by thermal stress fracturing and in which the heat required for such operations is supplied by a compact nuclear reactor.

This machine would also be capable of making a glass-lined tunnel of 40 ft. in diameter or more.

Perhaps some of my readers have heard the same rumors that I have heard swirling in the UFO literature and on the UFO grapevine: stories of deep, secret, glass-walled tunnels excavated by laser powered tunneling machines. I do not know if these stories are true. If they are, however, it may be that the glass-walled tunnels are made by the nuclear subterrenes described in these patents. The careful reader will note that all of these patents were obtained by agencies of the United States government. Further, all but one of the inventors are from Los Alamos, New Mexico. Of course, Los Alamos National Lab is itself the subject of considerable rumors about underground tunnels and chambers, Little Greys or “EBEs”, and various other covert goings-on.

It stated:
Tunneling costs for NSTMs are very close to those for TBMs, if operating conditions for TBMs are favorable. However, for variable formations and unfavorable conditions such as soft, wet, bouldery ground or very hard rock, the NSTMs are far more effective. Estimates of cost and percentage use of NSTMs to satisfy U.S. transportation tunnel demands indicate a potential cost savings of 850 million dollars (1969 dollars) throughout 1990. An estimated NSTM prototype demonstration cost of $100 million over an eight-year period results in a favorable benefit-to-cost ratio of 8.5.

…Was the 1973 feasibility study only idle speculation, and is the astonishingly similar patent two years later only a wild coincidence? As many a frustrated inventor will tell you, the U.S. Patent Office only issues the paperwork when it’s satisfied that the thing in question actually works!

http://www.projectcamelot.org/underground_bases.html
Link sent in by ME in comments.