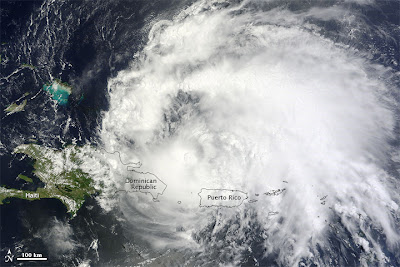 As if recent earthquakes (Virginia, Colorado) and pluming volcanoes (Dutchsinse) on the West Coast were not enough to keep the USA busy, HAARP-induced weather wars are also grinding on, with ‘countries’ sending evil weather systems around the globe to wear each other down. As stated by ‘Gordon’, our resident ex-spy in his recent emails to The Tap, HAARP systems worldwide are all under the control of the elites, and the weather wars, with their attendant geological ‘play’, are being run as a general way to beat the world down.

Earthquakes are rare in Virginia, once in a hundred years. Hurricanes in NYC are also very rare, as they usually start down by the Caribbean and make US landfall further South. The fear has always been what will happen when a hurricane makes it as far north as New York City.

This news report suggests that exactly that is now going to occur. Hurricane Irene is building, and is already the biggect hurricane to approach the East Coast for a generation. She is being directed by HAARP to land on The Big Apple, if this report is any guide.

FT – The governor of New York declared a state of emergency on Thursday as the eastern coast of the US braced itself for Hurricane Irene.
Andrew Cuomo said in a statement that the declaration would allow the state to assist counties, cities and towns “more effectively and quickly”.

The hurricane is tacking west from the Caribbean on a course that could take it to New York City by Sunday.

In the neighbouring state of New Jersey, up to 750,000 people have been mandated to evacuate the coastal resort region of Cape May County. The holiday destination, which has nearly 100,000 year-round residents, sees its population swell over the summer.

Lenora Boninfante, the public information officer, said: “A mandatory evacuation order has been put in place from 8am tomorrow. Visitors have been asked to go home, while those planning to arrive this weekend have been told to hold off until next week.”

On Thursday, Irene was still a category 3 storm, with wind speeds of up to 125 miles per hour, according to the National Hurricane Center, making it potentially the largest to hit the east coast since 1985, and threatening residents and transport systems with powerful gusts and heavy rain.

Irene was estimated to first hit the Outer Banks, the holiday destination off the coast of North Carolina, early on Saturday. All tourists have been told to cut their vacations short and evacuate the area.

They said what on earth would happen if the big one were to hit New York. It looks like we might be going to find out shortly. It is very rare for a hurricane to make landfall so far North, but HAARP can be used to deliver it to target.

From ME in Comments –

A response to dutchsinse’s video above

Also note that the “haarp lines” are coming from the direction of National Atmospheric Ionospheric Center, NAIC, located in Arecibo, Puerto Rico, a military installation constructed between 2005-2010 for $70 million that some say is the biggest﻿ U.S. HAARP related facility.”

EXTRACT –
It’s been several years since a hurricane has taken the path west of Florida.

UPDATE – Not the full-on devastation that might have been, thank God. The hurricane travelled an odd course to fulfil the prediction of hitting NYC. No doubt there will be more. The elite seem to like attacking NYC. It’s become a habit.

Damage listed out state by state on WSJ .

According to Gordon Logan, China says that covert environmental warfare is set to get much bigger, and people need to be told what is happening. I’m trying my best!

3 Responses to “Weather War About To Hit NYC”