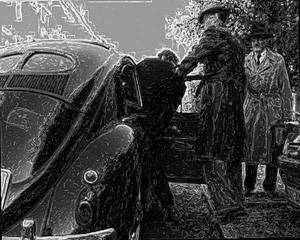 80% of Gestapo investigations started from members of the public reporting on each other.

The elites who currently control the world fear the loss of that control.  Their fears are currently focused on the threat that an educated middle class might represent.  They like working classes and those elements in society that accept a submissive role, without expectations of any change in the status quo.  The middle class does not fit that profile.


This infowars post explains that the British Police are asking the public to report anyone who holds anti-government views to them.

The London Metropolitan Police is encouraging businesses and the general public to immediately report anyone who holds anti-government political beliefs to the authorities as terrorists, calling on people to become volunteer informants as the state prepares for widespread social unrest.
“This was the surprising injunction from the Metropolitan Police issued to businesses and members of the public in Westminster last week,”reports the London Guardian.

………….if you want an insight into where the British government thinks this is all heading, look no further than a 2007 Ministry of Defence report which foresaw “the middle classes becoming revolutionary” and “taking on the role of Marx’s proletariat” within three decades.
“The world’s middle classes might unite, using access to knowledge, resources and skills to shape transnational processes in their own class interest,” warns the report, predicting mass unrest and social dislocation.
This is why the authorities are already putting the squeeze on any kind of political beliefs that could be construed as anti-government. They are aware of the fact that the increasingly dangerous, unjust and economically deprived post-industrial revolution now being used to eviscerate the middle class in the west will provoke a hostile and radical reaction.
Encouraging people to report on each other for political beliefs deemed undesirable by the state is precisely what happened in Soviet Russia and Nazi Germany.
One common misconception about Nazi Germany was that the police state was solely a creation of the authorities and that the citizens were merely victims. On the contrary, Gestapo files show that 80% of all Gestapo investigations were started in response to information provided by denunciations by “ordinary” Germans.
“There were relatively few secret police, and most were just processing the information coming in. I had found a shocking fact. It wasn’t the secret police who were doing this wide-scale surveillance and hiding on every street corner. It was the ordinary German people who were informing on their neighbors,” wrote Robert Gellately of Florida State University.
Gellately discovered that the people who informed on their neighbors were motivated primarily by banal factors – “greed, jealousy, and petty differences,” and not by a genuine concern about crime or insecurity.
The Tap Blog is a collective of like-minded researchers and writers who’ve joined forces to distribute information and voice opinions avoided by the world’s media.

3 Responses to “UK Government Declares War On The Middle Class”